After Turkey -- The Bill is a weak episode in the series. Don't expect much. Cole would occasionally have stories centered around younger people, and they weren't always the best. The last one in this category was Self-Made Hero. Sentimental stories were not a strong aspect of Cole's writing. The story strains the listener's credulity... but a weak Casey is better than most shows, and the superb cast and interplay of the characters despite the weak storyline is still entertaining.

Joe Bowers, 20, a recent graduate from a reform school, has taken his old sweetheart, Lottie Newcomb, to a restaurant for a Thanksgiving dinner. Joe finds her not too interested in him and he suspects her affections have been transferred to his cousin Ferd. Lottie doesn't deny that she likes Ferd - also that she feels Joe's past career as a petty criminal is not conducive to her future hopes about his abilities as a husband. Joe is about to pay for dinner when he makes an embarrassing discovery - his wallet is empty. Thinking he has left his money at home, he excuses himself, puts on his bright new blue coat, asks Lottie to wait till he gets back and rushes out of the restaurant. Consequently, a filling station is held up by a youthful bandit wearing a bright blue overcoat who escapes with several hundred dollars. Casey and Ann are assigned the the case. The excitement mounts as Joe's identity is quickly discovered and he is arrested.


Logan has off for Thanksgiving... the character is replaced by Sargeant Healy. We learn later that Logan always takes Thanksgiving off... and because of that Healy hasn't been able to for 25 years. There is no on-air credit for the actor who plays Healy.

5:35 The description of Joe's coat is important to the story -- it's done to be sure someone will notice it. Cole uses the waiter's dialogue to give us the description -- it sure sounds like an ugly coat!

6:45 Casey puts Tabasco sauce on his turkey... I know Tabasco is a magical substance, but I've never heard of it on turkey... especially on Thanksgiving turkey.

7:22 Walter answers the phone and says it's for Casey. No indication who is doubling for Walter's lines. As part of the call, Burke relays a description of the coat word by the hold-up man.

11:13 The puddle of grease that the hold-up man stepped in is mentioned. It's important to the story.

12:30 Gus the waiter steps into the gas station scene and says he knows the perpetrator because he heard about the coat.

20:20 It's clear that there's a frame-up going on: Ann thinks for certain that Ferd is framing Joe. As the discussion ends, Casey lays out the evidence, especially the grease puddle, but does not have it figured out yet, but doesn't agree with Ann.

21:20 Casey visits Lottie Newcomb's father. Her father feels bad about what she's been going through in her confused infatuations with Joe and Ferd. Ann goes to the living room to comfort Lottie.

22:10 Casey starts to ask him a question and stops... it's clear that Casey is thinking a little bit longer before he speaks and changes direction of his questions.

23:40 Casey realizes Mr. Newcomb covered his own shoes with grease by hand! The grease he used was not from the gas station. He was willing to take the rap so that Fern and Lottie could be together. He changes his story... saying that he found Joe Bowers' grease-covered shoes hidden in the cellar. Casey knows Joe did the crime, and says they should all go down to the station, and that the truth will be learned there.

25:25 Marvin announces that they'll return to the Blue Note. Then a local commercial for Anchor-Hocking begins with announcer Harry Marble. He worked for CBS and northeast stations in his career, as an announcer and newscaster, mainly in Boston area. You can hear the engineer bring up the national feed after this local commercial. This implies that this recording was an aircheck made by on behalf of the A-H ad agency to check this localized ad.

26:45 The story is explained at the Blue Note. It turns out Joe was the culprit who tried to frame his cousin Ferd for the crime. It's a happy ending where Lottie and Ferd will be together, and Casey has new respect for Lottie's father.

Whitestone and Evans is the intersection for the story's gas station hold-up. Whitestone is a section of Queens in New York City. Cole would have been very familiar with it. He used the name Evans as a character name in Lady Killer. Cole would occasionally recycle names, and figuring out the personal connection to Cole, if any, can be a challenge. 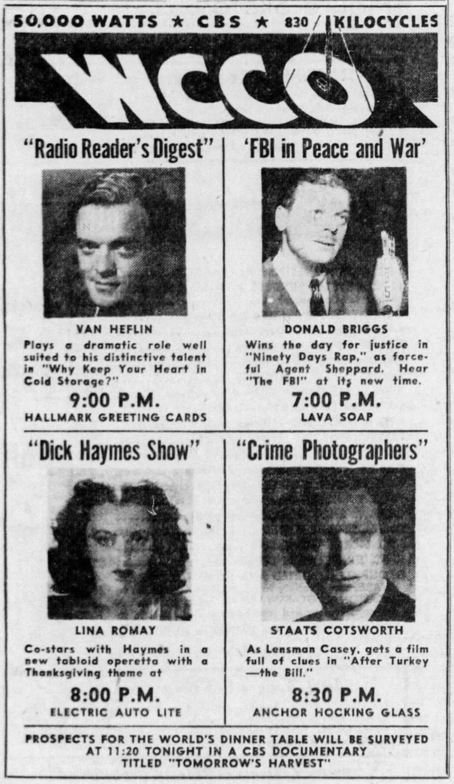