The Upholsterer was repeated twice on the series, 1949-11-17 and almost exactly a year later on 1950-11-16. It is possible that the second network broadcast was transcribed as there are no notes for it in the Cole document and it was the final broadcast for Philip Morris, and assumed to be the final broadcast forever. The only copies that exist are AFRS copies. It's a below average production with what seems to be lots of time-filling dialogue and little real action.

There are many episodes left to post (7, then 2 revival episodes) but now is as good a time as any to make some comments related to the repeat episode of The Upholsterer. The 1950-11-16 episode is the final episode of the series as far as the cast and producers were concerned. The 1954-1955 revival would have been considered crazy at this time; no one would have thought it was possible or even necessary. Philip Morris let its sponsorship contract expire with the 1950-11-16 episode, and like others, were taking their ad dollars elsewhere. The action for drama on CBS had shifted strongly to Hollywood, and New York would be the source of CBS' daytime soaps. Casey went on to television where it did very badly, but was broadcast from April 1951 through June 1952. John Gibson was the only holdover from the radio cast, and they even replaced him after a while.

Casey is assigned to cover a story involving the death of one Mr. Goldblatt, found dead in his upholstery establishment. The baffling question facing the police is How did the killer, after shooting the old man, manage to leave a chair against the locked door - inside?  An old overstuffed chair with an address tag attached to it gives Casey his first cIue,  He and Ann visit the address and meet Mrs. Potter there who tells them she let Mr. Goldblatt take the chair to his store that morning for repairs.....  She goes on to say that it was removed from the room of one of her boarders - and that he flew into a rage when he discovered it missing. Casey and Ann visit the man's room and are doing some snooping around when Suddenly the door opens and they are face to face with a murderer - and a thief.. for it is later revealed that this man not only killed Mr. Goldblatt but also pulled one of the biggest robberies which, up to this moment, had seemed unsolvable.


In following up the report of the crime, the beat cop asks a kid break a window, and then let the cop in by unlocking the door from the inside. Doesn't that seem like the possibility of contaminating a crime scene? They find Goldblatt dead, and there's no one hiding in the shop, and there's no gun. It's a locked room mystery, a favorite of writers.

7:55 Casey, Ann, and Logan are at the crime scene. The question they're grappling with is how the killer got out when a chair was up against the door. Goldblatt used to prop a chair against that door at the close of every day because he was always afraid of being robbed.

9:35 The body was near the furniture that Goldblatt was repairing. This is where later Casey notices that one chair is carefully attended to, and another has been cut almost haphazardly with a blade.

10:04 Logan is so befuddled he asks Casey to help solve the crime! "I'm just a newspaper mug, pal" is what Casey says. Logan is disappointed because they have made no progress solving the robbery of $80,000 (almost $1 million in 2020 dollars) of Charles Casimir. 11:00 Logan asks Casey for help another time since his hunches sometimes work out. The dialogue seems quite padded, much like the sofa.

11:50 Casey notices that a chair has had its covering very carefully removed, which is odd since Goldblatt's work was usually to put new upholstery on furniture, not to use the older covering. He also found another chair that had big knife cuts in it the covering. Casey has a hunch!

13:43 Casey ponders the nature of the noise in the shop after the shots. He thinks the noise was the fall of a chair that was piled on top of another, not the fall of Goldblatt's body.

15:40 They arrive at the rooming house address that sent the chair to Goldblatt's shop, believing that the clue to the mystery will be finding the reason for the repair and who sent it.

16:50 Casey and Ann pose as husband and wife to meet Mrs. Potter, the landlady. There are some funny moments. Casey notices a reupholstered chair, and she says that she sent a chair there just yesterday. She says the chair had no cuts, it was just shabby. The tenant who had that chair was quite upset when he realized that the chair was sent away. The tenant was the bookkeeper for Charles Casimir! (Gee, what a coincidence!) Now we know what happened... there was something in the chair... the loot from the Casimir robbery!

22:13 The bookkeeper comes home from work... early! Casey disarms him as he fires two shots, and knocks him out! The bookkeeper had killed Goldblatt and Casimir. He stole the money from Casmir and hid the money inside the chair that was sent to Goldblatt.

Other episodes have involved furniture: 1946-09-19 Duke of Skid Row had a crown hidden in a special compartment in a chair; 1947-11-06 The Case of the Blonde Lipstick had the lipstick stuck between cushions.

There are two different AFRS releases of the 1949 version and one release of the 1950 version that are in circulation.

49-11-17  COPY 1 The AFRS announcement follows Ann's last bit of dialogue and is "This is the United States Armed Forces Radio Service, the voice of information and education." No cast information is given.

50-11-16 After Ann's last line, some brief closing music follows. The AFRS announcement is "This adventure of Crime Photographer starring Staat [sic] Cotsworth as Casey, came to you through the worldwide facilities of the United States Armed Forces Radio Service, the voice of information and education." This recording close matches the AFRS that of the recording of 50-11-09 Woman of Mystery, which is how it is identified.

There are no newspaper clippings for the 1950 broadcast.

This clip from Billboard reports the demise of the series with the November 16, 1950 episode. 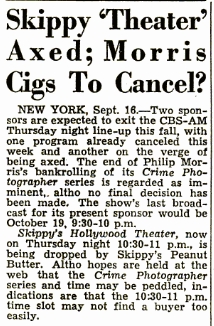