Witchcraft is a below average Casey episode that relies on Cole's established knowledge of superstition and common stereotypes of the Amish "Pennsylvania Dutch" area of Pennsylvania. There are some interesting elements as to the locale of the story and an interrogation Casey conducts that seems to be a cruel way to treat a frail elderly man (Elisha Kraft) who has strongly held beliefs in hexes and superstitions. The scene seems overplayed and is actually disturbing.

About 3:00 A.M. on a cold winter morning in a queer rural community known as Frogtown, we find Casey at the scene of a fire. After flames are gotten under control, the firemen uncover the body of an old man who had bean murdered -- stabbed through the heart. To get information, Casey pays $250.00 to Mary, a sly, old half-gypsy fortune teller, who tells Casey and Ann to visit Elisha Kraft. Casey and Ann visit Kraft, a sickly old man who tells them that he had a spell. the night Amos Jenkins was murdered and that his hired man and Dr. Gustav Hoffman had been with him until three that morning. Casey and Ann leave to check Kraft's alibi and learn that although Kraft had been sick tor a year, Dr. Hoffman had only been consulted a few times during the past month. They also learn that Kraft believes in witchcraft and decide to pay him another visit. When Casey tells Kraft that he knows pow-vow magic and that he is a hex-master, Kraft confesses to Casey and Ann that he had been going to pow-wow doctor Lud Aubrecht who tells him that a hex had been put on him by Amos Jenkins and that he will not get better until a bigger hex is put on Jenkins. He tells Kraft to get a lock of Jenkin's hair and he could then work big magic. Kraft goes to Jenkins house to get a lock of hair but fails when Jenkins wakes up and chases him. Lud Aubrecht comes in with a shot gun as Kraft is confessing to Casey and Ann and threatens to kill the three of them. As he pulls the trigger, Logan, who had been listening through the window, shoots him. Aubrecht later confesses to the police, telling them that he went back to Jenkin's house later and as he snipped off the lock of hair, Jenkins woke up and Aubrecht stabbed him through the heart with the scissors and then set tire to the house. He explains that he only wanted a lock of hair because he know that when he showed it to Kraft, and told him he was going to work a powerful counter-hex against Jenkins with the lock of hair, Kraft would come accross with a lot more money...


"Frogtown" is the name of an area of St. Paul, Minnesota, where Alonzo Deen Cole was born.
https://en.wikipedia.org/wiki/Frogtown,_Saint_Paul In the episode, Frogtown may be a local section of town in Casey's city, but the elements Cole uses are actually from farm country in Pennsylvania. This program focuses on hexes and other superstitions that one would learn about by visiting Amish country near Lancaster, PA, about 175 miles drive from midtown Manhattan. It is a quaint and enjoyable area with much to do and some marvelous food. https://www.discoverlancaster.com/amish/

2:50 Casey is told that Frogtown citizens do not want their picture taken. https://amishamerica.com/what-do-amish-think-about-photography/

12:45 Casey hatches a plot to have Ann visit a fortune teller, Gypsy Mary, while he is at an outside window of the house. He will take a picture as Ann slips $250 to Gypsy Mary... that's $3,000 in 2020 US dollars... and it's the balance of Casey's horse race winnings! Instead, Mary realized it was a bluff, and calls to Casey and has him come inside. She says they should go see Elisha Kraft.

18:20 Kraft refuses to have his picture taken in a very panicky way.

19:35 Casey says that some barns have fake painted windows on them as "witch catchers." Cole may have made this up for the story. The use of hex signs for this purpose is more legend -- some hex signs were just made because they were a form of folk art, and nothing more.

21:25 Casey is very aggressive with old Elisha Kraft, showing him that he had a picture of him and that Casey was a hexmaster. The superstitious Kraft is very frightened. It's almost cruel the way Casey confronts him. At 22:50 Aubrecht enters the scene and threatens everyone. 23:35 Logan enters and shoots Aubrecht in the shoulder.

In the Blue Note epilogue we learn that Casey bet all his previous winnings on the horse Hexmaster, and lost it all.


1948-02-11 CBS Press Release
Note the different locale of the episode in the press release headline. 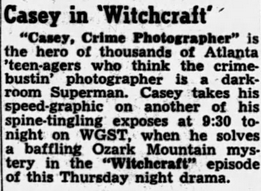 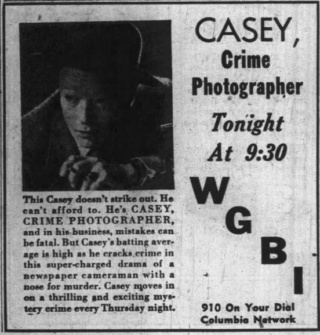