Woman of Mystery is a repeat of Mysterious Lodger, one of the worst episodes of the series. Details are at https://bluenotebulletin.blogspot.com/2020/01/1947-03-06-mysterious-lodger.html

This time the corpus delecti is an attractive young woman who has been stabbed in the back by an obviously powerful man, The police find out that she has been a convicted murderess herself, that she had stabbed her lover and spent several years in prison for her crime. Her landlady says that the brother of the man she murdered has been seen hanging around her lately - and when the cops go to bring him in, he shoots it out with them - and he's killed in the process. It Looks like an open and shut case .. the brother obviously was the killer... But then Casey arrives on the scene. He corroborates the story that the police have learned from the young woman's landlady. And, for some reason, he doesn't believe it's quite as much of an open and shut case as the police believe. Casey develops a theory that the police hadn't even thought of - he unreels some of the peculiar quirks in human nature which ultimately portray the real murderer - the landlady.. 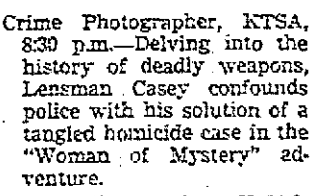 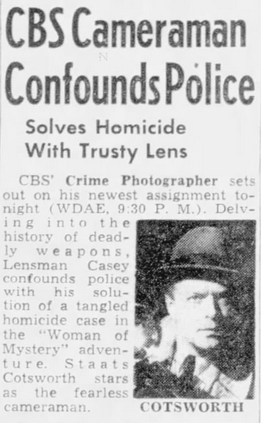 1950-11-11 Moline IL Dispatch
This is a review of the episode. The Casey series was not well-liked by reviewers, so the tone is not a surprise. It's too bad the reviewer based it on one of the weakest entries of the series. 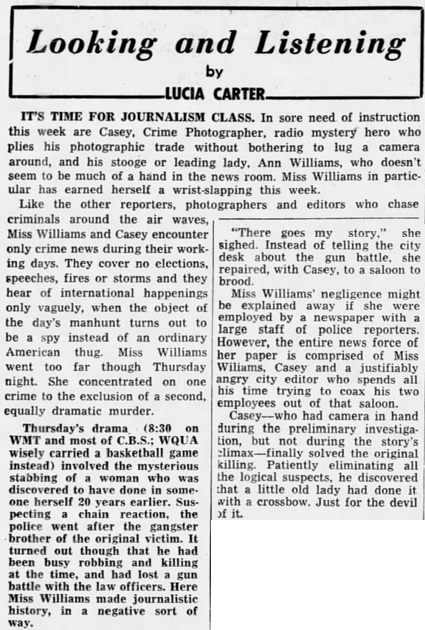