Wanted: A Gun is a slightly below-average entry in the Casey series. It has a pet store owner selling illegal guns to those who seek them. In the gangster lingo of the time, he's selling gats and cats! There's misdirection of motives and suspects involving rival business partners who want a big payday alone and not the other, a murder with confusing purpose and perpetrator, and attempted poisoning, too. It's all in a day's work for Casey and Ann. And the special at the Blue Note is pigs knuckles and sauerkraut! There's nothing really bad about the episode, it's good to hear the cast play it all out, but there's nothing really compelling about the endeavor.

A jealous husband purchases a gun - later he is found dead. The wife is questioned.  Soon after another murder ls committed - this man was an admirer of the first dead man's wife. It appears that she used the second man to rid herself of a jealous husband - and then wanted him out of the way also.  A corner torn from a $100 bill and saturated with perfume is found in the latter dead man's hand - the matching remainder is discovered in the woman's purse. Investigation shows us that the woman had no part in the murders - that the killer planted the same perfume that she was accustomed to wearing on the torn $100 bill so as to throw suspicion toward the woman.


This show is often confused with another show, 1948-05-27 #239 Gun Wanted. It is misidentified as circulating in the Siegel & Cox book and Wanted: A Gun is noted as missing. Key tipoff: the Gun Wanted episode would have Bill Cullen as the announcer because the date places it in the Toni run. Because Ken Roberts is the announcer, it is part of the Philip Morris run. The ADC continuity notes make it very clear that Gun Wanted is a much different episode, with the plot centered around a storekeeper murdered by a gangster.

The story begins with a Mr. Mercer entering a pet shop owned by Mr. Paxton. Mercer was told was Paxton was able to quietly procure guns. He wants to protect himself from a criminal being released, Jeff Robbins, who had threatened Mercer and Robbins wife whom he suspected of cheating. 2:21 Mercer is shocked when the gun will cost $75. That's $825 in 2020 dollars.

Pigs knuckles and sauerkraut is what's being offered at the Blue Note today. https://www.curiouscuisiniere.com/german-roasted-pork-knuckle/

Burke calls the Blue Note and tells Casey that Jeff Robbins has been shot. At 4:45 Casey and Ann are with Logan at the alley where Robbins was shot. Logan knows that Robbins was "green-eyed" (jealous) about Mercer.

6:00 Business partner Carl Bantry identifies the body. Bantry and Robbins were in the chemical business. 7:40 Mercer is brought to the scene and the police found the gun with two chambers fired. He says he didn't fire the gun and did not kill Robbins. 8:30 Paxton denies selling the gun, and denies selling guns at all.

10:45 Casey is suspicious that Paxton used the gun on Robbins before giving it to Mercer to frame him. Paxton may have done both because he was interested in Mrs. Robbins, too. This theory of the crime turns out to be incorrect.

11:40 Mrs. Robbins perfume is mentioned, and is important as a diversion planted by the real killer. Logan and Casey stumble over each other getting the widow a glass of water.

14:40 Casey and Ann find Paxton murdered... poisoned... and the odor of Mrs. Robbins perfume is in the air.

16:25 Casey and Ann find the corner of a $100 bill saturated with her perfume. They decide to confront Mrs. Robbins. 17:55 Casey looks in her handbag and finds a stack of $100 bills, one of which has a corner missing. The discussion leads to the possibility of Bantry being involved in the crime. Mrs. Robbins would inherit the share of the partnership. By framing her for the crime, Bantry would own the company free and clear. Casey has a hunch that Bantry is behind it all (the death of Robbins and the framing of Mercer). Casey asks her to invite him to her apartment, and to offer him a drink.

21:55 Just as Bantry and the widow are about to clink glasses, Casey and Ann come out from where they were hiding. The tell Mrs. Robbins not to drink from the glass. They're convinced she was about to be poisoned. Casey slugs Bantry and knocks him out.

Back at the Blue Note, we learn that Bantry confessed to the police that a new chemical formula that toughens plastic was developed while Robbins was in jail. Because Robbins was not involved in creating it, Bantry wanted all the profits for himself because it was valued at $100,000 ($1.1 million in 2020 dollars).

The AFRS closing, after some music, is "Tonight's adventure was written by Alonzo Deen Cole. Staat [sic] Cotsworth played the part of Casey, Jan Miner was Ann, and John Gibson was Ethelbert. Next week, another adventure of Casey, Crime Photographer! This is the United States Armed Forces Radio Service, the voice of information and education."

There are no newspaper clips of consequence, but this one shows the popularity of the program among photographer professionals. 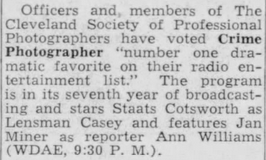