Action Photograph is one best example of how different Casey storylines became under the Toni sponsorship with the emergence of "nice gangsters" by the end of the program. In the episode, Casey commits a convincing photographic fraud, with skill of the kind that would not be available until decades later with computers with Adobe Photoshop! And that fraud is combined with his own blackmail scheme to help a friend reclaim his ex-fiance from the arms of another. This could be the worst Casey episode ever, but we haven't written about Thunderbolt (1949-11-10) yet.

This is the last new episode that was not a repeated script found in the Casey series in decades -- it started to circulate about a dozen years ago. What did OTRdom and Casey fans do so wrong that we needed to be punished with this episode?

Casey is torn between boyhood loyalties and his duty as a newspaperman when he is assigned to cover a gangster killing in the neighborhood where he grew up. Although Casey knows who the murderer is, as do most of his former neighbors, he decides to remain silent rather than be judged a stool pigeon by his old friends. His mind is changed, however, when he learns that the murder suspect has double-crossed one of his best pals. Setting out to get evidence to nail the killer, Casey sets a trap which nearly snaps shut on him.


1:56 Bill Cullen asks "Does your loveliness depend on the weather?"

The story starts with the murder of gangster John Habano. Casey and Ann follow the investigation. There are gangsters in the story whom Casey knew from childhood. "Silk Farrell" is one, and Alan Bancroft is the other. Older gangster Tony Angelo was a friend of Casey's father. Silk is suspected of being Habana's killer.

Casey once sang tenor in a youth singing quartet group with Silk, Frankie Pizarro, and Gus Hoffman. Everyone except Casey went into Silk's gang.

9:56 There's a fight in the bar between Silk and Alan Bancroft over Silk's girlfriend. Constance Maxwell, the "society dame with all the dough." Constance was Bancroft's fiance. Silk knocks Bancroft out. Casey drives Bancroft home.

Al spills his guts to Casey, and Casey develops a scheme to help Al retrieve the affections of Constance once more.

13:50 Bill Cullen catches up with Ethelbert who is brushing up on his boxing techniques behind the bar. After Ethelbert says how attractive Constance was, Bill says she was probably a Toni user. Ethelbert does the usual "that's a lotta women" tagline. Yuck.

16:00 Casey visits Tony who reluctantly tells him about the murder. Casey wants to be careful about protecting Tony from being suspected as a snitch. Based on what Casey learns, he gets enough information to fake a picture of the getaway car with Silk's gang inside after the killing. In the 1940s, this required an incredible amount of skill to assemble this many images and make it look like it was a real shot. It's not credible. It's hard enough to do it in Photoshop to be convincing. Cole relies on the lack of technical photographic knowledge of the audience that it's possible to do such work and have it be undetectable.

20:00 Casey "blackmails" Silk into letting Al beat him up in front of Constance. If this is starting to sound like the gimmick of the Self-Made Hero episode, you're right. That was teenagers. This is gangsters acting like teenagers. Al slugs Silk and all is well. Al and Constance leave and she puts the engagement ring back on. But wait, there's more.

22:30 Silk and Casey have an argument over the picture, and he threatens Casey with a gun. Silk's guys enter the room. Stereotypical lines from the gang members are delivered like "I'd like to shake hands only it gets kind of difficult when I got a tommy gun in my mitt, like now" and "pardon my sawed-off shotgun." Silk lays it on think that Casey is going to be killed and his body thrown in the river. Silk shoots... a blank... to get back to Casey for his little blackmail scheme. The gang has a good laugh over the gag. They all start singing "Roll Out the Barrell."

26:58 The Blue Note epilogue has a lot of information, but it can't save the episode. Casey's not there because he's home resting his voice since the gang had a full night of singing. At 27:27 we learn that the gang members of the quartet were all killed in their car in revenge for the killing for Habano. Ann says the police nabbed the killers, but she does not name who they were.

Great Grandfather's Rent Receipt was a bad episode, but that was adapted from Witch's Tale. Action Photograph is a bad episode all by itself.

The episode shows how the Toni sponsorship changed the show for the worse. The core story is about two men fighting for the affection of the same woman. The dialogue in the final scene is awful, and the idea of the old quartet back together to sing seems more like a bad high school play than a big high-profile crime series. The stories are sanitized of even mild violence and devoid of real tension. Violent acts are referred to in dialogue after they have happened. Perhaps real tension would make the listener's hair curl without Toni, and that's why they avoided it.

"Silk Farrell" is an interesting choice of name because Staats Cotsworth was one of the actors who played the lead in Front Page Farrell, a radio soap opera about a newspaper reporter. The serial was produced by Frank and Anne Hummert, producers of Mr. Keen and over one hundred other series over the decades.
Wikipedia https://en.wikipedia.org/wiki/Front_Page_Farrell
Episodes http://otrrlibrary.org/OTRRLib/Library%20Files/F%20Series/Front%20Page%20Farrell/ 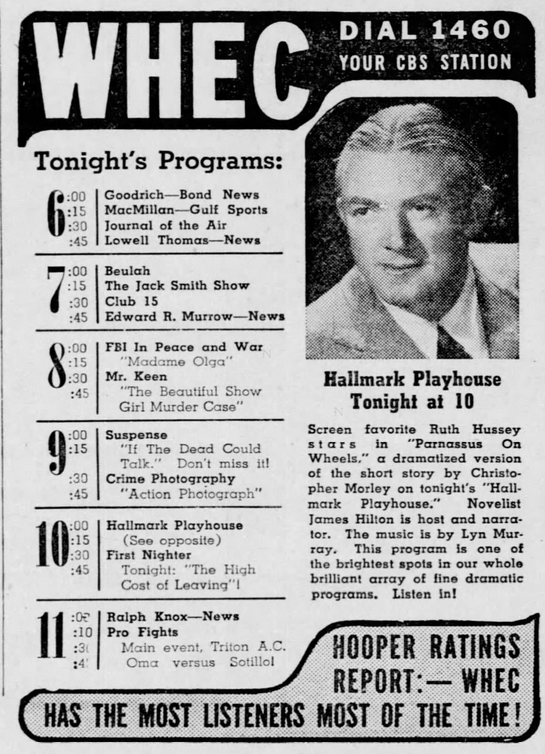