The Fix is a typical Casey episode with gangsters, suspicion of police corruption, Casey is in a fight and all is set right in the end as the gangsters get their due, the police do their jobs, and the Blue Note epilogue ties it all into a neatly wrapped bundle. The original title may have been "These Six," which is noted in the CBS press releases and newspapers. There seems to be no reason for such a title. Don't discount that it could actually be bad handwriting that was misread, the notes were transcribed and the misinformation was sent out to the newspapers at a time that was too late for correction.

At the Blue Note Cafe, we find Casey, Ann and Ethelbert, chatting with Archie Purcell and his girlfriend, Mildred Sells. After Archie and Mildred leave the cafe, Ethelbert tells Casey and Ann that he overheard Archie mention to Mildred that he had bought ringside tickets tor the fight. Casey gets suspicious because with the job Archie has, he can't afford to buy such expensive tickets. Casey and Ann decide to inform Lt. Frank Purcell that his son, Archie, is running around with Mildred Sells, stooge for crooked political leader, Tim Lansing (Old Iron Hat) and while they are at Purcell's office, Purcell receives a tip that a poker party is going on in a hotel suite. Casey and Ann tag along with Purcell who learns from the gamblers that they paid his son $1000 tor protection. Later, when Archie Purcell is found in an alley brutally beaten and robbed, Casey questions Mildred Sells. Mildred is terribly worried about Archie and she tells Casey the whole story of why she was working for Lansing. Lansing has in his possession a letter she had written to an old boyfriend, Mike Warren, who was murdered, and although she did not kill Mike, she had threatened him in the letter. Lansing holds this over her head in order to get her to work for him. When Mildred completes her story to Casey, in walks Lansing who had Casey taken tor a ride and held in a beachhouse. Not long after, Mildred is also taken there by Lansing's men and they are both tied up when the thugs decide to see the fight. Lansing, thinking his men are at the beachhouse with Casey and Mildred shows up alone and is attacked by Casey who has freed himself from the ropes just in time. During the scuffle, Lansing shoots Casey in the shoulder with a gun that he had kept hidden in his hat, and which is later found to be the gun that killed Mike Warren. Mildred is cleared of all suspicion and she end Archie now look ahead to a happy future.


In the opening tease for the episode, Ethelbert mentions the fraternal organization "The Odd Fellows" https://en.wikipedia.org/wiki/Odd_Fellows

Does "Butch" sound like Lenrow (Logan) is doubling with a rather bad gangster voice?

3:02 Ethelbert makes his usual comment "Blondes! Wow!" Ann has no comment, but has commented negatively about being brunettes left out of consideration for their attractiveness... which remains funny because the Casey comic book always depicts Ann as blonde.

4:35 Ethelbert says Archie bought the tickets from a scalper for $200 ($2,400 in 2020 US dollars). Ticket "scalping" was likely illegal at that time https://www.legalzoom.com/articles/who-needs-tickets-is-ticket-scalping-legal  Laws have been changed since that time to allow re-selling of tickets through online services such as StubHub and others.

19:46 There's a firearm in the scene as Casey is about to be abducted and he says "That gun in your hand makes me agree to that."

24:00 We know why Lansing has the name "Iron hat." He says his hat is an old derby. The phrase was a name for a man's hat, but it also can refer to a safety helmet. https://en.wikipedia.org/wiki/Kettle_hat 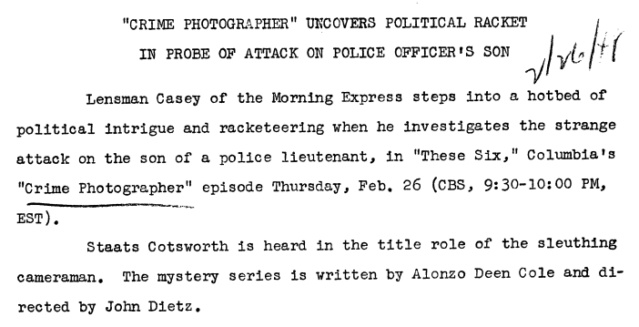 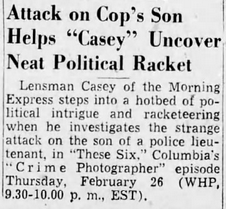 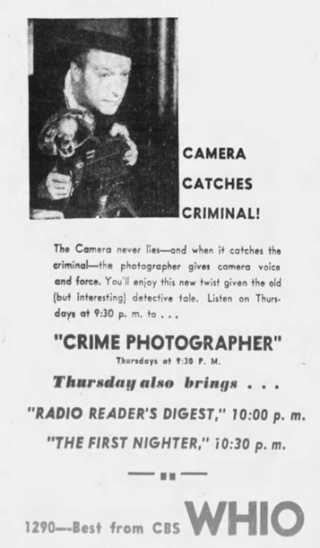