Blind Justice is the last of the Anchor-Hocking series. All that's announced at the end is that there will be a new sponsor next week. This is the last time we will hear Tony Marvin as the announcer for the series. This is a good episode that relies on Casey's relationships in the criminal side of life for a satisfactory solution to the crime that is definitely illegal. It's "blind justice" because justice is delivered but could not bear to see how it all happened.

Milt Havens, a shrewd but generally disliked criminal lawyer who has acquired a reputation as a double-crosser shows Capt. Logan and Casey an annonymous letter that threatens his life. Later Haven's wealthy wife, Doris, an ardent social welfare worker who is as greatly respected as her husband is detested, is shot to death by a gunman whose purpose, it appears, was to kill Havens. Havens, in turn, kills the gunman. And the latter is identified as the writer of the threatening letter. Casey is a witness to the double killing and, although the evidence seems conclusive that Mrs. Havens died as the result of a shot intended for her husband while Havens staunchly attempted to defend her, the photographer becomes stubbornly convinced that Havens planned and brought about her murder. To secure proof of his theory seems hopeless. Apparently the perfect crime has, at last, been committed and Casey becomes bitterly convinced that Justice is truly blind. But forces that his investigation put in motion suddenly gather speed and unanticipated direction. The shrewd attorney who cheated the law finds himself face to face with a grim Justice whose eyes are very keen and whose grasp can't be denied.


The show opens with Casey and Logan playing gin rummy, and Casey about to lose. "Figure up what I owe you, Canfield..." is what Casey says. Canfield was a famous gambler who helped create the concept of "resort casino." https://en.wikipedia.org/wiki/Richard_Albert_Canfield  He died in 1914.

9:55 Mrs. Havens is shot -- this is the kind of chaos that would have made the crime in Fog more believable.

10:40 The dying killer tries to mutter something to Casey and fails, but his lips seemed to form the words "double-cross." Casey

12:55 Ethelbert is talking to Grace on the phone, saying he'll look for something. We have no clue what it is that they're talking about.

The actor who plays "Fats Everett" played Sergeant Pinelli in Tough Guy a few episodes ago. When collectors listen to episodes in rapid succession over a short time, we notice things like this. For listeners who tuned in once a week, they tended not to catch on to such things.

Fats helps Casey figure out that Milt Havens staged the attempt on his life that was actually designed to murder his wife and get her fortune.

20:28 Cotsworth stumbles slightly on a line, and handles it so naturally, it seems like natural speech.

21:48 Fats visits the group at the Blue Note. 22:10 He invites Casey and Ann to his new restaurant. At 21:15 the actor nearly flubs Ann's last name. They decide to go when he implies it will be worth their while in terms of solving the case. It turns out that the mayor has reserved a table and there might be a story. Fats asks Casey what time it is, and he says they are the same. Why would Fats do that? Shortly after, Milt Havens is walking out of the restaurant.

24:10 There's machine gun fire (bad sound effect) and a car speeding away. Before Casey can snap a picture of the getaway car, Fats bumps him so he can't snap a photo, and the car gets away, but Havens is dead. Casey realizes that the mayor being at the restaurant might have been just a ruse to get him to the restaurant to see the shooting of Havens.

26:15 In the Blue Note epilogue, Casey suspects that Fats arranged or assisted in the hit of Havens, but there is nothing he can do about it, and nothing that he wants to do about it. And it did turn out that the mayor was there, as Fats promised.

Tony Marvin's tenure with Casey is over, but his career as an announcer would continue in many assignments, the longest term being with Arthur Godfrey. Future announcers for Casey will be Bill Cullen for the Toni series who became better known form hosting 1950s and 1960s game shows and Ken Roberts for the Philip Morris series, who is known to OTR fans for his work as an announcer for The Shadow (and being father of actor Tony Roberts, a favorite of Woody Allen; Ken Roberts makes an appearance in Allen's Radio Days at the end of the movie in the rooftop scene). Bob Hite would handle the revival series of the mid-1950s.

Bernard Lenrow (Logan) still receives no credit in the program. It might have been nice to have the whole cast mentioned at the end of the A-H series. 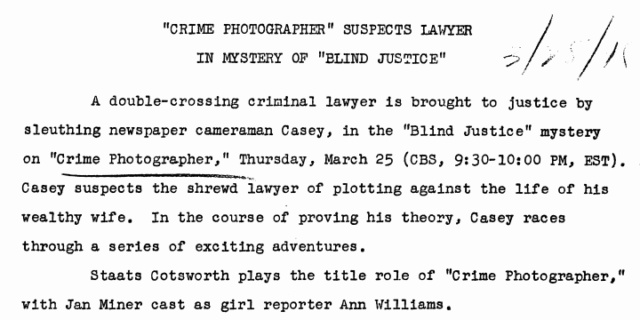