Unlucky Numbers is a better than average episode, written by Gail & Harry Ingram. The Ingrams were highly capable writers, and their work indicates great familiarity with the details of the Casey program and its often lighthearted moments. Harry wrote Scene of the Crime, one of the more entertaining episodes for its focus on Ethelbert as a wannabe detective. The Ingrams seem well-versed in Casey background and continuity, and may be more entertaining than some of Cole's work.

Their collaboration for this episode is an interesting one. The core of the program is Gail's script for The Big Story of 1948-07-21 about "lottery rackets" in Atlanta as uncovered by reporter Keeler McCartney. Harry adapted the script to the characters of Casey resulting in this episode. Both Gail and Harry each contributed scripts to The Big Story radio series, and Gail also composed scripts for The Big Story television series. It is fascinating to have Gail's original script in front of you as you listen to this Casey episode. The script is at https://app.box.com/s/ogqz6zddmr2v0y88i54n15jjm538y301 and is available to the public because scripts of radio programs that were sponsored by cigarette companies became part of the tobacco litigation of the last decades of the 20th century and were made available online for attorneys and the public. (many thanks to Cobalt Club member mjnunes84 for the research tip; The Big Story episode can be heard at YouTube.)

Casey and Ann are set out to get some info. on "the numbers racket".  They interview the mother or one or the youngsters who has fallen victim to the lure or the numbers game. Mrs. Polachek tells how her son Steve cannot resist trying his luck each week, using his hard-earned money and even going so far as to use the family savings when his own gives out... She is bitter about the whole things and begs Casey to put a stop to it. Casey does some sleuthing and meets up with the head of the numbers racket and with the help or Mrs. Polachek and her son, puts an end to this worthless racket.


0:42 Ethelbert believes that Gladys wants to marry him, because she said so. He says if he doesn't ask her, she'll be mad. And if he does ask her, she'll say yes. He believes neither result is satisfactory. Casey says he needs to be firm, and not let a woman gain the upper hand... and as he rants, Ethelbert tries to get his attention that Ann has walked in and has been hearing all this.

Ann tells Casey that Burke has an assignment about the numbers racket. Casey sees no problem with the numbers games, so thinks it's a "silly" assignment. Elsewhere in the US, these games may have been referred to as lottery games. Both usually were done in bars as the owners looked the other way or may have gotten an under-the-table cut of the take. If there were problems, they would say they were not aware that such things were happening in their establishment.

2:06 Ethelbert says if they want to know about the numbers, they should ask Steve Polachek, a young patron of the Blue Note, since he plays the games. Ethelbert gives his address as 22 Ward Street.

7:55 Casey is going undercover to find out who is behind the games. He's going to pretend to be a numbers runner at Al's Pool Hall. Logan warns him that it's dangerous.

Casey meets "Whitey" who really wants to be one of the tough guys but is not smart enough to be one, and leaks confidential information to Casey constantly. Casey's using the name "Duke." Whitey says the mob is concerned about the stories about numbers that are being written in the Morning Express, and that Casey and Williams may have to be dealt with.

11:43 Inadvertently, one of the local cops recognizes Casey and tries to start a friendly conversation with him in front of Whitey. Casey's cover is blown... but he gets away by pretending he has a gun in his suit jacket pocket.

13:50 Matheson, the gang leader, arranges to ambush Casey at the house with the "silver door" where they killed a cop who was investigating the racket two years ago.

14:45 Whitey approaches Steve in the street to play the game again. Whitey is behind in his receipts and he knows Steve is an easy target, and he gives in for "the last time." Steve is told that the "guys at the silver door" are going to take care of Casey.

16:35 Casey gets a call that is a ruse to get him to the trap. 18:00 Mrs. Polachek meets them to tell them that Steve told her it was a trap and they shouldn't go. 19:00 They realize they are at the house with the silver door, but they can't start the car to go away -- some wires were pulled.

They force Casey to drive to the place where they will kill him. But Casey starts to drive recklessly 21:00 at high speed to put everyone in the car in danger. He runs a red light and a police siren can be heard in the distance. The car crashes in a loud collection of skid and inadequate collision sound effects. The next scene is at the Blue Note.

21:44 Ethelbert asks Casey if he wants another pillow behind his back, which he refuses, though it is clear he is in pain (What's a bar doing with pillows?). The he says "Miss Williams, another pillow under your..." is a fill-in-the-blank much of the audience must have chuckled about.

Matheson was arrested for a long list of crimes, including the Sullivan Act. The law restricted the use of guns in New York, another indication of the locale of the series. https://en.wikipedia.org/wiki/Sullivan_Act  Some people at the time imprecisely used the phrase as a generic name for gun laws in general.

Casey admits to driving through eight red lights in the adventurous driving incident; he still may be charged with reckless driving.

22:30 Steve and Mrs. Polachek visit the Blue Note to thank Casey and Ann for their work and that Steve is no longer playing the numbers. They can now save their money for the farm they wanted and more.

The AFRS closing, after some music, is "Tonight's adventure was written by Alonzo Deen Cole. Staat [sic] Cotsworth played the part of Casey, Jan Miner was Ann, and John Gibson was Ethelbert. Next week, another adventure of Casey, Crime Photographer! This is the United States Armed Forces Radio Service, the voice of information and education."

The Polacheks live at 22 Ward Street. There is a home at 22 Ward Street in Norwalk, Connecticut, the town where the Ingrams lived. There is no indication any connection to the Ingrams that I can find at this time. Many writers of the time inserted real addresses to entertain themselves and others they knew. One of the best at it was Jack Johnstone, who used his home address and those of acquaintances in his writing of Johnny Dollar.


There are no relevant newspaper clippings for this episode.

This chart shows some of the changes Harry made to the script: 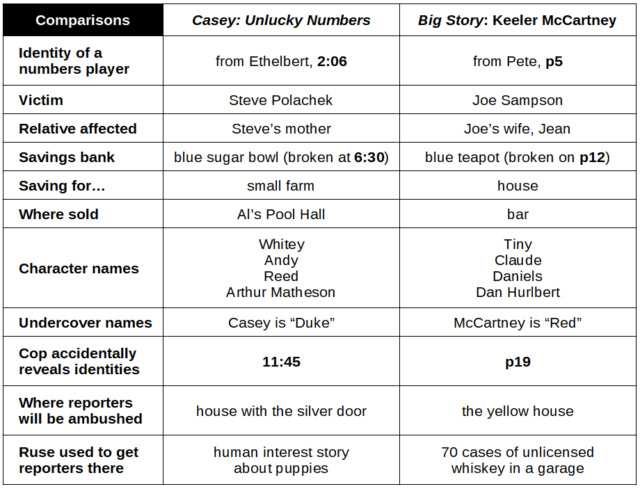 The ending is much different and is newly written. The epilogue at the Blue Note has some similarities to the Big Story script.

Gail and Harry Ingram were successful writers and directors of many programs such as Tales of Fatima, The Big Story, The Shadow, Inner Sanctum, and submitted scripts for other series such as Casey, Crime Photographer.

Pictures of Gail and Harry Ingram can be found at Getty Images
https://www.gettyimages.com/photos/gail-harry-ingram?mediatype=photography&phrase=gail%20harry%20ingram&sort=mostpopular 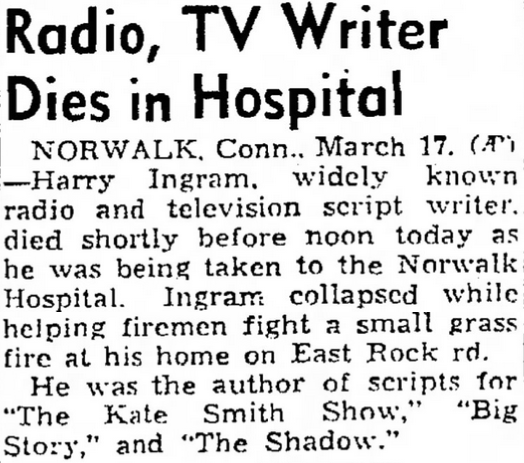 Gail Ingram continued her career long after Harry's death. This blogpost has some excellent background about her.
https://classictvhistory.wordpress.com/2007/12/21/in-memoriam-gail-ingram-1924-2007/

Harry's script, Blackout, became a photostory in the Summer 1949 edition of Radio Album. The name was changed to Finger of Suspicion. Here is the first page... 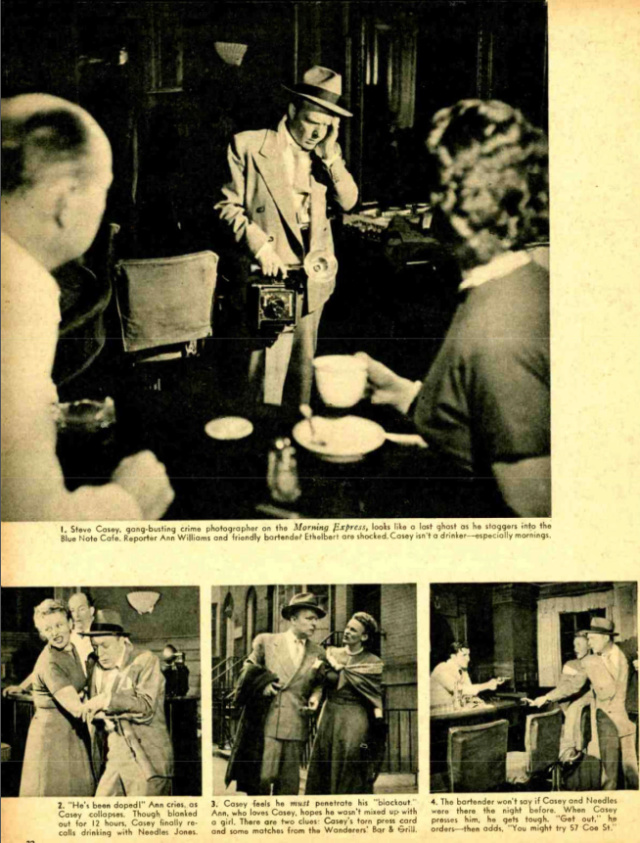 Strangely, they give Casey the first name of "Steve" in the article! His name was "Jack" in the pulps. Based on the recordings we have, his first name was never used, but it did appear in some newspaper clippings. Perhaps the writer or editor of the piece was thinking of "Steve Wilson," lead character of the Big Town series?

These photoplays can be great fun to view. Even the gangsters are in suits and ties! These give you a chance to see the stars of the programs. The pictures are so staged and stilted, for the most part, that they have an innocence to them and give the reader a chuckle. Cotsworth can really ham it up for some of the photos, and those are great, too.

Download the full photoplay article as a PDF
https://my.pcloud.com/publink/show?code=XZ6GoMkZvP1cuz3WBKSa0muAGQ7pi5p8bBWX

The series celebrated its eighth anniversary in July 1950. Below is the anniversary press release from CBS. The series would end four months later, when Philip Morris let its contract expire. 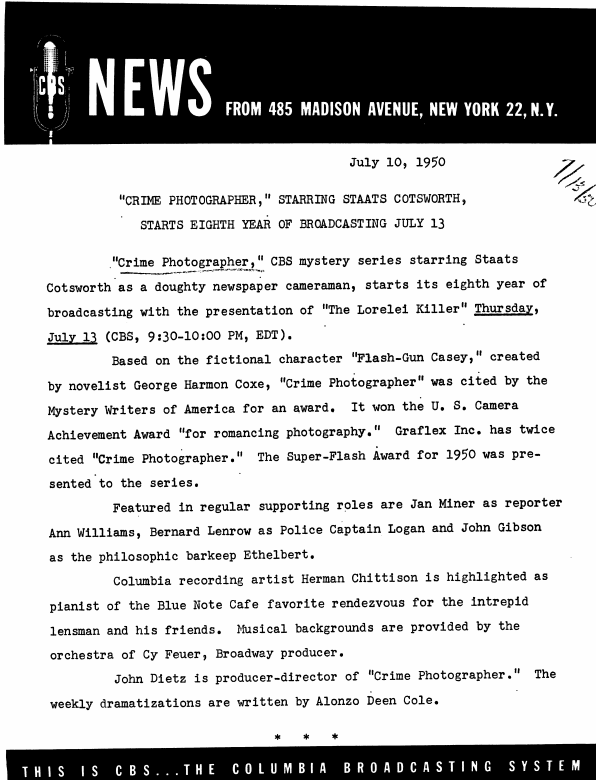