Scene of the Crime is the best of the scripts from the Toni era. It includes a bigger and funnier role for Ethelbert that doesn't disappoint. Ethelbert is considering his future career and he decides to take a correspondence course in detection. In the past, Ethelbert admitted his lack of prowess in academic matters, never having been past McGuffy's Fourth Reader, so this is a big step for him. Logan and Casey are stupefied when Ethelbert's involvement works for the better as he buffoons his way into insights into the case and identifies the murderer! It's a good program that is a nice diversion from the regular style of the series.

An interesting aspect of this broadcast is that it is not by Cole, but by Harry Ingram, credited at the conclusion of the broadcast (28:07). The ADC continuity notes identify it as a Cole script, likely a mistake of habitually typing his name over and over again in the document. If it wasn't Ingram, a mistake like that would have been caught in rehearsals. He was a writer for The Big Story, The Shadow, Kate Smith, and other programs, including the TV version of Tales of Tomorrow. He died in 1952, only 40 years old. Ingram captures the essence of Ethelbert very well and delivers some funny moments throughout the script.
https://www.imdb.com/name/nm2664087
http://www.radiogoldindex.com/cgi-local/p4.cgi?ArtistName=Ingram,%20Harry&ArtistNumber=20989

Casey's search for a murderer becomes a little confused when Ethelbert, the Blue Note's bartender, steps up to give him a helping hand in "Scene of the Crime." Having just completed a correspondence course in crime detection, Ethelbert begs to be allowed to join Casey when the police call him to photograph a murder scene - and perhaps identify the victim. Casey gives up, but "Sherlock" Ethelbert immediately recognizes the dead man as a former numbers racketeer. To trap the killer, Ethelbert returns to the scene of the crime later that night - just as he expects the murderer to do. The ensuing drama, confusion and violence which befalls the tyro detective in pursuit of his criminal nearly succeeds in ending both Ethelbert's and Casey's sleuthing careers.

2:09 Ethelbert's third course is about identifying corpses, so of course he goes to the crime scene... and then a Toni commercial interrupts...

4:18 Ethelbert takes over the crime scene by telling everyone to get out of the way... Logan is miffed, and even mutters that he doesn't really like having Ann at crime scenes.

5:58 Despite Ethelbert's systematic approach, he doesn't know whose corpse it is... but he suddenly recognizes him as a regular visitor to the bar, Dave Wilson. Later, we learn that Wilson is a numbers runner (7:48) for Mugs Benson.

6:45 Ethelbert says he has to stay on the case because Logan will use "employ archaic methods and proceed from false hypotenuse."

9:55 The line in the correspondence course that drives the episode is that "the criminal always returns to the scene of the crime" where they will find a "shadowy figure creepin' about in the moonlight searchin' for telltale clues to remove." So of course, that's where he and Ann go.

11:05 Ethelbert finds the "shadowy figure creepin' about in the moonlight searchin' for telltale clues to remove." Ann asks what they should do. He says "detain the fugitive until such time as such help can be... obtained as obtained." Ann wishes Casey was there. Ethelbert asks what Casey would do. Ann tells him he would sneak up from behind and slug him... so he does and knocks him out... and it turns out to be Casey! (12:09)

15:12 Logan uses the term "hawkshaw" to describe Casey. That's an obsolete term for "detective," and not always complimentary. Hawkshaw was a detective character in a late 1800s play that remained popular through the early 1900s and led to some motion pictures https://en.wikipedia.org/wiki/The_Ticket-of-Leave_Man_(play). The name was used in a humorous comic strip, Hawkshaw the Detective, that lasted through most of the 1940s.

18:15 We meet Buddy Wilson, younger brother of Dave. Buddy will turn out to be the murderer. 19:25 Ethelbert looks at Buddy's profile and he says 19:54 that Buddy's the murderer because Ethelbert studied Buddy's "contours." Casey and Ann don't believe it as she calls him "that blue-eyed blond-haired little cherub... he's got a baby's face." Ethelbert stole the cigarette box from the house because it will be "lousy" with Buddy's fingerprints. Today, "lousy" just means bad and its original meeting of being infested with lice is long past. Ethelbert's usage draws more from the "infested" meaning, unlike the way he used it when he said Casey was a lousy photographer earlier in the episode.

After Casey investigates and Buddy's background turns out to be spotless and all of the fingerprints on the cigarette box turn out to be Ethelbert's, the bartender is very discouraged.

22:35 Buddy Wilson comes to the bar. He wants the cigarette box back. Ethelbert could not open it because it had a trick locking mechanism. Ethelbert drops the box -- and there's money in it, $10,000 ($120,000 in 2020 US dollars). It's the money Buddy got for killing his brother. Now that Ethelbert knows, Buddy says he has to kill him, too.

24:20 Herman the pianist calls Casey (no dialogue, just Casey's side of the conversation) and tells him that Ethelbert left the bar with Buddy.

25:40 Casey and Logan go back to the spot where Dave Wilson's body was found (the original scene of the crime where all criminals return to, of course). Logan shoots Buddy from a distance before he had a chance to shoot Ethelbert. Ethelbert faints.

27:00 Back at the Blue Note, Ethelbert says he's not completing the detection course and has selected a course about wildflowers instead.

Correspondence courses were common at the time of this episode. Much of listening audience was familiar with the concept. Some courses were famous. A mail-delivered piano course turned out to be one of the seminal moments of the emerging direct mail industry. The late copywriter, John Caples, became a legend in advertising, still honored today, with his famous headline "They laughed when I sat down at the piano but when I started to play..." http://www.kenburnett.com/KB%20assets/Blog41ad.jpg
Correspondence courses were serious business starting in the late 1880s. The courses allowed returning WW2 veterans to re-establish their lives at work and with family, while advancing their education with support of the GI Bill. It has since become known as "distance learning." 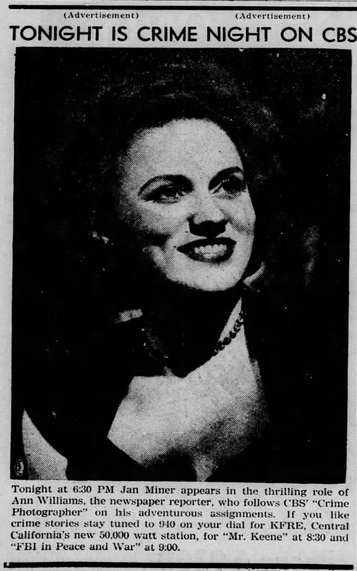 I had mentioned that Alonzo Deen Cole had some familiarity with guns and that he was arrested for a domestic issue related to his ownership. A month later, the charges were dismissed. The reporting makes light of the incident and Cole's involvement in crime program scripting. It is always interesting that it was common to print the actual addresses of persons in the news. Cole had since moved from his Mount Vernon apartment to a house in Scarsdale (in the town of Greenburgh), a few miles north away, and still convenient by train to Manhattan. 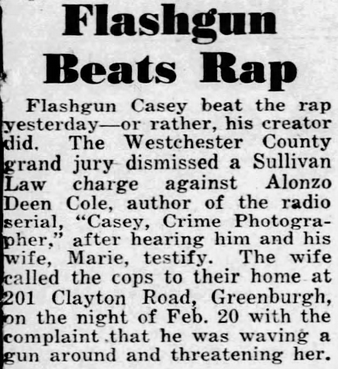 John Dietz was a long-time staff producer at CBS in New York. This backgrounder was released by CBS highlighting some of his accomplishments. 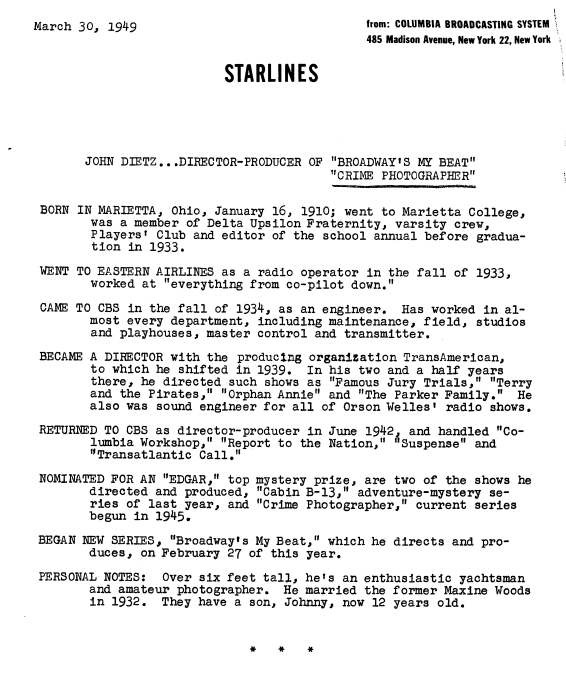