Earned Reward, a well-done Casey script and performance, was produced earlier in the series, on 1946-01-07. This appears to be a last minute substitution for a script titled "Hot Ice," a Cole script that was broadcast on 1944-01-15 as "Casey Compounds a Felony" and also on 1945-08-15 as "Hot Ice." The prior two weeks had scripts by Milton Kramer and Albert Barker, and the week before that was an adapted Witch's Tale script. It is assumed that Cole was away on vacation. For some reason, "Hot Ice" was replaced by this Earned Reward script from nearly two years before, during its unsponsored period. This means that a repeated script was used to replace a repeated script!

According to Siegel & Cox (p79), Earned Reward was the first of two scripts based on an original George Harmon Coxe story. It appeared under the same name in the March 1935 issue of Black Mask magazine. The other was Buried Evidence, broadcast in December 1946 (not in circulation) from the July 1935 issue.

Casey and Ann cover a fire and at it they find the body of Shorty, a cameraman on another paper, who has been shot. In his plate case is a shot of a hunted killer who had been supposed killed in the basement of the burning tenement. Shorty's widow gets the reward money after Logan and Casey capture the killer.


1:52 We get a sense of the fraternity that photographers have for each other, even if they work for other newspapers in town. Casey is generous to one of them, "Shorty," as part of the plotline. He owes Casey $100 ($1200 in 2020 dollars) for a loan he made to get through the expenses of his sick child. Casey refuses to take payment for $10 this week until Shorty's financial situation is better. Shorty works for the Globe, the same newspaper mentioned in The Camera Bug a few episodes ago.

4:08 We learn that one of the brothers of some local criminals, the Mosely brothers, was a former crime photographer for a now defunct local newspaper. Tony Mosely is just out of prison for blackmailing some of the subjects of his crime photos, but according to Casey seems to be "keeping his nose clean."

4:46 We learn of Shorty's predicament, according to what another Globe employee told Ethelbert. Shorty had to take money out of his life insurance to cover debts incurred from caring for his sick child. Cole (and Coxe) sets up circumstances for the upcoming tragedy of Shorty's murder that will inspire Casey to solving the case.

Ethelbert saw Shorty trying to pay Casey back, and Casey covers up his generosity by saying it was for a tip on a horse. Ethelbert says (5:13) "The tips you give out on horses don't call for gratitude, they call for revenge." This gets a chuckle from the studio audience.

5:25 Casey makes reference to the prior week's episode saying he'd like the sandwich he just had on his Blue Note tab because he has no money left from going out on the town last week. He sarcastically calls Ethelbert "Angel Face," the name of the failed play from that episode. This was one of the edits Cole made to this re-used script to bring its continuity in line with the new scripts, and to reward regular listeners for their loyalty in keeping up with the thread that links the episodes.

5:34 Ann comes in and gets Casey to cover a tenement fire on East Farley Street... Casey realizes that's where Shorty was going and Shorty will get the scoop! Crime photography is a close fraternity of very competitive professionals.

8:04 Ann stumbles on Shorty's body! Casey fears Shorty's been shot; someone slugs Casey and knocks him out.

14:07 They realize the picture is of Joe Mosely, and that the tenement victim was a body of the same size as Joe, and Mosely's dental bridgework was planted in the body.

16:15 Casey makes a demand that he wants the reward for finding Mosely, $5,000 ($60,000 in 2020 value) and doesn't want to split it with anyone. Logan objects and questions Casey's motives. We know Casey will give it to Shorty's family, but he keeps that secret from Logan and Ann, and Logan questions what seems to be Casey's greedy motive. Ann is upset, too. This is the second time that Casey keeps charity private from others, the first was to Ethelbert.

21:46 Casey intrudes on the meeting with Frank Mosely (the brother who became a lawyer). The Moselys had realized they took Casey's photo case and not Shorty's. One of the thugs forces Ann into the room.

24:00 Casey gets beaten up trying to protect Ann... Logan and his crew barge in on the scene just in time. This is one of the better executed scuffles from a sound effects perspective. Logan says he secretly followed Casey to the scene to get the reward... but admits he knew Casey's plan for the reward money all along. Logan was more upset that Casey was not open and honest about it from the beginning.

26:50 The Blue Note epilogue is just Ann and Logan. Casey is home recovering from his exploits... supposedly... but walks in to the Blue Note with the cops assigned to keep him there... but Casey told them the address of the Blue Note was his home! (Gets a chuckle from the audience). 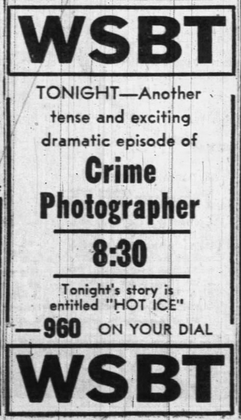 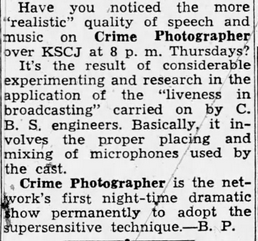