Key Witness is a good episode which has elements of Gentle Strangler (Casey alone in his apartment confronting a killer) and Laughing Killer (a gun that Casey has selected and loaded to cause it to blow up when triggered). The episode has some good dialogue related to the relationship of Casey and Ann. It also has the very improbable act of the police lending Casey a rifle to protect himself.

Casey and Ann stop at a roadhouse, after having completed an out-of-town assignment. While pulling into the parking lot, the pair notice that a man, apparently helplessly drunk, is being carried into his car by two friends. Casey and Ann proceed inside and on their way to the door, Casey spots a key lying on the ground, and identifies it from the disc to which it is attached, as one belonging to room 1118 in the Harwell Hotel. Inside, under the bright bar room lights, he discovers that the key is bloodstained. But the bartender has also seen it and has watched Casey examining the key, with the uncomfortable result that in moment, the bartender has informed the roadhouse owner. Casey and Ann find themselves staring into a gun held by "Shark" Yardley, proprietor of the establishment. The presence of Yardley, a notorious racketeer, suspected of several vicious killings, leads Casey to believe that the "drunk" he saw carried into the car in the parking lot, was a dead man and the one to whom the key belonged... He and Ann become important witnesses to the aftermath of a murder. They effect an escape from Yardley and his gunmen, knowing that their lives are imperiled because they will seek to testify against Yardley who faces convictions of first degree murder. In the ensuing climax Casey and Ann undergo an ordeal that brings "Key Witness" to an exciting close.


Casey and Ann pick up a bloodstained key in the parking lot of a roadhouse owned by a racketeer. The body of another racketeer who has been cutting in on the territory of the first one is found in another part of the city and the key is the only evidence that he has been to the roadhouse. Several attempts are made on the lives of Casey and Ann and the killer is trapped in Casey's apartment.


"Key Witness" is one of those interesting titles that provides multiple plays on words beyond the obvious. The first is easy, as Casey is an essential ("key") witness to the coverup of a murder (as is Ann). The second is the key, a necessary bit of evidence that itself testifies to the murder. The key is, in a broad sense, a witness to the event, because of the blood on it. Third, the bartender of the restaurant inadvertently attests that he knows about the key, hence, he is a witness concerning the key.

1:30 Tony Marvin enunciates "key" with great and defined emphasis as a hint of the various contexts of the title.

2:55 Ann remembers that the restaurant they are about to walk into is "Shark" Yardley's place.

3:29 Two men are moving a body. Ann and Casey assume it's a drunken patron. We learn later that they're moving a murder victim.

5:05 Ann notices blood on his hand... and he notices the key is covered with blood. The tough guy bartender says he'll take the key... Casey asks how he knew he didn't get the key from somewhere else. Yardley comes out and the discussion about the key begins. 7:38 Yardley says it is important that cafe guests see him that evening, obviously for the sake of an alibi. 8:42 Casey pretends he's nervous, almost like he's an alcoholic, and begs for a shot... which is a ploy to help him and Ann to escape.

10:15 Ethelbert seems upset that Casey wasted good 100-proof whiskey in the eyes of the tough guy.

10:37 The dead man's body was found in a ditch. It was Chuck Trumbull, a gangster trying to get into Yardley's territory. Trumbull lived at the Harwell in room 1118. An essential point for the story: Trumbull was killed with his own knife.

13:10 Some playful dialogue between Casey and Ann begins. After being absent from the scripts for a few weeks, Cole seems to be playing it up more. Casey says he's going to ask the police for a guard on Ann, and that he won't need one since he can take care of himself. Ann resists, and he justifies it by saying "women are different." Ann responds, cynically, "I wasn't sure you were aware of that." Casey was surprised at her tone and asks "are you getting one of your humors again?" (That kind of response would not be acceptable today; "humors" is not used often in today's language and refers to a temporary mood or mental disposition.)  Ann says "it's a woman's privilege to have humors." She's tired of being treated in the same way that Casey treats Logan and Ethelbert and others. Casey goes back to his desire for her to have police protection, that he does not want to lose a "pal." Ann hates the word, and she will make Casey jealous in the epilogue by going out on a date with her police guard.

14:10 Finally, some appropriate car sound effects as Yardley attempts to run Casey and Ann off the road.

17:55 Brad, the cop protecting Casey tells him not to start his car. It's obvious because of the lack of snow on the car hood that someone had opened it. Upon inspection, there was some TNT rigged to explode when the car started.

18:30 Audience coughing noted. It's not so inappropriate as the scene takes place outside. But there's another cough at 18:45 when the scene turns inside.

18:45 Logan details what's happened since the confrontation at Yardley's restaurant. Casey's been shot at, and there was an attempted knifing. Ann received poisoned candy.

19:25 Casey figures that to find Yardley, that have to create an opportunity for him to enter Casey's apartment. It's obviously that Yardley has someone watching Casey, so it's arranged that his protection sneak out to a bar at specified hours so Yardley will be drawn to the apartment. In Gentle Strangler, Casey had in-apartment police protection and an imposter disabled the cop and entered Casey's home in an attempt to kill him. In this episode, the killer's visit is expected.

20:30 Logan wants to give Casey a gun to protect himself. This would never happen in today's police procedures, and it may have been a stretch to happen back in 1948. At 20:51 the audience chuckles at the kind of big rifle Casey wants. Cole will re-use another of his prior story elements.

22:40 Yardley is in the apartment. After some chatter that includes stating he has a gun, Yardley says he prefers to do his killing with the victim's weapon, which is exactly what Casey wants. The purposeful rigging of a firearm to explode back onto the shooter was used in Laughing Killer.

25:45 At the Blue Note epilogue, we learn that Yardley survives the rifle explosion. In Laughing Killer, the would-be shooter was not killed, either.

26:25 Ann has a date with the cop who protected her when she was in danger of being attacked by Yardley. She makes a point of saying he was "good looking" and then calling Casey "pal" and emphasizing it. There is a good chuckle from the audience during the dialogue. She obviously expects a different relationship with Casey and end to being taken for granted. When she heads out on her own, it's clear he's jealous.

27:30 The audience starts its enthusiastic response much earlier than usual. Perhaps a wrong applause cue was given?

Cole was familiar with guns... he was arrested for a gun violation in 1949 after he was swinging the gun around at home in a domestic argument. The news clippings will be included in an upcoming post.

Where Cole gets the names of the characters is always an interesting speculation. Writers are always trying to figure out unique names and attempting to avoid using the names of known persons. Martin Grams told me that the WXYZ folks had a process that created names on a random basis so as to prove writers had no intent to profile a particular person. Cole just picked names he thought were interesting. "Shark" may have been selected because of high profile news stories about loan sharks in January 1948. The saddest story that had nationwide coverage was of a young mother in Alabama who killed her infant to get $1,000 from an insurance policy to pay a loan shark. "Trumbull" is a town in Connecticut that Cole would have known. 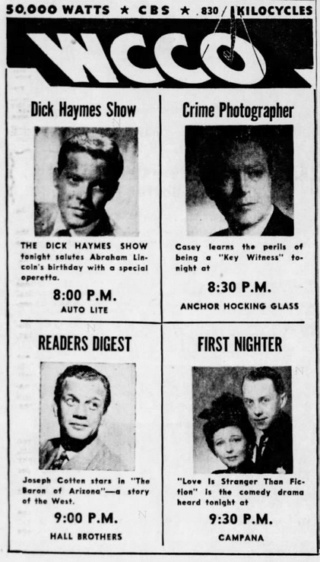 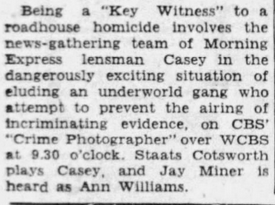