Toni Takes Over the Sponsorship of Crime Photographer

It seemed early for a renewal, but at the beginning of the year, CBS renewed Casey despite not having a sponsorship renewal from Anchor-Hocking. The company was happy with the ratings for Casey but they were not pleased with how much money they were paying for the show. It was not delivering the uptick in sales that they wanted, especially compared to what they were paying for Hobby Lobby, the program they stopped sponsoring to do Casey. CBS on the other hand, knew that Casey could draw ratings, so having it as a sustainer was a good idea... but their renewal was also a sign to prospective advertisers that CBS believed in the show, and a new sponsor would be getting access to an established and successful property with a large audience.

CBS was prepared to run Casey as a sustaining program just like it was before Anchor-Hocking. That would likely mean a cut in budgets for production factors. The A-H series was lush compared to what the program was like before then. And it seems pretty clear that Cole made some extra efforts for the scripts, too, so that money was being spread around quite a bit to everyone involved. Most of the crime shows were  sponsored by products considered as male-focused. The A-H sponsorship always seemed a bit odd, and the idea that Toni, for home permanents, would sponsor a crime show really seems odder than the A-H choice. If A-H was unhappy with what became a full-family targeted crime show, how would Toni get a different result that they would be happy with? 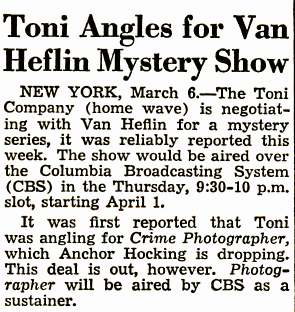 Note the name in this clip: Don Nathanson. He was an ad executive who wrote one of the Suspense "one hit wonders," A Guy Gets Lonely. He would later become a top investor and executive in broadcast and cable industries. Toni must have been making incredible amounts of money for them to spend over $40 million in 2020 US dollars on broadcast advertising. 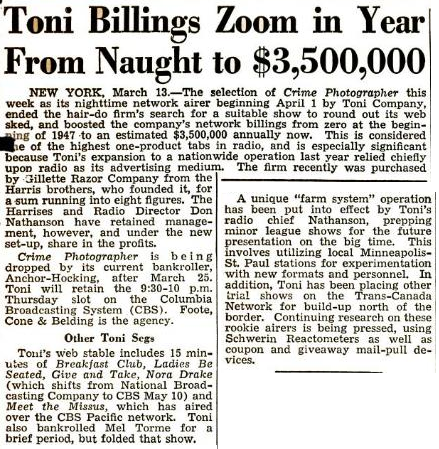 The Van Heflin series idea was still around, and it would have kicked a sustaining version of Casey to a less attractive time slot. This newspaper clip says Toni rejected the Casey series. 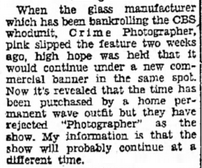 For whatever reason, perhaps just a negotiating ploy, Toni decided to run with Casey and keep its premium time slot. 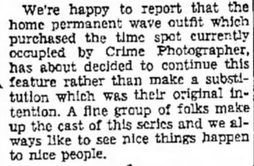 The press release announcing the new Toni sponsorship was mailed the day after the final A-H broadcast. 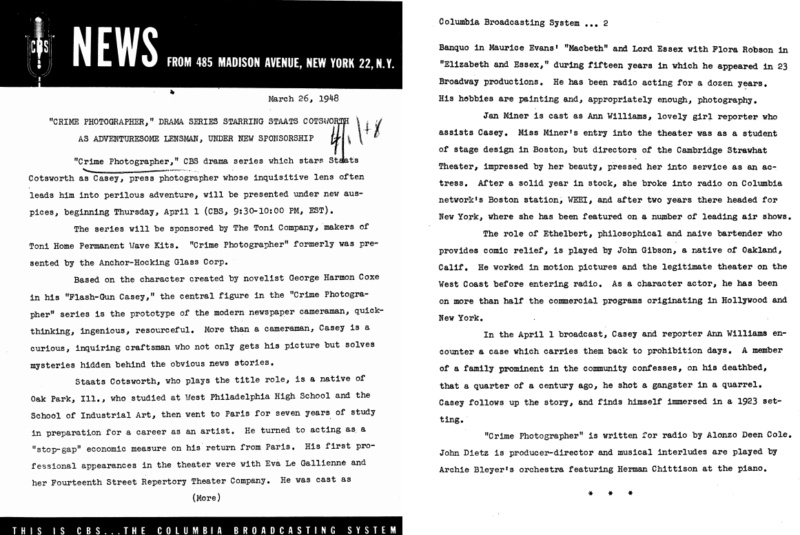 Someone liked Casey in Hollywood. Despite the sponsorship problems, they paid for the rights to make a movie. It never happened. 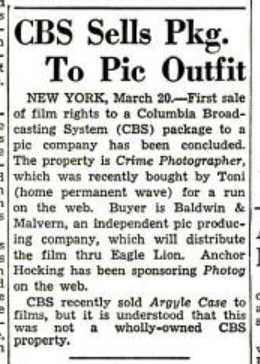 The first episode did not get much promotion. Note how this newspaper information is generic... and Ann is described as "luscious"!
1948-04-01 Mason City IA Globe-Gazette

Sam Chase, the curmudgeonly reviewer at Billboard, did not like the first episode. The line in his review that sums it all up is "It was all rather futile." Casey under Toni lightened up the scripts and the commercials were rather awful. The episode was Sleeping Dogs Awake and was scripted by Cole. 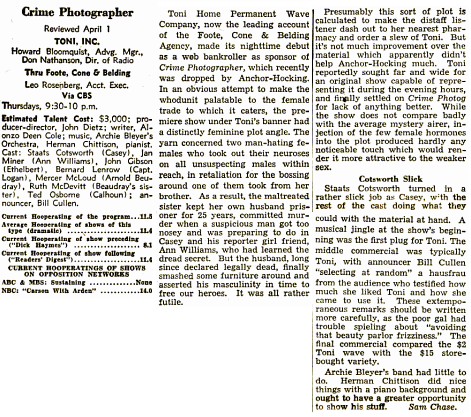 Toni wanted to advertise on TV, but they had no money left. That would come later. TV was still not available around the country, just in some major metropolitan areas, and few families had sets. 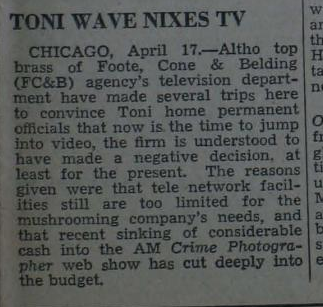 The entire Toni fiasco ran ~70 weeks, about 16 months, before they wised up. Then Casey got a more appropriate sponsor, Philip Morris, which cancelled its sponsorship of Philip Morris Playhouse in favor of the less expensive Casey. Interestingly, that final year of PMP was produced by William Spier, who made PMP much like Suspense, including the use of some Suspense scripts. Once Philip Morris took over, the scripts returned to the usual excitement, but the big budgets for production were already leaving radio. It all just made one long for that special time when A-H's sponsorship turned Casey into a blockbuster hit.

There are only five episodes from the Toni series. The first one that survives is eight months after the new sponsorship. One of them, Scene of the Crime is one of my favorites because Ethelbert has a big role. These are the five episodes:
48-11-25 Holiday
49-01-20 Action Photograph
49-03-10 The Scene of the Crime
49-05-05 The Wolverine
49-05-19 Cupid Is a Killer 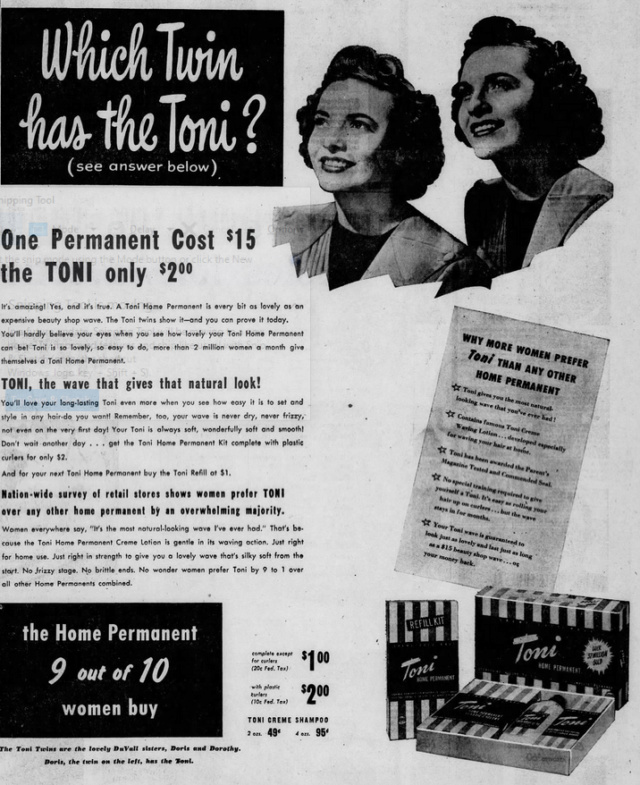