Snowball is a good program despite some really bad acting in an early scene and what seems to be an obvious plot hole. Ignore the bad acting. A little history of automobile technology, something most everyone about cars takes for granted, makes it clear there is no plot hole. It's a reminder that this is old time radio, and though these stories so often transcend their eras, they are still products of their time. The story is one that might never have been broadcast if Toni was still a sponsor. A faked murder-suicide staged by a woman? The idea could make someone's hair curl... without Toni!

The remainder of the Philip Morris episodes are AFRS recordings. They do not have any performance credits; the network recording ends at the end of the Blue Note epilogue, and then immediately cuts to the AFRS identification.

A murdered woman is found in the back seat of a car driven by an inebriated character who swears he never saw her before. The woman is identified and Casey sets out to question her husband - but finds him dead too, with a suicide note beside the body. It looks like an open and shut case of murder and then suicide born out of an insanely jealous husband's wrath. Neighbors are quick to tell that the dead man was insanely jealous of his beautiful wife who had attracted the attention of her husband's employer, a very handsome and suave ladies man. However, this theory is thrown to the wind when, a short time later, another dead woman is found in the same vicinity as the first. Investigation reveals that jealousy was the motive - but circumstances prove that it was not the husband's jealousy that brought about the triple tragedy - but by another, who, oddly enough, was believed to be out of the country at the time of the catastrophe.


1:49 The drunk's lines "I never saw that woman before" is delivered by the actor so badly, twice. It would be funny if it wasn't so grating.

2:45 George P. Rasko pleads his case to Logan... he says he was drunk and got into a car that looked exactly like his. It's a mystery how he got the car to run without his keys. It's not... keys were only needed to lock and unlock cars. The car he mistakenly got into was obviously left unlocked. It was not until Chrysler introduced key ignitions in 1949 that you needed a key to start a car. https://en.wikipedia.org/wiki/Car_key 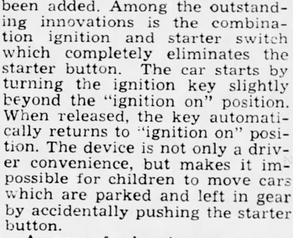 7:07 They realize the suicide is of James R. Royce, owner of the car that looked like Rosko's, and husband of the strangled woman in the car.

Cole lays some groundwork for the solution to the crime by emphasizing how attractive Mrs. Royce is and how women were jealous of her looks and concerned about her catching the glances of their husbands.

11:12 Casey, Ann, and Logan visit Carlton Judd, Royce's boss. He was expecting Royce, but he never came. Judd's wife went to California, and the servants the Judds had in the house were all off for the night. Royce had a key to the apartment. Judd says he was out at a movie Lost Boundaries at the Empire Theater. It was a real movie https://www.imdb.com/title/tt0041600 and was a highly regarded (Cannes award) film about race relations. https://en.wikipedia.org/wiki/Lost_Boundaries  For what seems to be an unprovoked reason, Casey asks if the apartments are soundproof, and Judd says no. Cole obviously plants that in the story because has a plan to use that as a factor in the conclusion.

15:30 Ann takes a call at the Blue Note that a woman's body has been found at the same apartment building. The medical examiner at the scene says the woman, a servant, was dead prior to being thrown from a top floor apartment.

17:25 Now we know the reason for the title. Casey explains how the first murder kept growing and growing like a snowball going down a hill into another murder involving other people in the building.

18:35 Casey starts figuring out the case... while confronting Judd. Mrs. Royce was killed in Judd's apartment and her body brought down to the car parked in the street, but it was the wrong car. It had to be arranged to make it look like Royce killed his own wife, and then committed suicide.

20:50 Judd confesses... Casey doesn't accept it... Judd's wife is not in California. She's been hiding in the apartment next door. This is why Cole planted the "thin walls" that she could hear her husband confess to the crime. Her trip was faked so she could spy on her husband to see if he was cheating on her with Mrs. Royce.

This script is unlikely to have been accepted by the Toni management and their ad agency as the three-time murderer of this episode is a woman. It's an indication of how the show changed under Philip Morris.

The AFRS identification is "This is the United States Armed Forces Radio Service, the voice of information and education." Sometimes the identification is useful for identifying which repeated Casey broadcasts are from which years.

These are interesting items about the show that appeared in newspapers around this time. 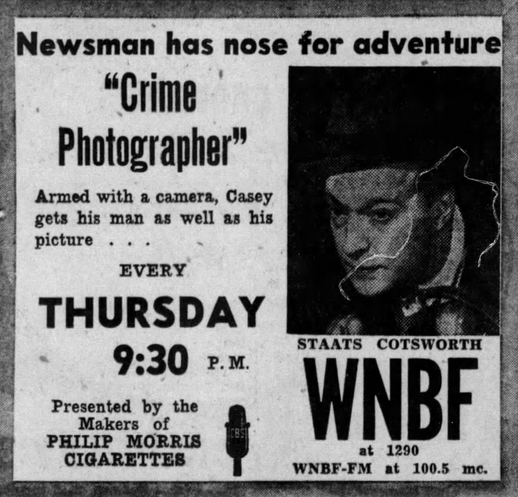 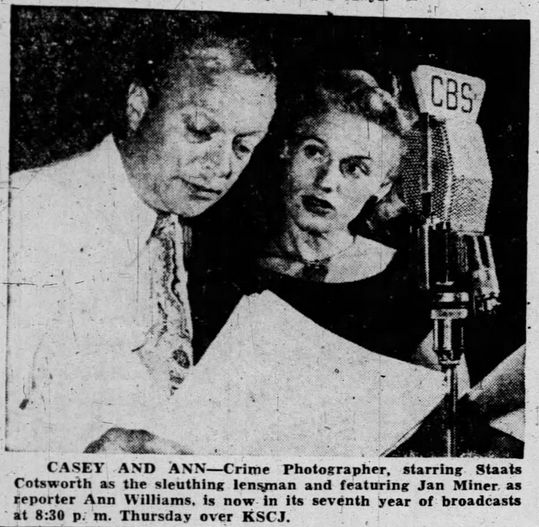