Thunderbolt ranks down at the bottom of Casey episodes, along with Great Grandfather's Rent Receipt and Action Photograph. There are elements of 1947-04-24 The Gentle Strangler that are re-used in the story. The plot and the dialogue are lifeless and the mad man who thinks he's Thor is silly and unconvincing. It's disappointing that this episode even made it to the air.

Dr. Foley, prominent brain surgeon, is found murdered - killed with a small tack hammer. His body is found on a dark street - after a thunderstorm - stretched out under a streetlamp. The previous week, Eli Whitlock, famous playwright, was found dead - under similar circumstances. A third murder is committed - under the same conditions and again, as in the two previous instances, the victim was a prominent, successful member of the community. A letter (the second of its kind) is received at City Desk, giving advance notice that another murder is about to be committed. The writer, who signs himself "Thunderbolt," promises another victim will meet his fate on the next rainy night. He describes his pretty certain intended victim and it's from the description, that be has Casey in mind. The next rainy night finds Casey on his way home - and sure enough he meets up with said murderer. After much struggling - and  some quick thinking on Casey's part, the killer is subdued and Casey has solved another crime.


This is somewhat like Gentle Strangler where people are accosted in the street and attacked. Some of the dialogue with Foley in the street is similar. The victim there was Whitcomb. The previous victim here was Whitlock. Cole is grabbing elements here and there.

2:12 The criminal (named Thorson) says that the thunder reminds him of Thor... get it? He's Thor's son.

A tack hammer was used in the killings. https://en.wikipedia.org/wiki/Upholstery_hammer

Whitlock's alleged killer had been arrested and put in jail. But he never admitted the killing, just going through the pockets of someone already dead. Now, this new killing appeared to exonerate the person jailed.

4:55 Burke appears again. He has a letter from Thor, "his thunderbolt will destroy others." He'll attack again in the next thunderstorm, implying that it will be a financier of some kind.

7:00 Ann and Burke make some fun of Casey for not really knowing the legend Thor.

9:12 Thorson meets Klammert in the street... the attack is not enacted, but the scene changes to Logan's office in the aftermath of the new killing, also with a tack hammer. Thorson is disabling street lights with a BB gun.

12:00 Burke visits Logan -- this is the first time in a surviving recording that Burke and Logan are in the same room! He has another letter from Thunderbolt: the next victim target will be Casey, though not mentioned by name, all of the characteristics fit him and no one else.

15:28 Ann pleads with Casey to drive home and not walk home, and to take other precautions. 16:00 Of course he doesn't listen, and asks the parking attendant to not tell Ann.

16:40 Thunderbolt walks up to Casey as he walks home. 17:10 He says he saw Casey at the police station when he was visiting Sergeant McCloskey. Cole used a similar name for a neighbor of a murder victim, McCluskey, in Murder in Black and White.

17:42 It clicks on Casey when he hears the name "Thorson" that he's with Thunderbolt.

18:35 McCloskey is walking in the street, too, and joins them... saying that Logan asked for extra protection for Casey. Carl Thorson excuses himself.

20:35 Casey is in his apartment and the phone is ringing. It's Ann checking up on him as planned, a few minutes late.

21:28 Logan calls and checks on Casey... Thorson has walked through Casey's unlocked door! "You can see I'm armed with a revolver." Just like Gentle Strangler, Casey is confronted with a killer in his very own apartment. Thorson says he will throw his hammer at Casey.

23:35 Casey calls Logan to come and collect the Thunderbolt killer. The dialogue is very similar to that of Gentle Strangler (starting at 24:10 of that episode) for the call, except this time Casey speaks directly to Logan. The ending of that story is a bit more complex where here it is abridged.

The AFRS announcement is "This is the United States Armed Forces Radio Service, the voice of information and education." No cast information is given.

There are no meaningful newspaper clippings for this episode. These are some other items of interest. 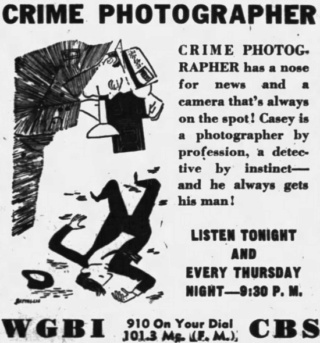