Queen of the Amazons is an episode designed to be amusing from the start. It's one of the lighter stories with a very simple plot. This is one of the more interesting casting decisions in the series, choosing 6'2" 230 lb. actress Hope Emerson as a former circus strongwoman, likely to make the performance more credible for the studio audience.

The story concerns a former circus strong women billed as "Myrina, Queen of the Amazons." She weighs nearly 300 pounds (none of it fat) - and in character, she is a likeable homebody - and very flirtatious. Casey becomes curious about an attempted robbery (which Queenie easily foiled by cracking the would-be burglars' heads together) - and about the strong woman's mouse-like boyfriend, Ambrose, who is engaged in a nearby chemical research laboratory that is engaged in highly secret governmental work. His curiosity threatens to involve him in the love-life of the massive Queenie and does involve him in a web of foreign intrigue and subversive influences that threatens his life and Ann's. In a dramatic and amusing sequence of fastmoving events - with the help of Queenie and the ever watchful F.B.I. - he manages to triumph over the threatening forces and to send a dangerous band of criminals to jail.

Fiance of ex-circus strong woman turns out to be Nazi spy who steals plans of war material from nearby plant and gives them to his girfriend in sealed envelopes shich he claims contain war bonds.

2:18 Ann tells Casey they have to head out to a farm near the Lindenhurst aircraft plant to cover an attempted burglary. This is another New York area reference. Lindenhurst is a village on Long Island. Republic Airport (now used for general aviation) is there, and is the location that Fairchild built WW2 fighters and other aircraft. Aircraft and heavy equipment manufacturer Grumman was nearby in the town of Bethpage, also building fighters and other aircraft. Grumman was known for its building of the lunar lander, almost 20 years after this show aired, and landing on the moon more than 21 years later.

9:10 Myrina describes what was and was not attempted to be taken from her storage trunk in the burglary, which raises Casey's suspicions that this was not what it seems. Ambrose Higginbottom comes into the scene and refuses to have his picture taken. That piques Casey's interest even more.

11:25 The local police sergeant says "notorious safecracker" Gus Newton was one of the people captured. The other was named Loder, wanted for espionage and illegal entry into the country. Ambrose had clearance for some top secret work at the factory.

14:40 Casey returns to visit Myrina to get more information and pictures. 15:30 Casey gives her chocolate and attempts some flirtatious conversation to find out what's in the trunk; it does not go well. They finally do talk about what's in the trunk, and that it's got mainly clothes from her old career, and savings bonds that Ambrose has been getting. They are planning to get married once Ambrose is divorced. Ambrose wanted the bonds the week prior, but she wanted to hold them. They're in sealed manila envelopes. Against her wishes, and before she could stop him, Casey opens one and finds they're not bonds, but plans for jet airplanes. Ambrose tricked Myrina to keeping them.

20:08 Ambrose walks in with a gun... and stops the conversation. The plot is revealed.

21:07 Myrina subdues Ambrose but other conspirators walk in and stop it all... strongwoman Myrina breaks the key to the trunk with her bare hands. Casey and Myrina are knocked out, and bound in the garage.

23:00 The trunk is opened and they find the plans. At 24:00 Casey and Myrina tricked them as they had freed themselves. They beat them up. The FBI breaks in after, surprised at Casey and Myrina's success. The FBI knew about the plot, and the agent provides more details about the extent of it.

Captain Logan (Bernard Lenrow) is not in this episode. 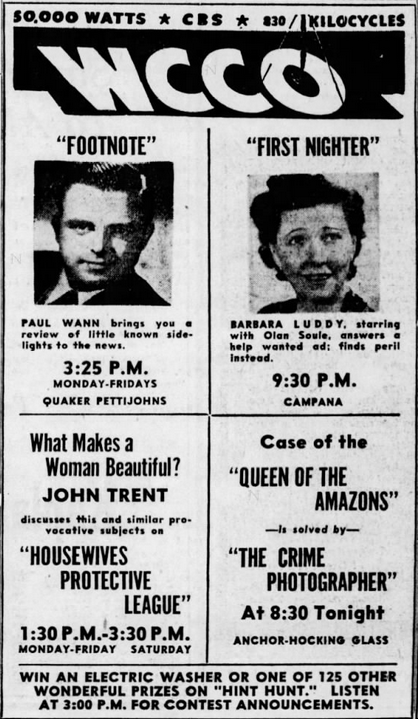 Hope Emerson received credit for playing "Queenie." She was perfect for the part: 6'2", 230 lbs. She may have been cast in the role because she literally fit the stereotype of a circus strongwoman. Casey was broadcast before a live audience and they likely desired a reaction from the audience, or possibly wanted to prevent one. Using a smaller stature actress may have caused unintended giggles from the audience that would have been confusing to listeners. Emerson had a varied but successful career in movies, theater, radio, and television. She played "Mother" in the first season of television's Peter Gunn series. 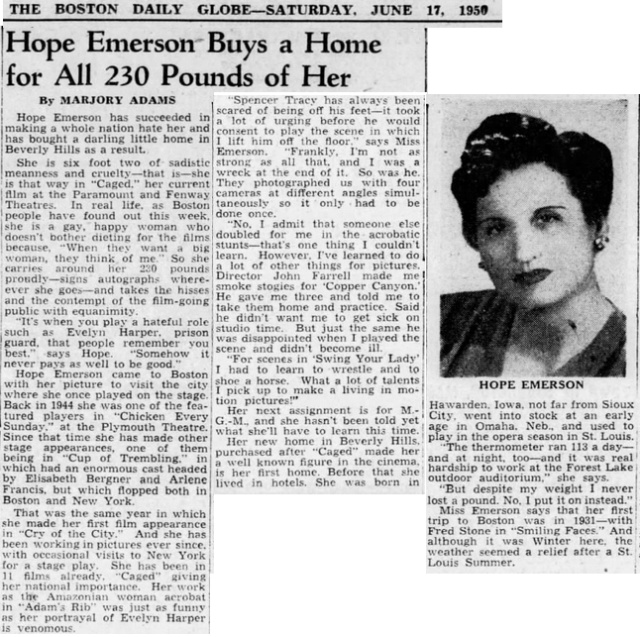