Cupid Is a Killer is a script originally written for the sustained era of the Casey series, but it fits perfectly for the softer and more romantic undertones for the Toni target audience. It's a good and entertaining script, in comic book style, but not one of the series' best.

This is the latest episode of Toni run that is in circulation. Of the five surviving, The Wolverine was the only "traditional" script. The Toni scripts are not all that exciting, but Scene of the Crime offered more of Ethelbert than usual in an entertaining way, and Cupid is a Killer is definitely entertaining because the romantic subplot borders on screwball comedy. Scene and Cupid are still not at the best level of the Anchor Hocking run, but they each have some worthwhile moments.

Casey demonstrates to a love-smitten gangster the error of bumping off the opposition to clear the road for romance. When a man is murdered by a rifle bullet, the police and Casey, set out to break the air-tight alibi of Bat McCoy, known admirer or the victim's pretty wife. A trap baited with honey, a little more cooperation than usual the detectives on Capt. Logan's force, and another murder motive is set in motion - with dramatic and surprising results for everybody.

A killer named Bat McCoy shoots the piano player in his night club in order to have a free field with the widow, Valeria[sic], a friend of Ann and Casey. Kansas, a detective on the case, falls for Valerie and Casey and the police plan a trap whereby McCoy will try to kill the detective. Kansas and Valerie have a fight and Casey substitutes for him. The killer is trapped and after much wrangling between Casey, Ann, Valerie and Kansas, everything is straightened out and Kansas and the widow become engaged.


Casey's knowledge and personal familiarity with his city's criminals is brought into play in this episode.

The Bat McCoy characterization in the episode is very amusing as it is a street thug trying to sound sophisticated and gracious in eulogizing the deceased.

1:08 Ethelbert is bringing lemons up to the bar. Where's Walter?

8:40 The fascination that Kansas has with the Valerie begin at this point. He is absolutely smitten. He even asks Casey for a privately printed photo of her. It's not stalking, because Kansas is portrayed as having pure intentions and wanting the best for her. But he is messing with the object of a gangster's affections... so there is some danger ahead.

10:30 Throckmorton (Kansas) and Ethelbert meet and have comments about each others names. A brief and funny moment.

19:00 Kansas does not like Casey's plan and quits the police! They weren't expecting that, but it leads to the marvelous joke on Casey that makes the episode somewhat endearing. Logan keeps the secret and lays it on pretty thick to get Casey in trouble at around 22:45 and it all blows up on Casey starting at 24:00. The scene is well-done and worth a good and happy smirk if not a chuckle. This kind of scene is what makes the series endearing despite its occasional problems.

25:55 At the Blue Note, Casey is all discouraged, saying that "Ann is off him for life." It does have a very happy ending, and Kansas and Valerie are engaged, but not before keeping the joke going on Casey.

Bat McCoy gets a floral arrangement for the casket that looks like a piano. Don't believe it can be done? Look at this...
https://www.viviano.com/store/itemdetail.asp?id=1996

Bat McCoy used a .30-30 rifle. The history of the Winchester rifle can be found at https://en.wikipedia.org/wiki/.30-30_Winchester

"Throckmorton" as a name comes from England. There's a different radio character with that name, but I just can't remember which character it is :) 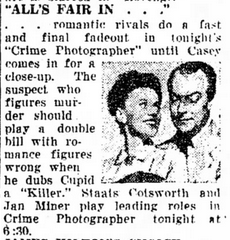