The Coffin is a better than average episode, and yet another one where the primary murderer is a woman... Toni would have never gone for that! It is an unlikely plot but worthy of some of the better comic book detective stories. For that reason, it is entertaining, but not a top episode.

The main recording is not the best, so two recordings are posted, with the second one processed for the disc scratch and the background noise.

There are no ADC continuity notes... the notebook just skips this episode; there are no newspaper clippings. The decision to use the script may have been made closer to broadcast time than usual.

The episode opens with a great gimmick... gangsters trying to buy a coffin for a rival gang leader who is not yet dead... or sick.

0:50 The gangsters walk into a coffin manufacturer asking to make a purchase. The sales representative says his name is "Cook" or "Cooke." The reason that is "a funny name for a casket salesman" is that the largest funeral home in New York City was  Walter B. Cooke. Cooke was a considered a pioneer in the business. 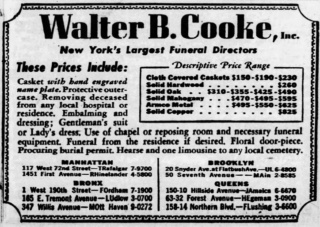 2:00 Nick Maddock is whom the coffin is being purchased for. Andrew Grollo is the gangster buying it.

3:04 Logan calls the casket a "silver-plated slumber box." Earlier, 1:37 the gangster called it a "plush-lined box."

5:20 Maddock calls Logan asking if they have heard anything; Grollo and his gang walked into the police station! This gives them an alibi for the Maddock killing.

7:38 Casey says that they "may find the point" at Maddock's apartment. He sure does. At 13:01 Casey steps on a thumbtack. Whenever something innocuous and nonsensical happens, Cole has placed it there for a reason.

While Casey and Ann are talking to Inez at Maddock's apartment, she's arguing with Maddock and says she's standing by a doorway. She's putting herself in the right position so as not to get in the way when Maddock gets shot.

10:25 She mentions she grew up in a mill town and that her father was a weaver. That's important later.

14:02 Officer Bernstein finds fishing line outside, some of it tied in a "sheet bend knot" https://www.animatedknots.com/sheet-bend-knot  It is assumed that whomever killed Maddock was in the Navy at some time.

15:30 At the Blue Note, two weeks have passed without any resolution to the case. Ethelbert says he knows how to make the knot because his mother taught him, except to her, it was called a "weaver's knot."

All of this leads to Casey's theory that Inez, Maddock's girlfriend, created the combination of fishline, thumbtack, and gun, to give her an alibi because she could execute the plan in plain sight of people who would be her alibi. In this case, Casey and Ann. It was also coordinated that Grollo's gang would all be in jail at the time of the shooting. The rope ladder outside the building was used as a decoy.

20:25 Ann turns on the light in Inez' apartment, and Grollo is there looking for evidence, too. 20:54 There's a gun in the room, as Ann says "we're always willing to help a man who has a gun pointed at us." They're all looking for a clamp that held the gun. Grollo says she made him sign an incriminating letter.

22:07 Inez and Grollo shoot each other convinced that one double-crossed the other.

Ann calls Ethelbert a "skinker." The word means "someone who pours liquor." In recent years, there is a vastly different and more obscene definition, which could cleanly be described as a "woman on the prowl for a man." Casey says "skinker" is also a kind of lizard, which is correct. https://en.wikipedia.org/wiki/Skink

The AFRS announcement includes the cast and identifies the network with "This is the United States Armed Forces Radio Service, the voice of information and education."

Here are the two copies, one essentially raw and the other one processed.

Since there are no newspaper clippings for this episode, here are some other interesting items 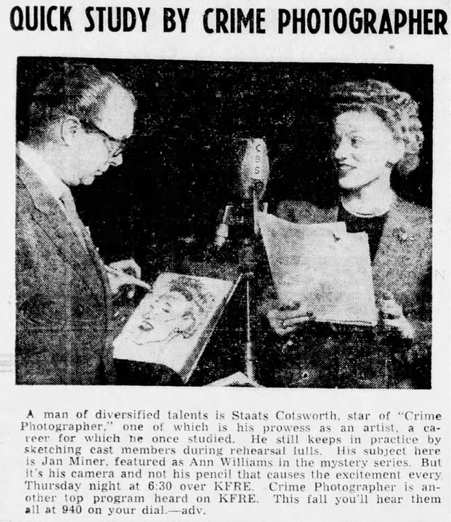 Casey was generally disliked by radio critics, and one of the bigger naysayers was John Crosby, right from the beginning of the series. In this column, he sneers at the series, and by extension, its listeners. He could have, at least, gotten the character names and their spellings correct, but he did not. Since he is critiquing a particular episode, I thought it might be interesting to show the notes from the continuity book that I have been working from. The episode he targets is not in circulation. 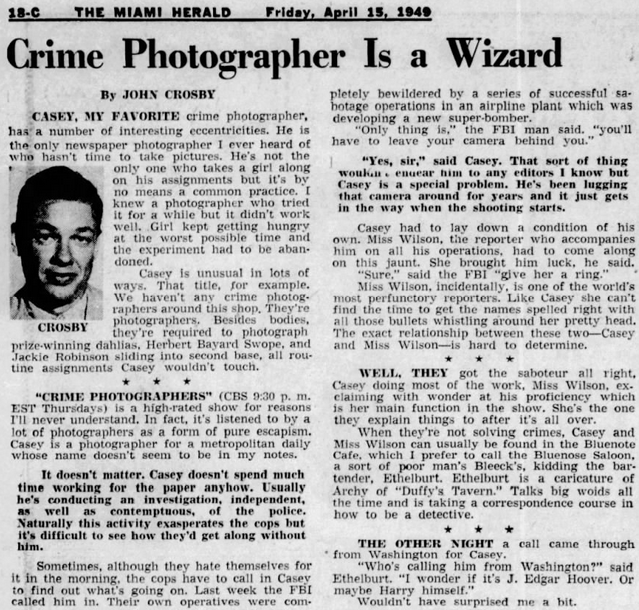