Holiday is the first circulating show of the Toni run. Toni started sponsorship about eight months earlier. The first noticeable change is Bill Cullen as the announcer. The Toni run was quite a departure. Where the Anchor-Hocking run was targeted to families, the Toni run was targeted to women. The in-show commercials are rather awful. The stories were still in the usual Casey style, though they seemed less violent, and had fewer characters with dialogue. The spark was no longer there.

"Biff", a reformed safe cracker, is threatened by his old gang who want him to pull just one more job for them. When Biff stays straight and turns down their offer of $5000, they plant a hot gun in Biff's store and threaten to reveal its presence to the authorities. Biff is caught in a tricky double squeeze. If he refuses the job, the police will be led to the incriminating gun. It he tries to get rid or the weapon, the gang will tip the police to nab him in the act. Biff's holiday seems as dark as a Thanksgiving turkey's future until Casey and Ann Williams do some very fancy wishbone work with the thugs.

It's pretty clear that Casey and Ann's relationship may have deepened as they are spending Thanksgiving together with big plans for the day. We know Casey has no family, but that Ann does. Her family is at a distance.

4:01 Toni's ad directed to women is straightforward. It does feel like an ad one might hear on a soap opera, not a detective program. At this time, Toni was also sponsoring Nora Drake.

After the ad, Biff and Casey have a very long dialogue that fills in the story. This is a sign of smaller budget as there are no foundational scenes with some of the characters mentioned. There could have been a scene with a gang member actually offering the money to Biff, and also his discovery of the gun. This is one of the ways Cole "softened" the show -- describing violent or threatening acts by words alone without presenting or staging them.

10:48 Casey's at the Blue Note apologizing for leaving her there all afternoon and missing their movie date. Again, no action, just description of past events and people.

13:50 Walter tells Casey he has a phone call from Biff -- doubling by one of the actors -- a much different interpretation of the character than prior episodes.

16:00 Suddenly, Ethelbert starts singing. Bill Cullen arrives at the bar for the commercial break. Ethelbert briefly explains where Casey and Ann just went. Cullen starts reading the ad copy with Chittison in the background. Ethelbert is in disbelief that more than a million women used the Toni product. He says "that's a lotta women!" The staging of the commercial seems awkward. Comedy programs did an interesting job integrating commercials into their dialogue, with the best example being the Lucky Strike commercials in the Benny program. In the Anchor-Hocking series, the commercials were distinct and separate.

20:28 Casey gets an idea to help Biff. It came after he and Ann were discussing a western movie they saw.

Biff is being terrorized by gangsters, yet not a single one has been heard in the story. 20:58 Casey tells Biff what to do when he cracks the safe and to get into the getaway car's back seat and to brace himself.

23:35 Casey's ruse works... the gangsters are in the car, obviously knocked out... so they have no lines of dialogue!

25:30 Ethelbert apologizes that there are no turkey dinners left, so they're basically getting leftovers because the cooks left hours before. Ann says it was a "swell day" because of accomplished. Casey is appreciative and says "you're a pal, Annie." This is another situation of sloppy continuity as the word "pal" was contentious in a prior episode in the A-H era. Ann did not want to be treated like a "pal" then.

An entire mob is wiped out and brought to justice... without a single word of dialogue for them.

Captain Logan (Bernard Lenrow) is not in the episode. This episode, broadcast live on Thanksgiving, could have been written with the purpose of minimizing the cast so actors could spend time with families... and perhaps there was a pay differential for holiday assignments that was avoided. Logan was also missing in the prior year's Thanksgiving episode After Turkey -- The Bill. That episode had a police character; this did not.

Bill Cullen is the announcer. I remember him as a very likeable TV game show host. He had an interesting life after being stricken with polio as a child, serving in WW2, and being involved in numerous TV shows.
Wikipedia: en.wikipedia.org/wiki/Bill_Cullen
Find a Grave: http://www.findagrave.com/cgi-bin/fg.cgi?page=gr&GRid=7446 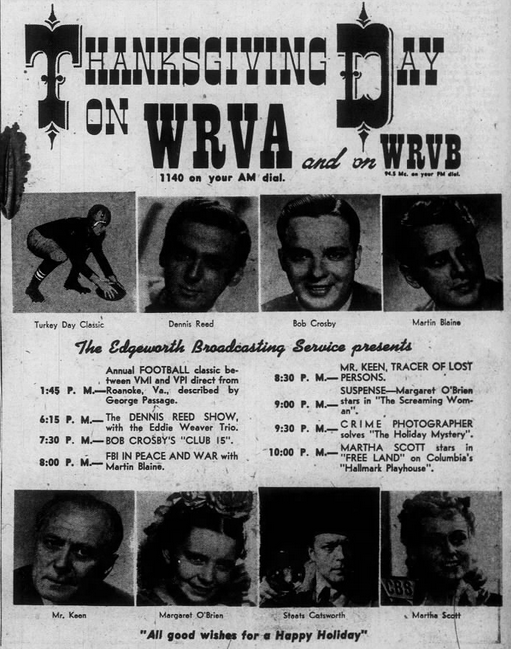