Ex-Convict is a rather basic and good Casey episode where he goes undercover to solve the crime. His knowledge of the criminal class in town helps him infiltrate the fraud operation. His interplay with "Shirley" is funny in light of his admitted problems with women and his relationship with Ann.

Casey picks up a young and good looking hitchhiker who proves to be Ben Holden, recently discharged from prison after serving a term (his first conviction) for armed robbery. Ben is determined to go straight and Casey drops him off near the suburban home of wealthy Asa Maddox, a philanthropist whose chief hobby is the rehabilitation or ex-convicts. Ben says he has been assured that Maddox will secure a job for him. A month later, reliable witnesses identify Ben Holden as the armed bandit who escaped with over $30,000 after holding up a paymaster. Subsequently Ben is found dead, the apparent accidental victim or a hit and run driver. But only a small identifiable portion or the money taken in the robbery is found on him. Convinced of Ben's sincere reform and suspicious because other ex-convicts who have received assistance from Maddox have speedily gone back to a criminal career which ended with their deaths, Casey decides to conduct a personal investigation. Posing as an ex-convict himself, he gets acquainted with Maddox and with the latter's luscious blond secretary, Shirley Reade. With mounting excitement, the story comes to a thrilling climax when Casey uncovers a killer.

5:10 Ethelbert calls to Joe the bartender... no answer.

9:54 Casey is undercover under the name "Dan Stacey," and goes to Maddox' home. There he meets Maddox' butler, Eggles who sounds like he's from the rough side of town. Casey says "I thought all butlers had English accents." He's told “I see you got your education from the movies.”

Casey goes undercover to get to the bottom of Maddox' scheme. He gets close to Shirley. She may be responsible for Holden's death and the two others who "got too close to her."

16:14 Casey is asked by Eggles if he knew "Ross Taylor" in prison; he says that he did not. His cover may be starting to unravel as Casey's told Taylor was the prison doctor.

18:40 Shirley asks Casey to pick up some jewelry... and Shirley will drive. 19:40 Shirley mentions her roadster is "getting pretty old" and is a 1939 model. This is important to the conclusion of the story.

21:20 Casey walks into the jewelry store and meets Mr. LeBlanc. He's handed the package. 22:13 Eggles surprises Casey in the stairwell. He's got a gun and gets into Shirley's car with Casey. As they start moving, they hear an alarm from the jewelry store. The entire scheme is explained. Money is turned over, reported as stolen, and then claimed for insurance. Eggles admits he tried to frame Shirley. The car had a rumble seat -- and Casey had one of Logan's men hiding in it and he saves the day! The rumble seat possibility was identified when Shirley said her car was older, from 1939.

If you're not familiar with “rumble seat,” it's a seat that was in what would be considered as the trunk area of a car. When opened, it would be an open air forward-facing seat. It disappeared from cars by the time WW2 got going, from the research I could find. It would definitely not be considered safe by today's standards.

The last names Holden (possibly a reference to one of the early Casey scriptwriters, Charles Holden), and Maddox (the central character in The Laughing Killer) are given to characters.


1948-01-14 CBS Press Release
This is curious... Lenrow gets no credit in the broadcast, but gets it in the press releases. He did get credit in the releases for The Handkerchief, and Red Raincoat, but not in the programs. 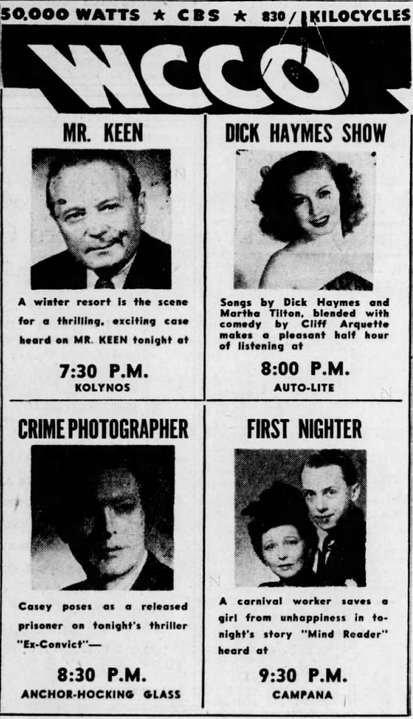