Christmas Shopping is one of the more entertaining entries in the series with a lot of playful banter between Casey and Ann. It's one of the times where the program feels almost like the 1980s television series Moonlighting, without the romantic stares.

There are a lot of details to the story, and it's surprising that Cole can fit the amusing moments into a such an episode (including Ethelbert choosing a Christmas tree from a door-to-door vendor). Their presence makes me wonder if this was the result of some meetings about the show and how to increase its appeal by exploiting the relationship of Casey and Ann a bit more. These definitely make the show better and more interesting, and reminds us not to take it all so seriously, despite the crimes and occasional gruesomeness in the storylines, Casey is a pleasant getaway from the drudgery and problems of daily life. Aside from a production flaw at the end, this may be one of the series top five episodes.

A year old kidnap and murder of Gregory Walters is opened when part of the $50,000 ransom money is past [sic, passed] at a bar by Fingers Fogerty, a small time crook. Casey and Anne Williams saw fingers lifting a wallet from John Pentza. Not believing the cops theory of Fingers being the kidnapper, they locate John Pentza on the theory of Pentza knowing Fingers methods and leaves himself open to Fingers lifting his wallet, thus finding out how hot the money still is. Casey and Anne are caught by Pentza and his brother and left to suffocate, but with the aid of a ten-truck crash on their way out, and get the brothers.


This is the first time that "Ann" has an "e" at the end in Coles notes that I have found. It may have been a different typist that day transcribing the notes, because it reverts back to Ann on the next page.

The name "Pentza" is not really a last name that I can find. But "Pensa" is a common Italian family name. Cole may have spelled it this way to ensure that the actors pronounced it the exact way he wanted.

The pickpocket in the store is “Fingers Fogerty” whom Casey refers to as a “dip,” which is slang for pickpocket. It's clear that Casey knows many of these common criminals by sight and name. They know him, too, and sometimes ask for help.

The large man that Fingers picked refuses to report being a victim – and that raises Casey's suspicions that some part of having his pocket picked must have been planned! It turns out (I hope we're past the spoiler alert thing) that kidnappers were trying to determine if $50,000 in ransom money from a year ago was safe to start using without raising suspicion. They knew the money was marked, so having someone with a criminal past get it and use it might frame them while keeping the kidnappers identities unknown. They would just wait to try again another time. If the pickpocket uses the money and it is not detected, the kidnappers can finally enjoy their big score. That's more than $550,000 in today's value.

Casey does not think Fingers is capable of a big and intricate crime like a kidnapping, which is why he is skeptical. But Fingers has a record, so suspicion by the police makes sense though in the grand scheme of things it is not logical for the type of crime at the core of this episode.

Another character without any lines: Jake Berkin, police reporter for the Morning Express. Could be Bergen or something like that. "Fingers" doesn't have any lines either!

7:30 What does Casey say Fingers is? It's hard to make out -- but Cobalt Club member rearle1 believes he figured it out as "slimy little sneak thief." I agree.

12:20 Logan makes a joke that would not be allowed today about how the mug shot book of the women arrested make them just as ugly as the men.

14:40 Ann makes a joke in response to Casey saying he'll meet her outside her apartment in his car in 15 minutes. Ann needs more time. Ann negotiates to get a "full hour and no sooner."  Casey grumbles that he can "bathe, shave, and get into his clothes in 10 minutes." Ann explains that she needs more time saying “I put on underwear” with special emphasis on "I." This gets a chuckle from the audience. Everyone knows Casey is freewheeling and always on the unkempt side. Dialogue like this reinforces it but also indicates the difference in social status of Ann and Casey. Ann is college educated, at that time an indication of a wealthy family and upbringing, and about 25 years old. Casey is in his 40s and a crusty hardscrabble news veteran. There are points in the series when Cole wants us to develop amnesia about the age difference and that it is actually narrower.

Nick Pentza is in the mug book – because of the facial resemblance, Casey suspects Nick is brother of the large man whose pocket was picked by Fingers, whom they learn is John Pentza.

As far as the playful chatter of Casey and Ann, this episode has a marvelous exchange (starts around 16:30) in a drug store's ice cream shop. It's a reminder of a time when drug stores served food, soda, and ice cream and were not the mini-supermarkets of today. While reviewing the case, Casey and Ann choose chocolate ice cream sodas. But when it's clear that Casey's premise when questioning the soda jerk is obviously wrong she switches to raspberry. When the soda jerk asks “who gets the raspberry?” Ann says to give it to Casey. Giving someone a “razzberry” is the same as a “Bronx cheer.” This little exchange is one of the reasons that even shows with a light or very transparent plot can be so entertaining. http://en.wikipedia.org/wiki/Razzberry

At the end a little girl says “you didn't take a sip of your raspberry, Mister.” And Casey says “that's what you think, sister.” This kind of dialogue may have been what convinced Toni that the show could appeal more directly to a female audience after Anchor Hocking abandoned their sponsorship.

To jump ahead a little, the Toni shows lacked the tension and danger of the A-H shows, which would not return until the Philip Morris sponsorship began. Then the shows writing would return to its more familiar balance which would have general appeal. In the early 1940s there was concern about violence in radio and the number of murders. Cole was aware of the concern and many Casey scripts have murders but are balanced in other scripts without them, and he usually planned the series with that in mind.

17:00 The old man in the store says that Casey is looking for “Penner” which he corrects to "Pentza." The audience would have recognized as a reference to Joe Penner, which makes it humorous. The Depression-era comedian was still known at this broadcast though he had died of a heart attack in 1941 at age 36 five years before. https://en.wikipedia.org/wiki/Joe_Penner  It is kind of a dark joke that Casey might be looking for someone whom everyone knew was dead. But it's used to reinforce how elderly the man was in that he was hard of hearing and that he heard the name misunderstood it as one he was familiar with from long ago.

The sound effects of the gunshots and car crash that bring the story to a close are not particularly convincing. So much of Casey is so well done and it occasionally falls so short in scenes like this. The Hollywood sound effects pros always seemed to make better crashes than the New York ones. (Excepting some of the recorded effects crashes used for YTJD which are not executed well). Car crashes are often used by Cole, so I guess we'll just have to get used to them.

The Boston dialect gets some play in the episode with a Christmas tree sales claiming that his trees are direct from Nova Scotia. He says it in an embellished dialect as “Nover Sko-tee-yer.” Nova Scotia and Boston have had a special relationship since 1917, when Boston sent volunteers to Halifax after the disastrous “Halifax Explosion” of military explosives on ships in the harbor during WW1. In 1918, the people of Nova Scotia sent a special Christmas tree to the people of Boston. The tradition was renewed in 1971 to commemorate the relationship of the cities and to promote tourism. Every year, the tree is always displayed at the Prudential Center. It's not as large as New York's famous Rockefeller Center tree, but it is quite impressive. What is not known is if the sending of the tree was common between 1918 and 1971, and was one of the reasons for the mention in the script as reflecting Boston life.
http://en.wikipedia.org/wiki/Halifax_Explosion
https://en.wikipedia.org/wiki/Boston_Christmas_Tree
Halifax was one of the stops on the 2019 Radio Spirits cruise -- one of the tours described the extent of the explosion and how far it reached. It was quite something... and appreciation to Boston is still expressed. Halifax is also known for taking in casualties of the Titanic, and became the site of many innovations in forensic science and record-keeping for such tragedies, many of which are still used today.

Good news everyone! Crime Photographer has been renewed!
Billboard 1947-01-11 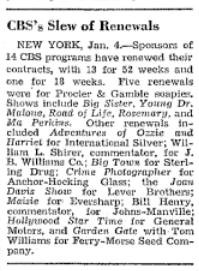