Today's show posting is one that befuddled collectors for years. No collector knew the correct name of this episode with certainty for decades. The only copy of the episode was in awful sound. It was often listed as "Truth... or Tooth?" in catalogs and it's still listed as "Truth or Tooth" in RadioGoldindex. The Siegel-Cox book set it straight once they had original source materials from CBS and Cole's files. The press release item is reproduced below. The sound is still so sub-par that you can barely hear "for a" but it's there... and you can understand why some believed the other titles were possible if you were a collector listening to recordings that were in worse sound so many years ago. We now know it's Tooth for a Tooth.

Brower, who works with Casey on the paper, confides that he has a premonition that he is going to die. He also mentions that he has had some dental work done by a Mr. Rennat who is not a licensed dentist. Later, Brewer disappears. Casey goes to see Rennat and tells him that Brower told him he could fix teeth. There he finds that Brower almost starved to death. Rennat had changed Brower's dental work to match his own in order that his body would be identified as Rennat and Rennat's wife could collect the insurance. They had worked this racket before and the gimmick about "Rennat spelled backwards is Tanner" is the clue to his real identity.


Cole's gimmick is really obvious -- and that's one of the reasons the show is endearing -- even the most unsophisticated listener can feel like they could have solved the case. The reveal of the gimmick occurs early in the episode with Ethelbert playing word games. Cole often introduces the method of the solution early in the stories, and then Casey suddenly remembers it and and uses it to solve the crime. This is one of the ways Cole involves listeners in the story and makes them feel they solved the mystery along with Casey... who always turns out to be the only character working on the case who detects the connection.

Since most people have some dental fear, one can imagine the anxiety people had with the drills and anesthetics of 1946 compared to what is available today. Having the crime take place in a dental chair probably made listeners cringe a great deal, even if it was a minor repair, almost like what we might feel watching the famous dental scene in Marathon Man. https://youtu.be/2xBJERznOgA

The director of this episode was Rocco Tito who was a director and producer at CBS and then moved to Mutual to produce Mr. Feathers and the (awful) Mutual production of Counterspy when that moved from ABC.

This was another Holden script... a load of Cole scripts are about to follow with the beginning of the Anchor-Hocking run.

The title is based on the biblical description of justice and is mentioned in Leviticus, Exodus, and Deuteronomy, along with the more famous phrase "eye for an eye." http://en.wikipedia.org/wiki/Tooth_for_a_tooth This passage of the Bible is often misinterpreted as advocating vengeance in punishment, but is actually advocating restraint and proportionality in having punishments fit their crimes. In its use here, it's just a play on the topic of dentistry, but also describes the motive for the crime: duplicating the criminal's dental profile in Brower's mouth on an exact tooth for tooth basis as a part of an insurance fraud scheme.

There was one more sustained episode before Anchor-Hocking began its sponsorship. The show is missing, called A Girl Named Kate broadcast on 1946-07-22, and it was a repeat broadcast of a script used on 1946-12-12.

The A-H sponsorship changed the series for the better. A larger orchestra, a fuller cast, better production techniques. These were the best seasons for the series. It had very, very good ratings across most demographic categories of the listening audience. 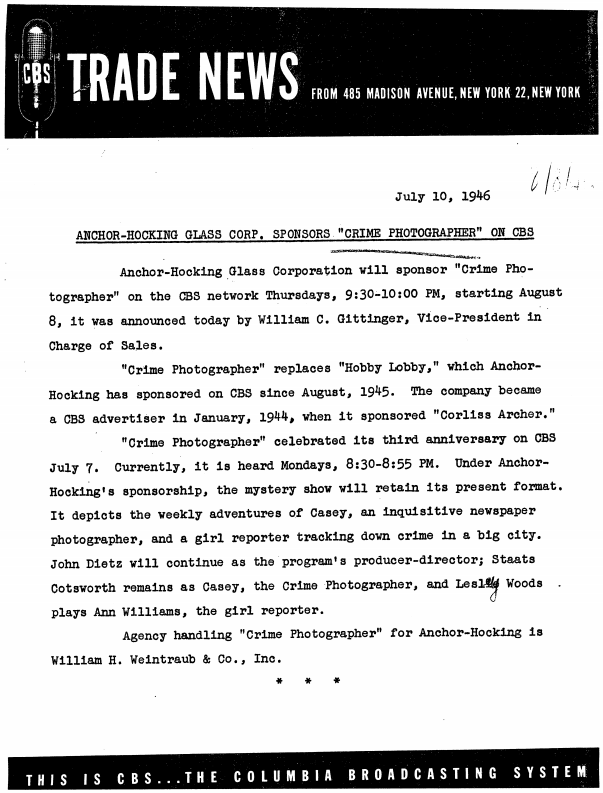 The first A-H show, Three Sapphires is not circulating, but a review of it is below. It was not well-liked. The Variety review (I think in its 1946-08-14 edition) was not very complimentary: "he and his gal Friday might just as well have been assigned to a Sunday School picnic for all the suspense and drama that they managed to convey." What would Ethelbert say? “As my sister Edna says... quote 'if dem critics was any good, they'd be on stage demselfs' ... unquote.”

The Wikipedia page for Casey is at https://en.wikipedia.org/wiki/Casey,_Crime_Photographer_(radio_series)
The page details the beginning and ending dates for the various series names that were used.