I have a great affection for King of the Apes since it was one of the first Casey I heard. The top five episodes so far have been Christmas Shopping, Demon Miner, and perhaps this one. I'm undecided, but it's near the top five at least. One episode of the top five will be added in the next post.

Cole would often get story ideas or ideas for elements of stories like jokes from the local news. This was done because a little spark now and then from reality always helps creativity, but it also helps bond the audience with the story because they've heard the news, too, perhaps. In this case, Ringling Bros. Barnum & Bailey Circus was on tour and was at Madison Square Garden in New York City from late March through April and May. Remember, Cole was living in Mt. Vernon, which shared a border with the Bronx, and it was just a subway ride into Manhattan. This is a review of the circus from the NY Daily News... and it's followed by a story of a clown dressed as an ape in the White Plains, NY newspaper (not far north of Mt. Vernon). It's likely it played a role in his thinking about the story. 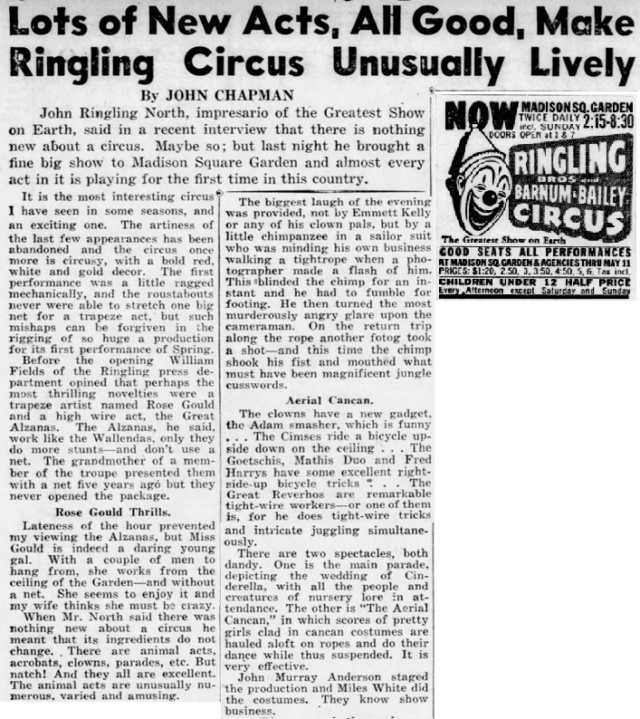 1947-05-05 White Plains NY Journal News
Is this one of the performers Cole saw if he visited the circus in April? 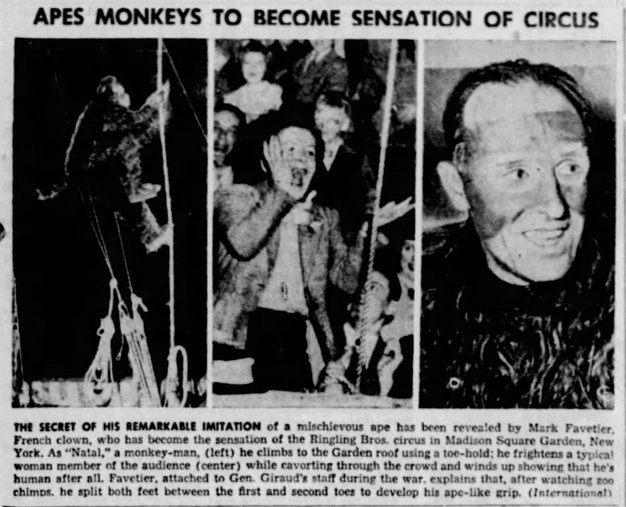 Using a circus as the venue for a murder was not a big deal. Gosh, Charlie Chan solved one of those cases a decade before! It's believed the murder was by a gorilla! But Charlie solves the crime... https://en.wikipedia.org/wiki/Charlie_Chan_at_the_Circus
https://youtu.be/89MMEVNWBxg

Circuses were still highly regarded at this time before television started to take over entertainment leisure. For many who did not have access to a zoo, a circus was the first time they might have seen a lion or an elephant in real life.

Casey and Ann go to the circus... And this year its feature act is "King -- of the Apes." Charles King, a remarkable animal trainer, presents half a dozen orang-utans from Borneo who perform at his command. Casey and Ann witness a startling and unscheduled development in King's act. During King's performance with the animals, a strange animal cry is heard coming from somewhere in the huge auditorium that brings King's animals to arrested attention. When the cry is repeated, they turn on King and destroy him. During their investigation of the savage killing, Ann and Casey meet King's widow, Bernice; his assistant, Johannes Fleit; and a strange little oriental, Tayan, who demonstrates that he can handle the fierce animals better than Charles King ever could. Now that King is dead, Tayan will take his place as "King -- of the Apes." Casey and Ann are assigned to remain with the circus and are in the uncomfortable position of being able to report other deaths, mysteriously caused, at the hands of the orang-utans. In a weird and exciting sequence of events, Casey learns about some of the habits if the primitive tribe members from Borneo - something about a strange knowledge they are reputed to have - and some dangerous things about orang-utans. The police arrest Tayan for the killings - but Casey investigates further and brings forth the real killer -- Johannes Fleit...


Tayan is a Dyak, a native of Borneo. If you're not familiar with the term, this Wikipedia entry can help https://en.wikipedia.org/wiki/Dayak_people

12:55 Casey giggles like a little kid when he sees orang-utan riding a tricycle. Ann snaps him out of it. In fact, she has to keep him focused a lot during this episode as he's always looking at the circus women in tights and saying he likes their eyes. The giggling is interesting because it is silly, but it also shows Cotsworth's range.

Circuses have fallen out of favor for a couple of decades now, and reliance on animal acts for entertainment has fallen faster. Another change has been the practice of euthanizing animals that have killed or caused great injury to their keepers or others. There is no indication in this story that these sentiments and practices have developed or are starting to develop. Some of the script lines about Johannes and Tayan might be considered highly offensive today, but they do have a place in supplying the motive behind the crime and also the story's ultimate justice, with that justice provided by one of the animals.

This episode is interesting in that it was later adapted for the Casey comic book. It was in issue #1 as The Monkey Murder Mystery

Casey's boss Burke is another character who never has a line. All we hear is Casey's side of a phone conversation. But, in the comic book, we do see him! (page 6 of the comic story) 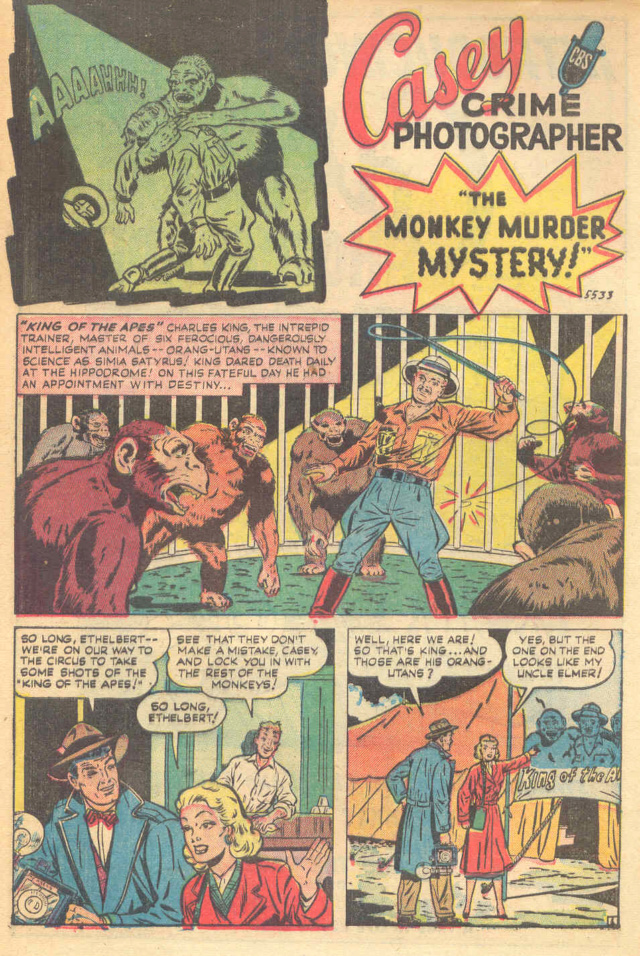 The artist for the Casey series was Vernon Henkel, kind of a journeyman artist who specialized in crime and war comics. He went on to work in advertising ... and from my checking of various comics history sites, he may still be alive in his late 90s!

At the beginning of 1947-05-01 King of the Apes, Tony Marvin mentions that it's "Noise Abatement Week." This clip notes that "Boys and Girls Week" is celebrated at the same time. So they asked Governor Thomas E. Dewey if there was an intended connection! It was unintended and his office said it wasn't of his doing. But their concurrence is certainly amusing. 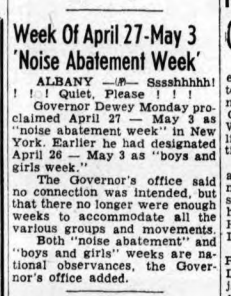