Laughing Killer is one of the series better entries. I'll put this as number 5 in my top five as I'm reserving some spots for other episodes. That makes it three of the top five identified so far.

We always assume that "Walter" the assistant to Ethelbert the bartender never has a speaking role. Usually the only reference to him is Ethelbert yelling down to the basement "Hey Walter, bring up more lemons!." He does appear briefly in the opening scenes of this episode. Cox and Siegel speculate that reference to Walter and other non-speaking characters may have been a device to be sure the episode filled the right amount of airtime. These lines could be easily added or deleted. There may be lots of Walter laying around on radio's equivalent of the cutting room floor.

At the end of the show, Tony Marvin apologizes that the promised big announcement from Anchor-Hocking won't be made until next week. Unfortunately, that show, Mad Dog, is not in circulation.

The central character in the story is bandleader Artie Maddox, who is framed for the murder. Maddox is described as leading a “sweet band.” This is a kind of big band music that had less improvisation, and was targeted to upscale audiences, especially for dancing. It was the kind of romantic and melodic big band music that was popular before swing music came into vogue. Examples would be Paul Whiteman, Fred Waring, Ben Bernie, Rudy Vallee, and many others. One of the most famous sweet music songs is Midnight, the Stars, and You by Ray Noble's orchestra with singer Al Bowlly... because it was used in The Shining. https://youtu.be/8XLm-und-qc  Bowlly lost his life in the German air raids of London.

Is there a continuity issue at the opening commercial skit? When they are chatting about baseball, Ethelbert says he follows the (Brooklyn) Dodgers and Casey says he follows the Yankees. If the setting of the show was in Boston, it would have been the Boston Braves and the Boston Red Sox. The Boston Braves moved to Milwaukee after the 1953 season. Perhaps Cole felt that the New York teams would be better known and have a better sense of rivalry.

Throughout the Casey series, a big city like New York seems to be implied, but it is purposely nebulous in the scripts. The show was produced in New York, so being Yankees and Dodgers fans would be common. Strangely, the New York Giants were a more successful team than the Dodgers, but did not have the charm of the Dodgers. The Yankees were the Yankees. No need to say more.

While Casey and Ann are sitting in the Blue Note Cafe, they meet up with a young man who has recently been paroled after serving several years on a manslaughter charge. The man, Art Maddox, has been drinking heavily and is laughing hysterically. Maddox had been convicted of killing Phil Blaney, a gambler, during a fight in the apartment of "Gipsy" Hibbard, a night club singer. Maddox was in love with Gipsy and Casey has reason to believe he took the rap to save her from a murder charge. Casey persuades the hysterical young man to leave the cafe with him -- he takes him home and in the process of helping the almost-unconscious Art Maddox up the stairs to his apartment, Casey discovers a gun in Art's pocket. But before Casey can get an explanation, the police arrive and charge Maddox with another murder. It seems that Gipsy has been found shot to death by a pistol of the same caliber as that found by Casey on Maddox. Despite the overwhelming evidence against the paroled killer, Casey stubbornly maintains a strong belief in his innocence. The believe is strengthened when he finds out the reason for Maddox's hysterical laughter. It seems that Maddox was in Gipsy's apartment the night that she was killed - but also present was Gipsy's ex-husband, Lew Carbone. Gispy threatens to tell the police that it was really Lew and not Art who killed Phil Blaney - and to prevent her from revealing the true facts, Lew Carbone kills Gipsy. Art is a helpless witness to this scene and his inability to help Gipsy to prevent the shooting shocks Art into a state of laughing hysteria. This spell of hysteria is broken only after Art is able to tell his story to Casey and the true murderer is caught.


1:45 Walter speaks and has a pretty big part as he serves Artie Maddox
2:35 A bullet that plays a big role in the story is in the money Casey gives Ethelbert to buy a pack of cigarettes... Cole plants it and its caliber sizing in the story early
3:14 Cole lays out all the characters early because the plot is built on a foundation of a past crime. It's all pretty complex. But he's already identified a key element, the bullet, and that Artie Maddox was either framed or said he was guilty to protect someone else and will be exonerated in the end. The episode is based on solving an old crime, not a new one, which is an interesting plotline compared to other episodes.
8:40 Casey finds a gun in Maddox' pocket and says to Ann he's "toting a gat," which means he's carrying a gun. "Gat" refers to Richard Jordan Gatling, inventor of a version of an automatic machine gun in the 1860s.
10:35 Cole adds another factor that will play on the story... the different caliber of the gun.
14:28 Casey makes a mental reservation about Artie's gun during his conversation with Logan by saying "I wasn't looking for a gun." Ann is upset with him, and expresses her concern about supressing evidence after they leave Logan's office. Casey didn't lie in what he said, it was a sin of omission -- but it works out.

Lawson Zerbe is credited as Artie Maddox. Zerbe was a real pro in numerous series, and is nearly on the verge of overacting in this episode. He gets close to the edge but doesn't fall over, job well done.

The gun blowing up that Cole uses is a real thing... there are some YouTube videos and other documentation online about the many ways it can happen.

1947-05-08 CBS Press Release
Not sure when this was released so it has the date of the episode in the file name. 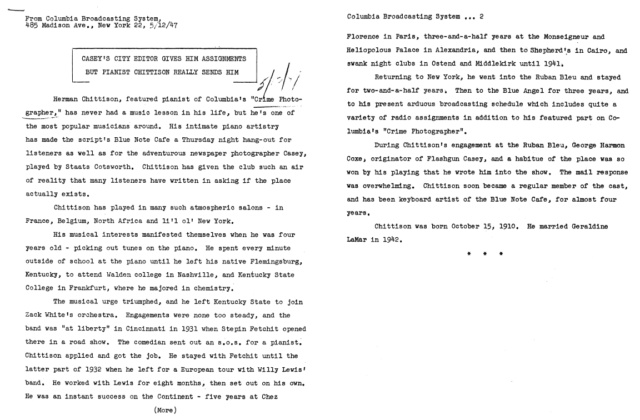 No videos can be found of Chittison in my searches, but there is a recording of Tea for Two https://youtu.be/cMePHI8ixjE  and many others there.