Box of Death is the first circulating episode with Jan Miner as Ann, though she is not credited as the character. Until some other recordings surface, it's not clear what they did before this episode about the character after Woods left. It is possible Woods was on the show one more week after Demon Miner. It's possible Miner picked up on 1947-03-27 Blood Fact (missing show) since Ann is mentioned in ADC's continuity notes. Miner is definitely in the cast by 1947-04-03 The Girl on the Dock.

Regarding the 1947-04-03 program and the comment in the note about the Anchor Hocking ad about Lent in the Demon Miner episode, Girl on the Dock has Casey and Ann planning to attend Holy Thursday services. Their intent is interrupted by a phone call from person in trouble. There was no shying away from referencing the religious calendar in the series narrative or the ads.

Scene opens on dark street... Cop finds large packing box on the street. He goes to the address noted on box and complains about box being left in middle of street. The woman of the house knows nothing about the box. Box is opened and inside is the body of her husband. While cop is calling homicide squad, she escapes through window. Casey and Ann recognize corpse as one-time gangster who had turned straight and married a check-room girl whose affections had been sought by big-time gangster named Lucky Carson. Casey thinks victim was murdered because of revenge for stealing gangster's girlfriend. He has alibi - says his lawyer and henchman were with him on night of murder, therefore, he couldn't have committed the crime. Casey, through his connections, locates the wife of victim and persuades her to pay a supposedly social visit to suspected killer's office and steal a lucky penny which killer always carried with him. Casey knows killer will go after lucky penny so he plants cops around girl's hideout. Killer surprises Casey and takes him to deserted spot to force him to tell where the penny is. Casey persuades lawyer and henchman to turn against their boss and shooting ensues in which both gangsters are killed...

This is another script where Cole uses superstition (in this case it's Carson's luckpiece, a lucky Indian head penny) in a story. The Indian head penny was minted until 1909. https://en.wikipedia.org/wiki/Indian_Head_cent. Most are of little value.

15:40 Carson asks for Crepe "Suzetties" as the after-funeral meal. Cole often enjoys playing with gangsters and others and their attempts to seem sophisticated. Less popular now, it was a crepe that had a sauce made of caramelized sugar and butter, orange juice, orange zest, Grand Marnier liqueur, and served in flambe style.

16:10 Carson realizes the penny is gone and he panics.

17:40 Casey says Emma took the luckpiece to drive Carson crazy, to force him to make a mistake and incriminate himself. Casey gives Ethelbert the penny... shouldn't that be evidence that the police may want in the case? Hmmmm.... no matter, that would ruin the story!

22:53 Casey mentions Carson may end up in "the hot seat" which refers to capital punishment using electrocution and the "electric chair."Only nine US states still have electrocution, with all nine using lethal injection as primary, and allowing the convicted to select the means of their demise. If Casey takes place in Massachusetts, the last electrocutions were a month after this broadcast of two gangsters. The last electrocution in New York was 1963. At the time of the broadcast, hanging was still used in many states.The means of enforcing capital punishment does not help us figure out whether Casey takes place in Boston or New York. The best we can say is it's an amalgam of both.

25:00 Casey shoots Slug... and says he's never shot a guy before. We learn after the commercial that Slug survives.

27:20 Ethelbert is convinced the penny was lucky because he won a contest after getting it. Cole makes a bad pun in what Ethelbert's sister Edna said. (If you don't get it, the clue is "where does one wear what Ethelbert won?") 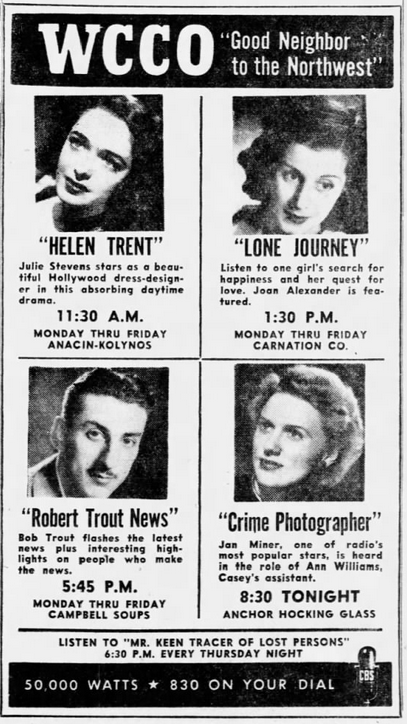 Jan Miner was in radio about 10 years prior to joining the Casey cast. She was also playing Della Street on Perry Mason. It is unfortunate that CBS spelled her name incorrectly in their press release, but they righted their error in a longer backgrounder the following week. But that didn't stop the Harrisburg Telegraph from getting it wrong on their own. 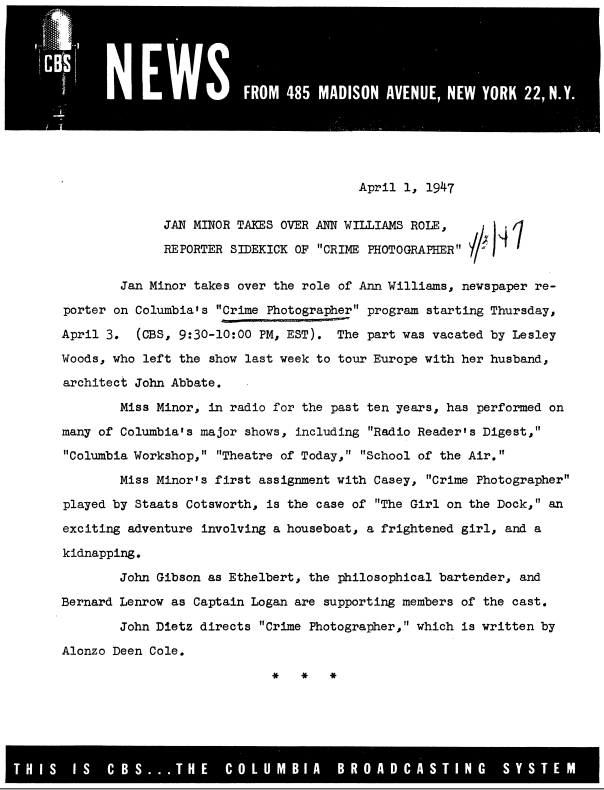 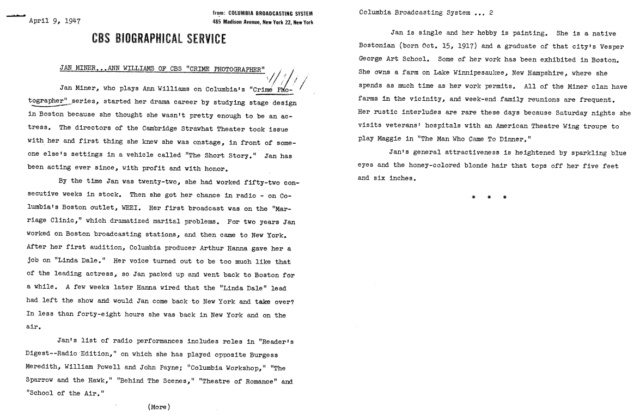 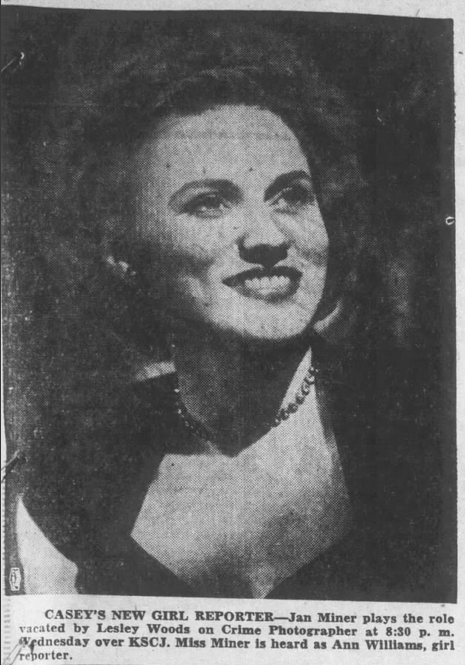