After a five show gap of missing programs after Pick Up, this episode, Acquitted, starts a nice uninterrupted run of 39 shows under the Anchor Hocking sponsorship.

Lennie Waldo, an ex-convict and thoroughgoing bad man, is arrested on a charge of burglary. The prosecuting attorney has a confession signed by Waldo to show the jury. But Dan Freeman, Waldo’s smart lawyer, convinces the jury that the confession had been obtained only after Waldo had been severely beaten by a detective named Big Mike Ryan. Waldo is acquitted, and Big Mike is suspended from the force. Casey and Logan know the beating did take place. But they also know that Big Mike had plenty of provocation – including an attempted escape. Big Mike is heard making bitter and even threatening statements about Waldo and Freeman. Shortly after, both Waldo and Freeman are found murdered. Big Mike is promptly arrested and charged with their murders. Casey and Logan, convinced of Ryan’s innocence, begin investigating. Their efforts are complicated by all sorts of conflicting and damaging evidence. They find, for example, that Waldo could not possibly have committed the burglary with which he had been charged. Casey and Logan get busy and before long they find the real burglar and killer – and Big Mike is cleared of all charges and is set free.


3:46 Casey calls Ann "honey." It has no emotion to it, just a name, commonly used at that time in a friendly manner between men and women. It would not really be accepted in the workplace now.

7:30 Walter asked to serve "two more bottles of beer" to customers and to "bring up some more lemons." No spoken lines. Guess he used up his script quota from Laughing Killer.

10:30 Casey learns that Freeman and Waldo are shot to death. Not having the actual event in the show is a way of minimizing violence over the airwaves. It just becomes part of the narrative. It also reduces the casting and the sound effects work... there are little ways that scripters helped save on the budget.

18:35 We finally hear Joe the Bartender... it was a close call, and it almost seemed like we wouldn't! Ethelbert directs him to bring up some club soda from the basement once he's done chopping ice. Ethelbert gets no answer and asks if he heard him. Finally, Joe responds "Okay, Ethelbert." No clue who doubled as Joe.

18:50 Ethelbert says he was tired because he had to make highballs for a party of eight. He doesn't catch on to Casey's joke that "party of eight" could mean "a person of eight years old." He finally starts giggling. I don't drink (but I should... heavily...) so I looked it up on Wikipedia https://en.wikipedia.org/wiki/Highball and remember hearing about it when adults would be together in the '50s and '60s. Nowadays people are pretty specific about their drinks and don't use a generic term like this. The most common was "scotch and soda," so this may be why Joe needed to bring more club soda up to the bar.

19:20 "Buddy Schell" is another non-speaking character, used to make a turn in the story. He's a law student who is a friend of Ethelbert and has some insight into the case because he sat in on the trial. Casey dismisses Ethelbert's report of the conversation. The more Ethelbert talks, the more an idea to solve the case grows on Casey, and he acts on it.

24:07 Casey says "Oh... why that gun?" Cole always tried to find creative ways to identify the presence of a firearm in the scene. Rather than have someone blurt “You've got a gun!”, Casey might say, “Is that the gun you killed Mr. X with?” Cole had a variety of ways of making the presence of the weapon known and also reiterate part of the storyline in the process. It is amusing to hear how he accomplished it in each episode.

This is a good episode. There's nothing to make it stand out from others. It follows a basic formula of crime, inaccurate or unjust arrest or suspicion, Logan befuddled, a new piece of information, Casey puts it together, Casey in danger by the guilty party, a stroke of luck makes it all end well. There are just enough differences or amusing moments and favorite characters to keep us listening. 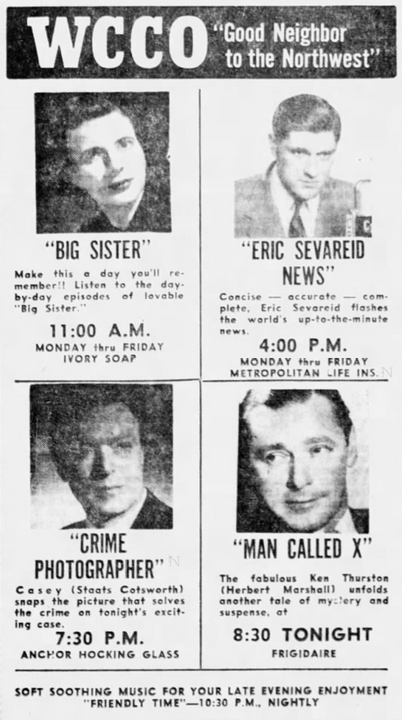