Gentle Strangler has a different approach where Casey is in danger because his investigatory work helped convict a man's daughter. It's the Irene Ivanoff poisoning case from 1939. Casey helped prove that she purchased poison, a photographic chemical, from a photo shop without ever intending to take any photographs. Irene's mother died from the stress of Irene being convicted. The assistant DA, the cop, and the photo shop owner are now dead... and it's clear that Casey is next... with the killer suspected to be Irene's father, out to avenge the death of his daughter and his wife by a justice system he doesn't understand.

It's an entertaining story, but we're asked to believe too much coincidence in its conclusion to add it to the top five.

The program recording has skips at the general 11 minute range and earlier in the show. I am not aware of a clean copy, but if anyone has one, it would be appreciated. Otherwise it's a nice sounding program.

Criminal Courts Judge Whitcomb is taking an evening stroll near his home when he is accosted by a courteous stranger, afflicted with a slight lisp, who strolls along with him. As they reach the shadows of spring-budding shrubbery on a nearby estate, the stranger, without explanation, chokes the Judge to death. Casey and Ann reach the scene of the murder to find that Captain Logan has no clues other than that a passerby saw the Judge waling with a stranger who can only be described as a "big man." An assistant Prosecuting Attorney, Lloyd Dunning, has been similarly strangled to death only a few nights before, so the two men have been victims of criminal revenge. Some days later a detective, Barney Lennon, is found murdered. Then the lisping, gentle-spoken stranger goes to Jake's Camera Shop. Jake is about to close for the evening, but is inveigled into taking the "customer" into his stock-room. There he, too, is quietly strangled. When Casey learns about this fourth crime he is able to to tie it up with the others and to realize that he himself is inevitably slated to be the next and final victim. Neither he or the police have ever seen the suspected killer and, in a suspenseful sequence, despite every police effort to protect Casey, the gentle strangler finds him alone and in a most vulnerable position - in bed and half-asleep. Casey awakens - throws a glass of whiskey in his eyes- temporarily blinds him - then knocks him out -- and so ends the career of the gentle strangler.

In ADC's notes, the word "inveigled" is not used very often any more, but it means to trick someone.

5:22 Ethelbert asks Joe, the assistant bartender (who has no spoken lines), to "take care of the lady at the table... she wants a glass of half and half that's a third ginger ale." Bodybuilding nutrition was becoming an interest, and one of the advocates was Vince Gironda in California, who would later train Lou Ferrigno and Arnold Schwartzenegger among other champion bodybuilders. Gironda's drinks often included heavy cream, but many people would use half-and-half to make what would be the equivalent of today's "protein shakes." Gironda went on to have a successful nutrition products business focused on bodybuilding and people who needed to keep their weight up. Ginger ale was a popular ingredient for drinks and baking at the time, too, and it seems from the newspapers there were all kinds of uses for it, and various concoctions. Mixing ginger ale and ice cream was also popular.
https://en.wikipedia.org/wiki/Vince_Gironda

5:55 Casey says he will come into the bar to buy a beer once the price comes down. Inflation was very severe at the time of the program. From April 1946 to April 1947, the US Consumer Price Index was up +19%. This is also one of the reasons why Anchor-Hocking focused on thrift for many of its purchase justifications. To save money, Casey and Ann ask for water at the bar... and more pretzels... Prices did not start to come down until 1949 after slowing in 1948.

The set-up for the climax is pretty obvious after you hear it. We've seen it in movies and countless TV programs. Casey is being protected by a cop in his apartment. The change-of-shift cop is attacked by the "gentle strangler" who just so happens to be the same size as the cop. He swaps clothes, ties up the real cop, and then goes into Casey's apartment to change places with Mack, the cop whose shift just ended. There's a continuity problem here... Cole makes a big deal about how big a man the strangler is, so wouldn't it be just be plain luck that the uniform would fit? There are procedures in place to have proper shift changes, including photo ID, but they may not have been available or in use at this time. Sloppy! Cole may plead that there wasn't enough time in the show to fully develop it.

Jan Miner is fully credited as Ann. Lenrow is still not in the credited cast. 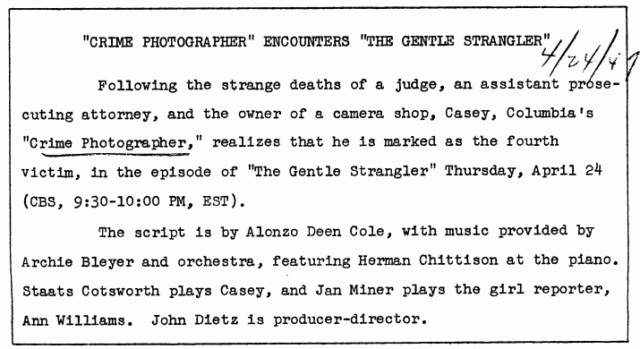 There was a Casey comic book that survived for four issues. This chart shows the stories used and which ones were based on the radio program scripts. There may be others that just have not been detected yet.

Here is the first page of the story. It does not follow the dialogue of the episode with precision (which is okay, but I thought it would be closer), and the ending is changed! 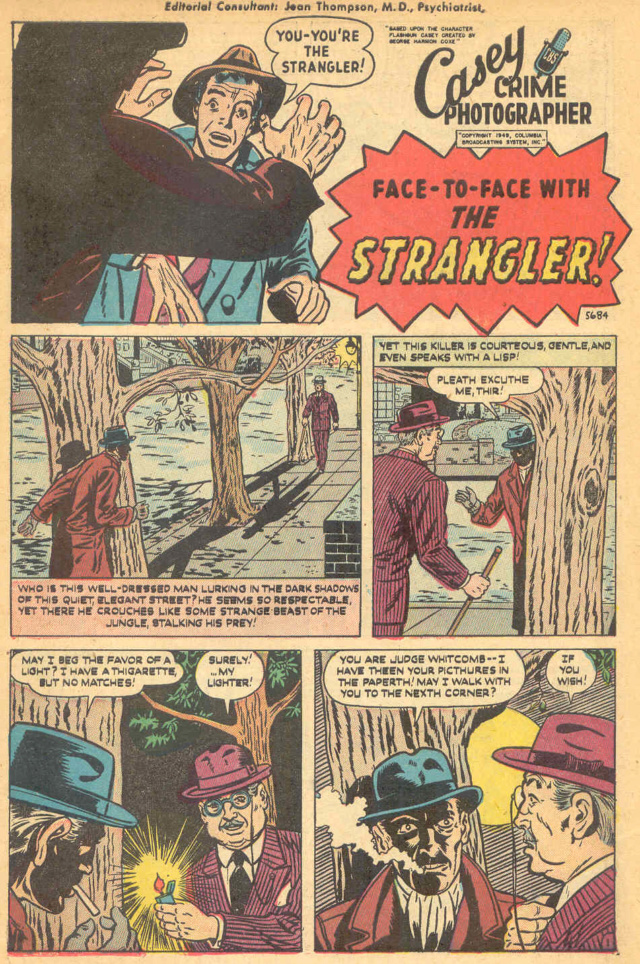 Instead of just knocking the strangler out, Casey throws him out an open window, and it just so happens he gets caught on a branch of a tree, and is hanged. 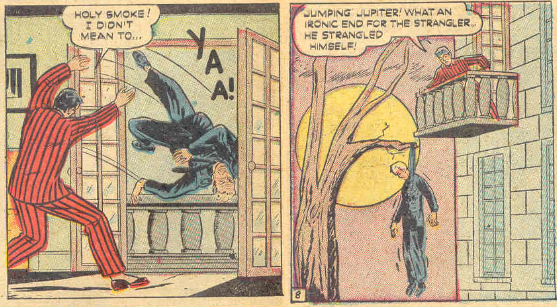