Today's episode has never circulated in good sound. This is the best version of Duke of Skid Row I have been able to find.

A monocle-wearing, cultivated man, speaking with a broad Balkan accent registers as “John Smith” in a flea-bag hotel in shabby SKID ROW. He leaves the hotel one morn and has to borrow a nickel for carfare but returns later that day and hands a taxi driver a five dollar tip. Later that night the hotel owner is slugged by two characters who are after the nice cultivated man whose name is Anton but is fondly referred to as the “Duke” by the owner of the broken down hotel. When Davis, the owner comes out of it all – he finds the two men plus Anton gone – and Anton is found later very much murdered – strangely though – after he had been first tortured and then hung. From the taxi driver who had driven Anton to the hotel they find that he had come from the home of multi-millionaire Brinsley-Case, Ann and the Captain call on Brinsley who has a heart attack and falls dead after hearing that Anton is dead. The group discover a trick chair and a gold crow[n] inside of it – Casey fixes up a fake story for the Morning Express trusting the killers will read same – and fall for trap he has [s]et – they do and they are caught by the Cops – Anton was a refuge who was considered a traitor – the two killers are called stubborn royalists and had wanted the crown to return to their king.


$1 a night hotel – $11 in today’s money. Paying $5 only raised it to $55. Even bad downtown hotels are more than $55 today, often because of the tourist taxes that many municipalities have imposed over the decades.

The Duke pronounces “Smith” as “Smyth” – Cole probably wanted to emphasize that English was not his first language.

In a large city getting the same taxi driver is unlikely unless that specific driver is called (as an independent driver) or requested with the cab company, or if that driver regularly frequents the neighborhood. Where does Casey take place? We never really know as Cole blends New York and Boston constantly, and now blends in an aspect of small town living. Nowadays, the Duke may have used Uber!

Throughout Casey, Cole seems to create a generic Northeast US city; at the time of the series he was living in Mount Vernon, which is on the north border of the Bronx borough of New York City. In later years he lived in Connecticut, which became a tax haven for many higher paid broadcast personnel as they took advantage of train service into New York City. This was especially the case if, like Cole, daily commuting was not necessary. Connecticut's position as a tax haven reversed a few decades ago. The actors who were busiest lived in Manhattan for convenience in moving between the radio studios on foot, taxi, and subway, and also access to everything that Broadway offered their profession. Writers could live almost anywhere and go into town to deliver their work and possibly sit in for some rehearsals and the occasional series and sponsor planning discussions.

Cole would also be quite familiar with Boston and overall New England culture, and that would emerge into the plays now and then with the various dialects and tough-guy language of characters.

The taxi driver calls the Duke's monocle “a one winder eyeglass.” "Monocle" may not have been in his vocabulary.

After each of the World Wars, many monarchies were replaced by representative governments of one form or another, so the Duke's background would have many familiar aspects to the listeners. For more royal titles than you've ever needed go to https://en.wikipedia.org/wiki/Imperial,_royal_and_noble_ranks As we know, it turns out the Duke was actually a Count, which is the title for someone who was the leader of a county.

Mrs. Wheelbracker is back (15:00) and seems to be looking for her husband. It sounds like a telephone conversation but there is no sound effect of Ethelbert hanging up, so she was probably exiting the Blue Note after realizing her husband was not there.

It is interesting that Bernard Lenrow is not being listed in the cast at this time, only Cotsworth, Woods, and Chittison. Lenrow was appearing on NBC as "Geoffrey Barnes" on Molle Mystery Theater at the time, also uncredited. Perhaps there was something contractual that prevented his identification or made it impractical since Logan was becoming a very recognizable role. Radio Spirits profiled him in 2018 on the occasion of his birthday anniversary http://www.radiospirits.info/2018/11/24/happy-birthday-bernard-lenrow/  Lenrow died at age 58 in 1963. His obituaries barely mention radio, but instead his Broadway roles, his teaching speech and acting at colleges, and his AFRA activities.

This is the PR from CBS – not sure of the date it was released, so it has the show date on it. It was probably released around September 12, a week before the broadcast. The spelling of "nickle" was acceptable then, but has since fallen out of favor, and is considered to be incorrect nowadays. 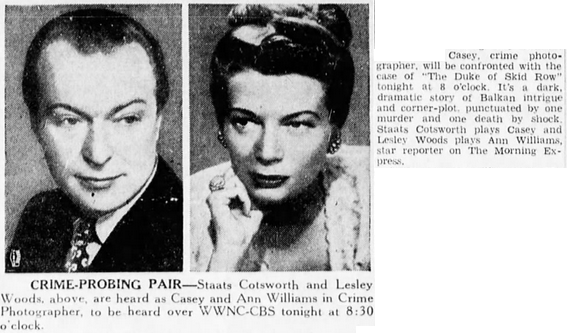 This item appeared in many papers a few days later. The series was becoming popular, and CBS was being more active in promoting it to be sure A-H was getting the audience ratings they needed to be pleased with their sponsorship decision.
1946-09-21 Harrisburg PA Telegraph