Gray Kitten is a mainstream Casey program with a common OTR plot of marrying someone for their riches, doing away with them for the inheritance, and then starting the process over again. It's a tired plotline, but Cole infuses it with a cat and an interesting way of committing the crime that ends up taking care of the perpetrator, instead.

Bleyer's orchestra plays a little riff that sounds like a cat's mew. Some people say the Bleyer orchestra is the cat's meow (sorry, couldn't resist).

Casey, Ann, and Logan might as well be bystanders in this episode. Their presence develops the story but they don't really solve the case... the cat does! The three of them rush in at the final scene and take credit.

This story spans about four months. Most Casey stories cover a few days.

Carlos buried the body of his first wife at Greenwood Lake, according to the story. Cole may have been familiar with the resort there at the time. It was about 50 miles northwest of where Cole lived in Mount Vernon, NY. The resort attracted some celebrities who wanted a break from New York City.

One of Cole's frequent devices is the inclusion of superstition and reincarnation in the story. Some of his familiarity with it is from his work on Witch's Tale, which was, of course, his creation.

18:55 Ethelbert tells Grace to look out and then asks Casey if he saw what she did, and then they and Ann chuckle. They never say what... no sound effect, no lines for Grace, perhaps a near miss carrying plates and glasses. It's all up to the listener's imagination.


Carlos' wealthy wife Hestor disappears. Hestor's sister suspects she has been murdered by Carlos and notifies police. A gray kitten with a white streak is born in Hestor's room at 8:30 the night of Hestor's disappearance. Every time Carlos sees the kitten, or the mere mention of the kitten, throws him into a state of panic... Events disclose money-mad Carlos murdered his wife and he and his girlfriedn, Vera, planned to split the money and leave town... The police have no proof of this until the end of the story, therefore, Carlos is able to go along on his own... He remarries (again, a very wealthy woman) and plans his second murder for money... He and Vera plan to get rid of the second wife, collect her money, and live happily ever after. Carlos prepares a huge trunk with a snap lock and lined with glas tubes filled with gas which automatically break when someone is inside the trunk... This is the trunk he will use in the murder of his second wife... Vera asks him to demonstrate (to be sure trunk is big enough to hold his wife) ... Carlos gets in -- at that moment a gray kitten appears on the scene (just a stray cat that walked in through the window). At the sight of the cat, Carlos and Vera becomes panicky -- Vera lets go of the lid and Carlos becomes the victim of his own plot... 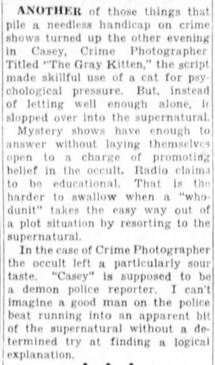 Gray or grey? This episode usually circulates as "grey," but all of the documentation and newspaper clips use "gray." So I looked it up... "gray" was the typical US spelling of the word, with "grey" used elsewhere. My sense of it is that "grey" has increased in usage in recent years.
https://www.grammarly.com/blog/gray-grey/