Surprising Corpse is not one of the top episodes, but it is good basic Casey. There are two copies of the recording provided. The recordings of this have never been the best with some background noise and generally muddy sound. I have tried to fix it.

The opening A-H skit involves Tony Marvin prepping his voice to sing. He did receive formal voice training early in his career and was in some small musicals at that time.

Count Leon de Gastone is murdered -- just a few episodes back we had a story about a Duke who was actually a Count in Duke of Skid Row. Leon is yet another character in a Casey story without a line of dialogue.

Funny stuff and their approximate times:
13:20 Ethelbert tells Grace to look at a woman ... we have no clue why. Grace has no line... yet.
13:58 Ethelbert starts to say "Hey, Walter..." and before he has a chance to finish the thought, Casey yells "bring up some more lemons." It's a running joke by now. Walter has no line in response.
25:30 Ann is jealous of the congratulatory kiss Casey gives to Mrs. Zaybelle; this is highlighted in the CBS press release headline in a nice play on words (see below)
28:00 Ann notices Ethelbert has lipstick on his lip... and then Grace says good night as she's walking out the door. Grace is probably a doubling by an actor in the main story.

ADC Notes (note that the summary differs in the name of the victim in the story; it was changed from Claude to Leon, which means that Cole's summary was typed before the broadcast)

Casey and Ann find themselves in the glittering setting of cafe society, to solve the case of "The Surprising Corpse." Involved are such people as Paula Durfee, a shallow and glamorous heiress; Clement Durfee, her uncle who controls the purse-strings until Paula reaches her 21st birthday, in another year. Claude deGastone, whom Paula wants to marry but whom Clement suspects of being a fortune-hunter; Mrs. Zaybelle, who conducts a mysterious business... Claude deGastone is found murdered. Paula had quarreled bitterly with him just before his death. Paula tells an amazing story to prove she is innocent - she and deGastone had plotted to make it appear he had been killed, to have an "eyewitness" accuse Paula before her Uncle Clement, and then to have the Uncle pay the eyewitness $100,000 for silence. With this money Paula and deGastone planned to be married, without waiting for her inheritance. She insists she knows nothing about the actual murder. Casey is the only person who believes her story - he begins his own investigation, which takes him into the mysterious and dangerous byways of Mrs. Zaybelle's world. In the end, he is able to name the real killer .. and frees Paula.

Part of the conclusion of the case requires shutting off a car, pulling the keys out of the ignition, and then bringing the car to a stop, something that can't be done with today's cars.

Casey 47-01-16 168 The Surprising Corpse UPGRADE-2
This is my attempt to improve listenability. It still has defects from the original disc.
Degoo https://cloud.degoo.com/e/drive-zp1nz9v2et0f
hubiC http://ovh.to/veY7Ei1 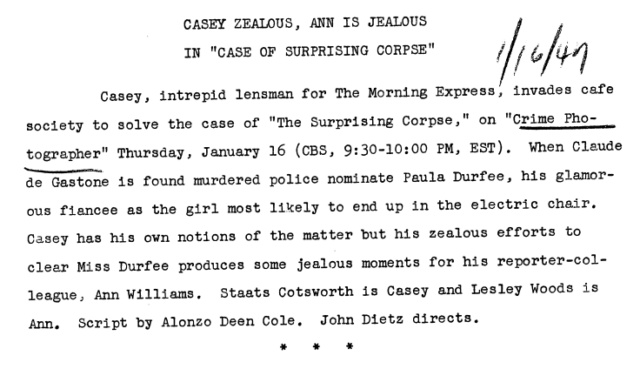 Cotsworth was a very thoughtful practitioner, and he was often
asked to opine about acting, and especially acting on radio.
1947-01-17 Newport News VA Daily Press 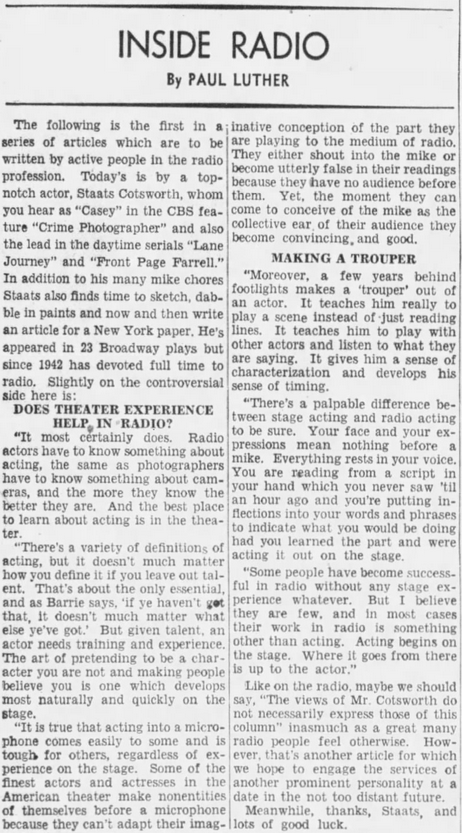 1947-01-19 Sioux City IA Journal
Lesley Woods was certainly getting a lot of publicity from the Casey series,
but her tenure would be ending soon, in just two months from this news item. 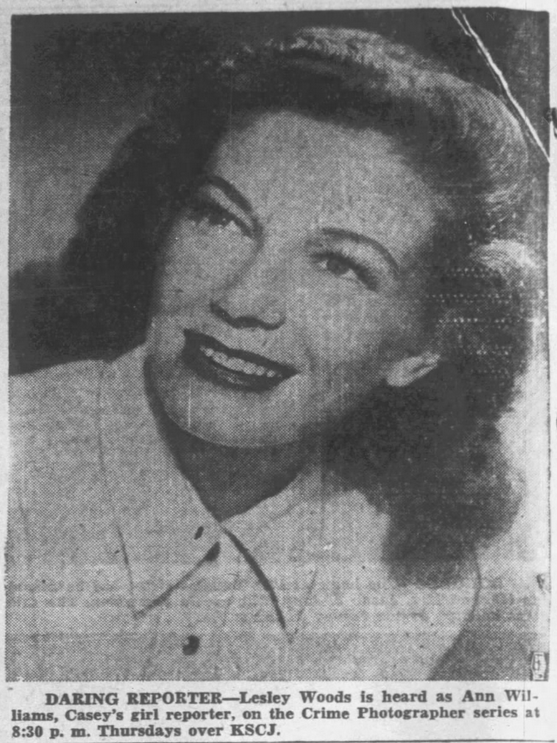