For many of the hobby's early years, Pick-Up was the last of the circulating A-H episodes. The next circulating available show was Holiday of November 1948, under Toni's sponsorship. This was an 18-month gap in the series for the circulating shows.

This episode is a basic Casey with the odd situation of never engaging the criminals in any dialogue that solves or explains the case in the body of the program.

If you want to hear the studio audience in the background, this is a good episode for it. Cotsworth never really liked them. Listening today, more than 70 years later, makes radio seem all the more intimate a medium. While the “willful suspension of disbelief” is always cited as being important for drama, and especially for radio, for some reason the idea of knowing there is a studio audience for a drama like Casey does not really seem to take away from it. There are far too many radio programs where we can imagine them as a bunch of actors standing around microphones, but this is a richer experience. At worst, you're eavesdropping on a theatrical play. Cotsworth and others in the cast are such pros that the occasional reminder that they are in a studio is less of a distraction than it might be with other shows.

Casey is walking along a street at night when he is accosted by a girl who is a stranger to him. She introduces herself as Edith Landal and tells Casey she knows who murdered Cass Marlin, the jockey who had been found dead two weeks before – just when he was scheduled to ride the favorite in the Alderstone Trophy Race. The girl asks for payment for the information and she and Casey are haggling about the price when suddenly she sees a man (who is later identified as Denver Lane) who causes her to turn pale in terror. She leaves Casey at once but first makes a date to meet him later that night. The scene switches to Casey’s office. One of his colleagues comes in to say it’s begun to rain, and asks if he may borrow Casey’s raincoat and car. Casey agrees. Later, Edith Landal and the man who borrowed Casey’s coat are both found murdered. It is apparent that the man was mistaken for Casey. When a second attempt is made on Casey’s life, he traps the killer and uncovers the answers to a few puzzling questions – What had Edith Landal been about to tell him? What part did Denver Lane play in the murders and why Casey himself had been marked as one of the victims?


5:25 There's a light but audible chuckle in the audience with the characterization of a waiter. It sounds like a double being performed by one of the other actors, which always got a giggle out of audiences if they had never seen doubling being done.

8:10 There's another chuckling in the audience when Casey makes a comment about his editor.


21:06 "Nuts to you" is used by Casey and Logan to each other when their scheme to identify the killer does not work. No one really knows the origin of the expression. It means "drop dead" or "get lost." Casey had the same wish to Ethelbert in the prior episode. It was a common expression at the time, though not the nicest sentiment.

24:10 Casey is shot, just after he gets an inspiration for the solution of the case. The way Ann seems upset offers a glimmer of her underlying affection for Casey, but he does not reflect the same emotion as Cole uses the old Mark Twain line about "the report of his death being greatly exaggerated." Cotsworth makes Casey's reaction a little too normal -- he's just been shot so it's a little hard to accept it the way Cotsworth plays it. The ending of the body of the drama does not have one of those scenes when Casey confronts the perpetrator; he just says his name and some excited words about his motive. We hear about the full solution when the gang reconvenes at the Blue Note following the last commercial. Normally the ending scene affirms the conclusion with facts and ties up any loose ends that embellish it or loose ends of sub-plots. This ending explains what happened in the final scene before the ending commercial.

There's still no on-air credit for Lenrow as Logan. It is possible his gig as "Geoffrey Barnes" on Molle may have limited him in receiving credits on other programs as part of his contract. That's the only reason I can think of. 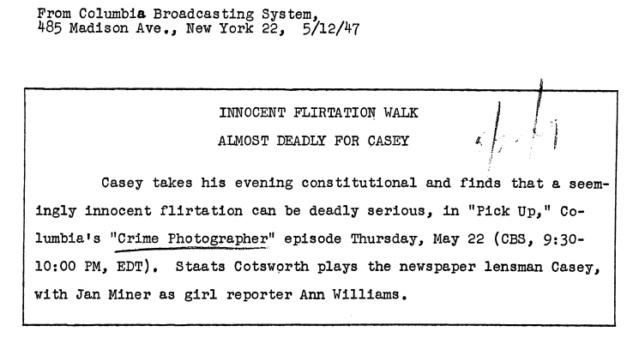 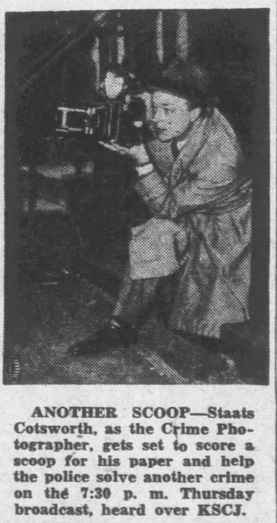 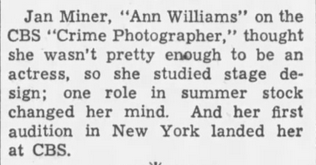