The Demon Miner has a slightly different feel than the others, and there's good reason. As related by Siegel & Cox (p.78), the script was initially submitted as a Shadow episode in October of 1943. It was called The Knocker of Tolliver Level. Because it involved a murder in a coal mine, Blue Coal rejected it. Four years later, Cole reworked the script into The Demon Miner for Casey. One can easily imagine it as a Shadow episode as it does follow the Shadow formula of a deranged murderer and the helpless heroine rescued by the leading character who seems to come out of nowhere to save the day. Think of Casey as Lamont and Ann as Margot and you can get a sense of how it might have played.

Cole would recycle plots from Witch's Tale for other episodes, one of which is coming up soon. In the process of reconfiguring scripts, key elements, like the Shadow's invisibility or the usual interrogation of a suspect by someone they cannot see have to be reworked to be the format of the new program. It's well done here, but once you know it's a Shadow script you can detect situations where the action or dialogue fits that usual pattern.

This is in my top five Casey shows. By the time we're done, there may be twelve episodes that I say are in the top five. But so far it's Christmas Shopping and this one. The music is especially effective in creating mood and transitioning between scenes, better than other episodes. Perhaps the dark and dank caves gave them something more interesting to do.

Casey is asked by Bill Jerome, newly appointed superintendent in the Driscol level if Slakeville Colliery, to investigate the deaths of seven miners. After questioning a few miners who were on the scene, he finds them half believing the superstitious belief of a Demon Miner with a white face and super human strength, and half accusing each other of murder. Calling them all together, Casey pretends to find a leading clue, which smokes out the murderer but not before he makes off with Anne Williams and tries to murder her also. The murderer is caught in the nick of time by Casey and turns out to be one of the miners who mind is warped by forever being called weak minded and a guy without guts and by killing the miners his power is felt by all.

A "colliery" is a coal mine and its associated buildings.

There is no town named Slakeville that I could find. If Casey has a New York location, this would likely be Pennsylvania, within reasonable driving distance for the paper to justify sending a reporter and a photographer.

I believe this is the first or second episode that I ever listened to of the series as a young, sixteen-year-old OTR collector. Had I listened to one of the substandard episodes, such as Great Grandfather's Rent Receipt, it's likely I would never have developed an affection or interest in the series. It's a reminder that when you're sharing OTR with others, be selective about your initial programs you give them.

This is the last episode with Lesley Woods as Ann Williams. Woods portrayal is my personal preferred one.

One of the commercials for A-H is about preparing foods for Lent. It made me wonder when ads for such periods of the religious observance stopped being mentioned on the air.

2:25 The word "hoodoo" is used, an uncommon word today. Here's Cole's familiarity with terms from his Witch's Tale days. A "hoodoo" in this context is a person or thing that brings or causes bad luck. Hoodoo is also an occult spirituality practice from West Africa.

2:35 Lenrow doubles as miner “Ol' Gus”... but not really, because Logan's not in this episode! He may have had a weekly contract or they just assigned him the part and told him he had an easy week.

3:02 "Knocker" is another word for "poltergeist"

8:20 The cackle of the Demon Miner is first heard. It is quite Shadow-esque.

Ted Osborne, who played Eddie, was the original "Man in Black" for Suspense. 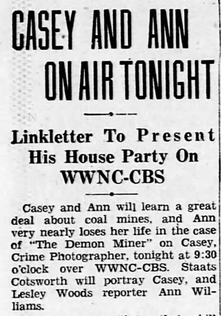