This is the second episode, chronologically, of what's circulating and the first with Cotsworth. The series is called "Casey, Press Photographer" by this time, but newspaper listings for the series still have the name as "Flashgun Casey"!

At the beginning of the show, Staats Cotsworth as Casey says "Face the camera, please... hold it!... look for it in the Morning Express!" A similar opening would be used in the series revival in the mid-1950s. Cotsworth has a line in this episode where he snaps a picture and says "Look for it in the Morning Express!" I think the writers were trying to get that line into the public's vocabulary. It must not have worked because it's not common later.

The show had not yet hit its stride, but the right actors, Cotsworth in the lead and John Gibson as Ethelbert, were finally in place. The smug characterization of Casey is already gone.

There's some scratchiness in the recording, and it's not in the most robust sound.

The premise of the mystery's solution is rather preposterous, with a disguise that is so very good that absolutely no one figures it out over more than a decade of wearing it, and faked identities, and ultimately the faked photograph. This is the 1940s, for goshsakes, and professional high budget movie makeup wasn't even that good. The elements of the scam are planted early, notably that a movie studio building was owned by the perpetrator so a staged photo can be taken. Casey is suspicious about the whole thing but there's really no justification for it. We're just supposed to believe that his years of working the news beat and have given him an instinct for these things and we're just supposed to ride along with it. We're all dopes in the listening audience. I know I said we should look at Casey as a comic book, but this is too much in this regard.

There is a running gag of Ethelbert reading "The Five Little Peppers," thinking it's a gardening book. It was a children's series started in the late 1800s. There is a Wikipedia entry http://en.wikipedia.org/wiki/Five_Little_Peppers Ethelbert's sister Edna is mentioned, also a running gag how Ethelbert takes advice from her.

The joke about the book Decline and Fall of the Roman Empire and Ethelbert's surprise at it having been published already is a reference to Italy in WW2 and the Allies making progress there in the weeks before this episode.

This episode uses an organ for its bridge music, and by comparing episodes with orchestras that would be in the Anchor-Hocking series, it's pretty clear that the director had a much wider choice of methods to create the mood required for the series -- this sounds more like soap opera than a big network program.

Ernie the piano player has a big role in helping Casey figure out the mystery. There is no clue who the actor is. It could just be a studio pianist with an actor speaking in dialect. We don't know if it's Chittison. At this time, Chittison had a 15 minute music program on CBS in the evenings, but there's no mention of him in the cast until the Fall. I suspect it's a musician and an actor in this episode.

It sounds like Jackson Beck as the villain of the story. It is most likely that Ann Williams is played by Jone Allison. Waitress Gracie appears for one line, probably doubled by someone in the cast, another source of regular gags about Ethelbert and a possible relationship between them.

It's “Lt. Logan” here in the story, and he is mentioned but does not appear.

Charles Holden wrote this episode. He also wrote for Grand Central Station and I found a citation in a copyright listing he was identified as writer of a script for the show Grand Hotel in 1945. There was a CBS and ABC executive for production mentioned in Google searches of Billboard magazine, but it is not clear if it is the same person.

Alonzo Deen Cole was the main writer of this series, but there is no episode in circulation written by him until the next one that will be posted.

1943-08-13 Hazelton PA Plain Speaker
Photo with Jim Backus as Casey. That didn't last long. The last newspaper reference I can find to him in the role is August 19. 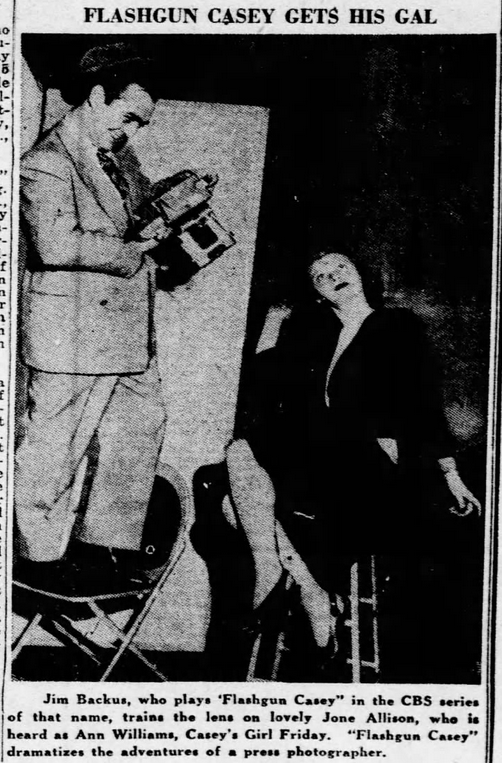 1944-03-17 Hazelton PA Plain Speaker
Jone Allison is shown here as Ann Williams, so she was still in the part at the time of this episode.
Lesley Woods is in the picture array, and she would later become, in my opinion, the best Ann Williams actress of the series. 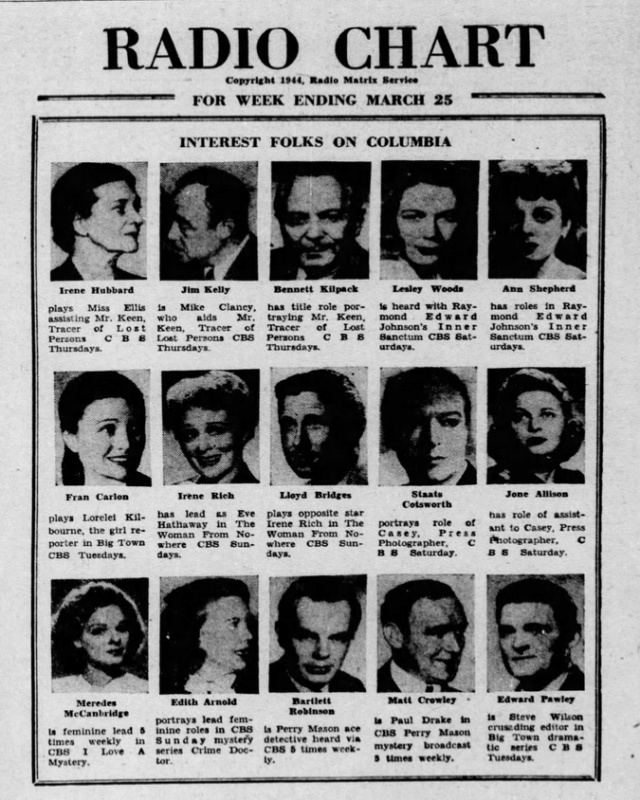