Red Raincoat is the first Anchor-Hocking sponsored episode in circulation. It has a full orchestra, and Tony Marvin replaces Bob Hite as the announcer. Marvin was the announcer on Hobby Lobby, the program sponsored by Anchor Hocking prior to them switching to Casey. They were probably satisfied with Marvin's work on that program, and keeping him maintained a continuity with the brand.
https://en.wikipedia.org/wiki/Tony_Marvin

This is an Alonzo Deen Cole script, and uses a favorite mystery story theme of mistaken identity... whether it was an accidental mistake or whether someone purposely created the circumstance for it to happen. It's an enjoyable episode with nothing really remarkable to note.

There is a production difference... the episode begins with a narrator, likely a doubling performer in the drama cast. In future episodes, Marvin would set the stage more briefly than done here as the series settled into a pattern.

It is interesting that the show's main characters are introduced in dialogue with a bit more detail as the show's new time and the greater publicity from sponsorship garnered an audience of new listeners.

The relationship with Logan is improbable... no police captain would have the many interactions with a news photographer, nor would they be such a buffoon. Throughout the series, you wonder how Logan could even keep his job! He's always making mistakes, and he must not have much time for other cases. But we accept the relationship and its improbability, and enjoy it.


A woman wearing a red rain coat is killed in front of her apartment. While Casey and Logan are investigating, Mrs. Ida Patch (one of the neighbors) appears and identifies the dead woman as Nora Gelhorn because of the rain coat. She accuses Mrs. Gelhorn's husband of the murder because of his attachment to another woman in the same apartment. But after seeing the dead woman, Mrs. Patch exclaims that she is Emma Randall, the other woman. Mrs. Patch saw Mr. Randall in his apartment from from her window across the court when she heard the shooting. Mrs. Gelhorn was in the restaurant, where she and Mrs. Randall worked, at the time of the murder. She had lent Mrs. Randall her raincoat. The detectives arrive with Mr. Gelhorn, whom they found coming out of the fourth avenue Theatre. His wife had told them he was at the movies in the neighborhood, but not at the Fourth Avenue Theatre, as he had seen that picture the previous evening. Gelhorn is arrested. Casey suspects Mr. Randall because of photographs of his room which show 2 pillows tossed carelessly on the bed. He thinks Mrs. Patch really saw a dummy rigged up to fool her. Casey decides to pay Randall another call and finds Mrs. Gelhorn there. When Mrs. Gelhorn threatens to kill Casey and Ann, Casey points to the open window where Mrs. Patch is snooping as usual.


So there! We have the Casey equivalent of Rear Window.

"With prices mounting everywhere..." is mentioned in the first Anchor-Hocking commercial. The consumer price index rose in 1946 to more than 8%. Most of us in Cobalt Club can remember when inflation was that level in the late 1970s. A-H would make thrift one of its key selling points and emphasize its reliability, so you would save money in the long run with their products. 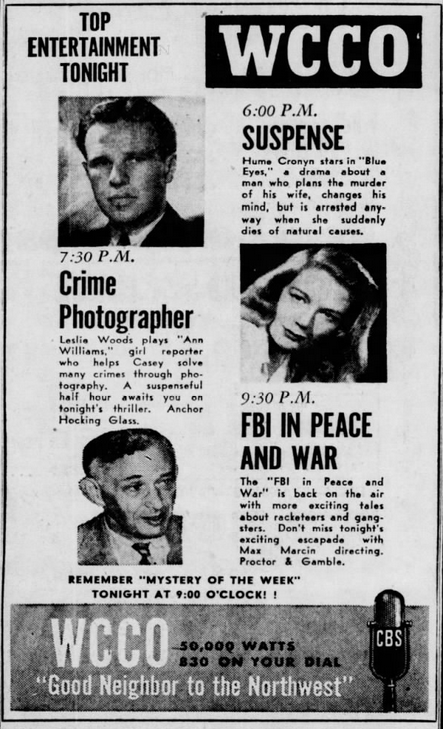