The Case of the Blonde Lipstick is written by Milton Kramer. This is the first of two weeks with scripts not authored by Cole, likely on vacation. This is a good episode except for a rushed ending. There is a little twist that none of the lead characters are in the final scene of the drama when the criminals are caught by police.

This is one of the few Casey episodes with a title that begins with "The Case of..."

These notes must have been written before broadcast into Cole's documentation. His notes mention the Damon Runyon Memorial Cancer Fund but by the time of broadcast, the charity is genericized to become "the city welfare fund."

There was a fever to raise money at this time for cancer research after Runyon's death in December 1946. The catalyst for the founding of the Fund was Walter Winchell. His efforts went toward the formalizing of the charity into the Fund. It led to another part of broadcasting history, with the first telethon. It was hosted by Milton Berle in 1949.
https://www.damonrunyon.org/
https://www.damonrunyon.org/our-strategy/our-history

Someone at CBS or A-H was likely concerned about the idea of playing up the Fund, and quashed it. I've seen decisions like this before in organizations. What they do for one charity, they might have to do for another, and do not want to be in the business of choosing one disease over another. There was also a sense among many that the best way to offer charity is to do so in private. In this case, they were using the body of the program to support a charity. The Fund effort likely included contributions from CBS already. The support of charities was different than supporting the war effort or veterans, or organizations popular at the time such as Boy Scouts and Girl Scouts which was accepted more generally. Charities would usually find their support in public service messaging or special programs that were outside the body of sponsored programs. The Casey series under A-H sponsorship almost always mentions support of a charitable cause at the end of each program. At the end of this episode, for example, there is a message about saving food to relieve hunger in war-recovering Europe.  The Runyon Fund had a big and successful year in 1947 with much high-profile support from the movie industry and its stars, and many events around the country. The editorial change in this episode could have occurred for many reasons, and the Fund's great success may have been viewed as jumping aboard a bandwagon when other charities needed support, too.

Casey and Ann Williams are involved in a swindle, an income tax evasion, an attempted murder and the Damon Runyon Memorial Cancer Fund in this episode. A beautiful young blonde, Laura Neely, approaches Casey and tells him that she's working for the Damon Runyon Cancer Fund every evening after work. If Casey will publicize her, she tells him, it would make her job of collecting money for the Cancer Fund much easier. Casey agrees, and the young lady goes off on her errand of mercy. Laura's boss, Thomas Stevens, calls Casey to tell him that after collecting $10,000 from noted citizens of the town, Laura Neely has disappeared. Casey finds that Laura has bought a brand new convertible, several fur coats and hundreds of dollars worth of clothing. Angry at being duped into being the frontman for a swindler, Casey goes out to look for the blonde but she has disappeared completely. Then a lipstick case and the odor of a strange perfume puts Ann Williams' feminine intuition to work and together with the State Troopers, Casey and Ann stop a swindle, an income tax evasion and an attempted murder.


Which is correct? "Blond" or "Blonde"? Traditionally, "blonde" refers to women, "blond" for men. The reason is that the word originates in French where words have genders and different endings. "Blond" is gradually becoming standard in the US. One of the reasons is that "blonde" has negative connotations such as "dumb blonde."

Despite the change in plot details, the story title may still have a tie to Damon Runyon. In 1927, Runyon was a nationally-known syndicated crime reporter. His accounts of the murder trial of Ruth Snyder and Judd Gray in an insurance scam became a book, Eternal Blonde, with "blonde" being used to imply lack of intelligence. The Snyder-Gray story also became the inspiration for the film Double Indemnity. https://robertarood.wordpress.com/category/true-crime-narratives/  This work of Runyon was well-regarded and well-known at the time, and Kramer (or someone else) may have created the show title when the script still had its planned tie-in with the Runyon Fund.

Not much is known about Milton Kramer. It is a common name and hard to search in online data bases. We do know that he wrote for early 1940s comics (Crime Does Not Pay being one of them) and also some episodes of Counterspy, Famous Jury Trials, Nick Carter. Few recordings of his radio work survive. http://www.radiogoldindex.com/cgi-local/p4.cgi?ArtistName=Kramer,%20Milton&ArtistNumber=36984

5:33 Neely says she is working for the city welfare fund. This eventually leads to Casey helping the cause by taking pictures of prominent locals making contributions. Ann is skeptical of her motives.

7:31 We learn that Laura left Thomas Stevens office with over $10,000 in cash to deposit in the bank. That's $120,000 in today's 2020 value. Cole loves throwing big dollar figures around... and this Kramer script follows the same pattern. Did Cole edit Kramer's script? Did they discuss show style and detailed aspects of continuity such as the inflation of dollar amounts?

8:45 We're in Boston, not New York as Ann tells Casey to "check the Boston railroad terminals" for the whereabouts of Laura Neely. The nebulous locale of the Casey radio character continues...

15:00 A disgusted Casey become skeptical about the lack of clues that support a larceny scheme and that something else happened to her. He decides to visit Stevens.

16:23 Ann comments about the portrait of Stevens' wife and that she is a beautiful woman. This information is important as his wife was making purchases disguised as Laura to frame her.

18:28 Ann finds the lipstick -- and that it would match Laura's hair coloring but not that of Mrs. Stevens in the picture. This proves that Laura was in the Stevens home at some time. "When something is true, you don't need reason" is what she tells Casey as justifying her assumption it was Laura's lipstick.

21:41 Casey visits Stevens' home again claiming to look for his film case and notices that Stevens has a packed bag ready to travel.

22:15 They realize that the residual fragrance of Laura's perfume is in the couch, and that Laura was must have been there.

22:35 Casey has an idea of what's going on, and to prove his theory about the case he has to prepare a "speech for a tough guy" and then "buy a can of paint." The plot makes a rushed leap forward from here to the conclusion. The amount of time needed for Casey to implement his plan seems like it could take a few hours to do, including coordinating with the police, making it seem implausible for the conclusion to work out as it does. This is another reminder that Casey is a audio comic book, so all things are possible.

22:55 The the final steps of Stevens' nefarious scheme to kidnap and eventually kill Laura plays out. Paula has kept a drugged and bound Laura at their out-of-town summer cabin. We learn that the Stevens are covering up their income tax evasion! Laura had seen the Stevens business books and knew what was going on. Suddenly, the police barge in and arrest him and his co-conspirator before they can kill Laura. Interesting... Casey and Logan are not part of the scene. Listeners have no clue how these events happened until the Blue Note epilogue.

26:15 Laura joins the group at the Blue Note to thank Casey. Happy to be alive, she says to Casey "I could kiss you" and a somewhat jealous Ann says "I was just getting ready to like you." Kramer keeps up the mild romantic tension between Casey and Ann. When Casey said "prepare a speech for a tough guy" he got Burke to authorize use of the Morning Express news plane. The can of paint was to mark the top of Stevens' car to tail him to the cabin without him realizing it. The police got to the cabin because Casey called them via two-way radio from the plane. We have to assume that Casey arranged it with Logan beforehand; the police stepped into the scene much too quickly for it not to be coordinated. It is strange how police are always available on a "drop everything and do this instead" basis.

Note the inconsistencies of "blonde" and "blond" in the newspaper clippings. Different editors were of different minds as to which spelling was correct. 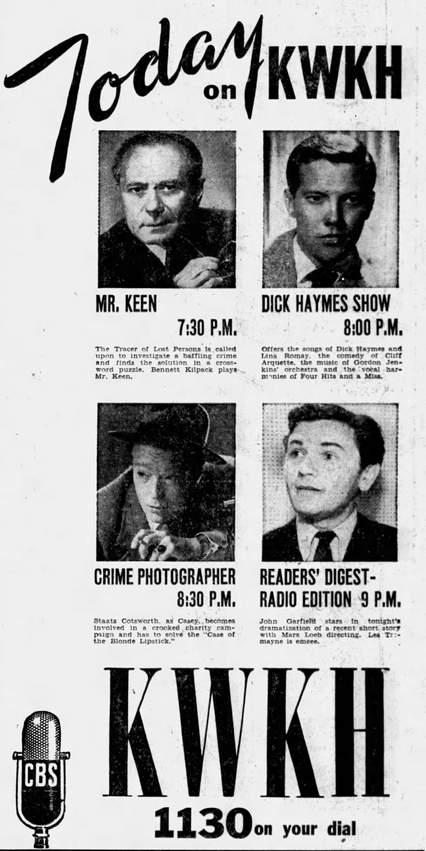