Loaded Dice is a poorly executed episode from a production standpoint. The performance sounds a lot like people standing around  a microphone presenting a script that is very pedestrian, with nothing compelling to draw the listener into the story. What makes it all the more disappointing is that they had an extra couple of weeks to work the kinks out of the script and the technical aspects of production since it was postponed for Cotsworth's absence two weeks prior. One of the reasons for the problem is the show's use of a new performance and audio capture technique, detailed in a CBS press release.

Casey receives a phone call from Steve Drake, a professional gambler. Drake is greatly perturbed and in response to his urgent request, Casey goes to his apartment. There, on the floor of his living room, Drake points to a blood-stained knife which he says he discovered after being awakened suddenly by a sound he thinks was made by the close of his apartment door. They enter the adjoining apartment where they find the body of its tenant, Foster Blassett, a wealthy playboy, slumped in front of his door. He has been stabbed to death. Drake and Blassett not been on good terms, and the former sees a frame-up in the circumstances - a viewpoint that is not shared by the police whom Casey quickly calls in. Drake is charged with murder and even Casey is half-convinced that the gambler brought him into the case to establish an appearance of innocence that is not warranted by the apparent facts. The police search Blassett's apartment and find loaded dice. At first, the dice seem to link Drake even more securely to the murder. But Casey takes the trouble to learn that Blassett has won rather heavily in a dice game run by another gambler - not Drake. Following an exciting danger-packed trail of loaded dice, Casey finds the real killer.


1:56 The phone call filter does not seem to be working correctly when Drake calls Casey. Did someone flip the wrong switch on the control board?

7:37 Casey kids Logan that he's been on hold for a half hour when it's just been minutes. They're used to razzing each other and probably miss it if they can't do it.

16:40 The lab reports to Logan that the dice were loaded! They're a really bad set because they are too consistent in delivering the desired numbers, making them easily detectable.

"Stickman" is one of the key people in a craps game. Casey thinks the bad loaded dice could only work if the "stickman" was in on the scheme. Learn about it all at the Wikipedia page https://en.wikipedia.org/wiki/Craps

22:28 Doesn't Everett walk just a little too calmly into the room where Parker was just murdered in front of Casey, Logan, and Ann? The scene and the identification of the solution just doesn't work.

These three clips are for the original planned broadcast date... 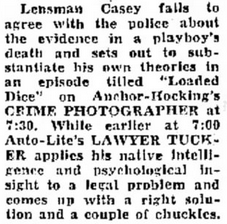 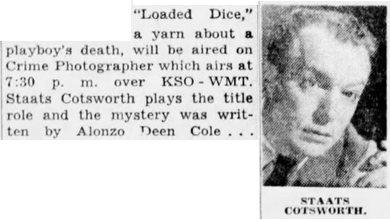 These two are for the actual broadcast date...

The issues with this broadcast could be the production team struggling with a new technique of capturing the audio. If you've ever wondered why some Casey shows sound "echo-y" or like they're being done in a theater, this is why. Loaded Dice may be the first episode where it is used as it has some of these characteristics... and the opening phone call to Casey from Drake may be the first tip-off that something is quite different. Eventually, they seem to get it right, and the Casey program starts having a unique sound, but I don't think the technique was broadly adopted. Below is a November 1947 press release that reports a timeline that would include this broadcast. 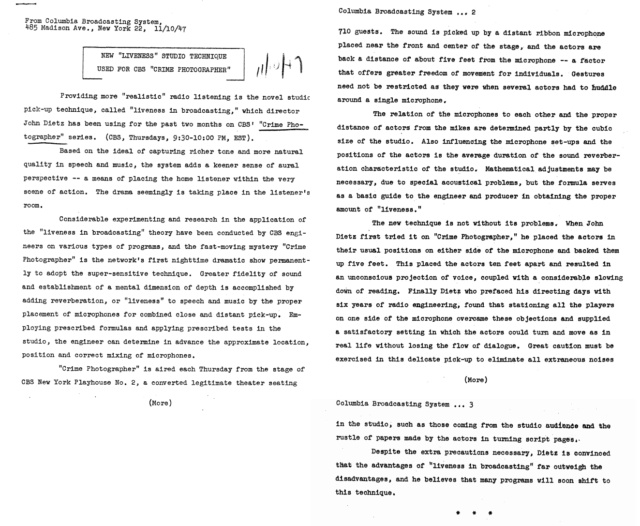