Treasure Cave has circulated under different names over the years, such as "The Treasure Cave" and also as "Treasure Cove." It's definitely "Treasure Cave." Last time Casey was underground was for the Demon Miner episode. Mines, of course, are planned man-made "caves," while Treasure Cave is a natural formation. Nefarious things can happen in either situation. This is an average Casey episode of its time with some stereotypes in characterization and dialogue that would not be used today. The underlying plotline is typical but a little complicated, hence I have more notes. The story is built around trying to inherit an asset so it can be exploited in a different manner than if someone else inherited it, especially if someone else purchased it before it could be inherited. Treasure Cave promises to be a more exciting story than it turns out to be.

Casey is assigned to investigate a natural cave which is haunted and in which several mysterious deaths have occurred. According to legend, pirate treasure is hidden in the cave under the care of ghostly guardians who strike down too curious explorers in a vaulted chamber called "The Spirit's Temple." The last man who died there, a local archeologist, was apparently drowned -- yet the spirit's chamber in which he is found is far removed from water. A previous victim, according to the evidence, was killed by an ancient seaman's cutlass. "Treasure Cave," a comparatively small cavern eroded and ruined by the sea, lacks the attraction of such beautiful river-created caverns as Luray Mannough [see note below] and Carlsbad, so it is not a mecca for tourists. It is situated on property owned by a retired broker, Basil Lefton, and supervised by Donald Ramsey, recently an Army Sergeant. The guide who conducts Casey and Ann Williams thru the "Treasure Cave" is a superstitious oldster known as "Injun Sam." Casey and Ann do not find their investigation of "Treasure Cave" a pleasant task. Luminous eyes glare at them from the darkness; leering dead men try to block their way and the true spirit of "Treasure Cave" makes its appearance. With mounting tension, the eerie drama moves swiftly to its unexpected climax.

"Injun" was an acceptable word in the era of the broadcast, but is considered to be an insult nowadays.

1:50 Casey and Logan are going up to Red Lake to fish since their days off match up. Hearkening back to the episode where Ethelbert said he did not get past McGuffy's Fourth Reader, so he mentions that Jonah was the fisherman who caught a whale and the whale's name was "Moby Dick." Logan gets upset when he realizes the trip will include Casey and Ann working on the murders in Treasure Cave.

4:56 Logan describes a key detail of the murders: they were being done using ancient weapons from the pirate era. Cole also used the ancient weapon idea in Mysterious Lodger of just a few weeks ago.

6:07 Logan says he can't get mixed up in the case because it's out of his jurisdiction, but he will go along as long as his professional position is not mentioned when they are there. Casey has great fun in the episode describing to others why Logan is along, usually making it some subservient position.

7:26 Ann complains how Casey and Logan extend "no fish" into an hour long discussion. This sets up the closing comment by Logan at the conclusion of the body of the story.

8:19 Ida Leftin introduces herself, and she introduces them to her brother as "the newspaper people." Her brother doesn't seem pleased. When Casey introduces Logan, the script purposely has him start saying "Captain" and catching himself in mid-word.

10:13 The land that included Treasure Cave is not for sale, but a bidder keeps upping the offer. Cole reveals a key part of the mystery. Leftin says the victims had nothing in common, and Casey says the permission they got from Leftin to see the cave is what they have in common -- Cole plants a seed for an upcoming scene.

14:35 Injun Sam is described as a big, muscular man, who once killed someone but was pardoned. Cole sends audience enough information for Sam as a possible suspect.

15:00 Logan says hello to Sam by saying "How." This is a stereotypical Indian greeting, with limited historical and geographic basis for its actual use. It was popularized by novels by James Fenimore Cooper and, of course, in movies https://en.wikipedia.org/wiki/How_(greeting)  Sam is also played here as a grunting, low vocabulary, laconic character. That would not play well today.

17:49 They reach the "Spirit's Temple." To get the drowned victim there, Logan says the murderer must have been big and strong to carry the body, another reason to cast suspicion on Sam because there was no place with water for someone to drown in. Sam says the spirit can make water appear, which Logan does not believe. The path they took to the cave was too narrow for a big person to use, which means that Sam could not have done it... unless there was a different passage. This is Cole's first hint that there may be another entry.

19:50 They stumble on yet another body, with an arrow through its throat. It's the Sheriff! It's an "old Indian arrow" according to Injun Sam. Did the killer an arrow to implicate Sam? Did Sam "discover" the body to appear innocent?

21:15 Casey, Ann, and Logan decide to return to visit Leftin, realizing that every person who was murdered received his permission to go into the cave. As they ride in the boat with Ramsey, he says that he took all of the murdered to the cave and turned them over to Injun Sam. Does Ramsey want them to think Sam is the murderer? When they talk to Sam, he denies it, and says they wanted to be alone (22:30) but he gave them lanterns. Casey asks for the same.

23:30 Ida surprises them. Cole announced the presence of the gun by having Casey say "You're armed with a very modern weapon this time, Miss Leftin." It turns out there is a secret passage near the Leftin house that goes into the cave. She brought a gun this time because she may have to kill Casey, Ann, and Logan, but admits to the other murders.

24:30 Ida wants to turn the cave into a tourist attraction, so she has been thwarting the interests of those who want to sell or own the cave by killing them or by convincing others that the cave is cursed.

25:08 After the Casey, Ann, and Logan subdue Ida, together, in mid-explanation and confession, Logan says "When a woman starts to talk, you just gotta stop her." Did he really say that? In 1947, he did! When he did say it, Ann was holding Ida's gun. Hmmmm... I wonder if Logan would think differently about what he said

26:52 Ethelbert neglects to include Ann in the group that solved the case. Hmmmm... again. Logan makes his remark about women before the commercial break, and now Ethelbert says this! I wonder how Ann really feels about this snub! He says another mildly insulting thing at 27:25 when Ethelbert says women talk to much. Ann responds that Casey and Logan are still away "not catching fish," and since they're unsuccessful at that, all they're doing is "talking, talking, talking"! 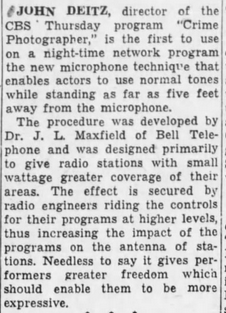