Wedding Breakfast is a simpler story than Miscarriage of Justice and not as good. ADC's continuity notes make it seem much more interesting than it actually is... and it basically ends with a theme well-known by any kid who went to school and had a dog... yes, "my dog ate my homework"... or in this case, a string of very expensive pearls. And the story ends with a tired mystery story cliche about who the perpetrator is (it was tired in 1947, 73 years ago!). Overall, it's a mediocre entry in the series, but has some small smirk-worthy moments.

Acting on a tip that the young heiress, Sylvia Loomis, has secretly married Rene DuPaville, a ladies man of dubious antecedent and reputation. Casey and Ann go to the latter's apartment on the morning after the alleged wedding, for confirmation of the story. As they approach his door, a woman whom Casey recognizes as Mrs. Fred Gardner, wife of a wealthy businessman, hastily leaves the apartment and runs down the stairs. According to gossip, Mrs. Gardner is one of the many women who has been infatuated with the handsome DuPaville. Receiving no answer when he rings the doorbell, Casey opens the unlocked door and finds the living room in wild disorder. Obviously a drinking party has taken place there. In the bedroom Casey finds the corpse of DuPaville. The man has been bludgeoned to death with a bronze statuette of Venus, Goddess of Love. Lying in the bed in a drunken stupor and with blood-stained hands is Artie Mason, a wealthy playboy who was once engaged to Sylvia. Yet the bride of a few hours is not in the apartment and from evidence found, he left it very hastily at some time during the course of the drunken orgy that was to have been her wedding breakfast. During the investigation of the murder and the incidents that lead up to it, Casey, Ann and the Homicide Bureau's Captain Logan encounter some strange and sinister characters who inhabit the hectic half-world of cafe society; and they find themselves momentarily lost in some dark and dangerous blind alleys. But at the end of this thrilling drama, they find the true surprising solution of the crime.

00:18 The show starts with comment that even though it's the anniversary of the Great Chicago Fire, no one knows the name of Mrs. O'Leary's cow, but everyone knows the name Anchor-Hocking. The previous episode included a mention of it at the close, so it is likely Cole was working on the two scripts were being worked on at the same time. Cole enjoyed history, and probably had a directory of event anniversaries that provided a quick way to come up with one of the corny A-H opening skits when pressed for time. This is still a resource that professional speakers use when preparing their speeches and presentations.

2:35 Jimmy "the Hackie" calls with a story lead for Casey. A hacker is a taxi driver. The way he says "hair-ess" for heiress is another Cole theme of common people attempting to sound sophisticated. Hacker is derived from "hackney cab," which referred to a carriage for hire drawn by a hackney, or an ordinary horse. The term dates back to middle English. Just like "car" is from "carriage," "hack" comes from "hackney."
https://en.wikipedia.org/wiki/Hackney_horse
https://en.wikipedia.org/wiki/Hackney_carriage
The word has changed over the years, and "hack" can also mean mean "writer for hire," especially if their work is not particularly outstanding, and the word "hackneyed" which means "cliche-ridden." (Remember, when you are writing, be sure to avoid cliches like the plague). In recent decades, "hacker" has come to mean a "computer nerd," especially one who knows how to bypass various aspects of programs to get them to work in an unintended manner.

3:14 Jimmy sets the stage for the episode, introducing all the characters. He says they went "over the border to Fieldston." Cole, living close to the Bronx, would have known this area, an exclusive section of the Bronx. https://en.wikipedia.org/wiki/Fieldston,_Bronx  Lou Gehrig lived in the neighborhood for his final two years, and died in this home https://www.flickr.com/photos/emilio_guerra/5650028255  I'm familiar with the area as an alumnus of Manhattan College, which borders this area. The area had an interesting way of limiting car traffic to residents only: they left the roads in disrepair and riddled with potholes... on purpose...

3:27 Jimmy's language is hilarious as he says the bride wanted to "welch on the ball-and-chain idea." Yes, that means "having second thoughts about the impending marriage."

6:00 Casey wants to enter the DuPaville apartment, and Ann says "Casey, we have no right to..." and he interrupts her "We'll take the right" because the door is open. Casey always has a sense of acting now and apologizing later, and that he can eventually get away with things because he's tight with Logan. He doesn't know it's a crime scene yet until they stumble on DuPaville's body.

9:15 Larkin wants to straighten a picture on the wall -- says he can't stand "seeing things crooked." Cole plants a clue for the solution -- there's a safe behind it, we learn later.

10:10 Waldo, the butler for DuPaville arrives. He brings dog food with him for DuPaville's spaniel. Remember this, and that dogs will sometimes eat anything. https://art-sheep.com/20-x-rays-of-weird-and-shocking-things-dogs-have-swallowed/
https://barkpost.com/discover/dogs-eat-strange-things/

16:25 Loomis and Mrs. Gardner were found. Loomis took poison and was in the hospital and can't be questioned. Gardner was being held at police headquarters for questioning. She knew about the debts, and it was her pearl necklace that was going to be used to pay the debt.

19:54 Blue Note breakfast recap of the story. Loomis learned that Gardner was with DuPaville before the wedding, so that's why she was reluctant to marry... and why she poisoned herself.

21:49 There's noise in the audience with some muffled coughing.

22:30 Larkin is at Casey's apartment because he believes Casey has the pearls (he doesn't) and he asks for money... they start a fight, and knocks out Larkin. He calls Logan to go back to the DuPaville apartment to look for the pearls.

23:48 Waldo returns to the apartment because he's concerned about the dog... Casey and Logan are already there. The cocker spaniel is dead... Waldo had poisoned him with the dog food and... the pearls! When he was told the dog would have an autopsy, he confessed. And yes... the butler did it.

If you don't think a dog would eat pearls is a crazy part of this episode, here's a story from the 1904-02-21 Philadelphia Inquirer 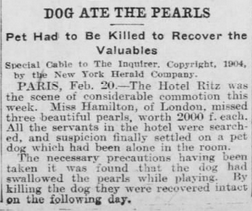 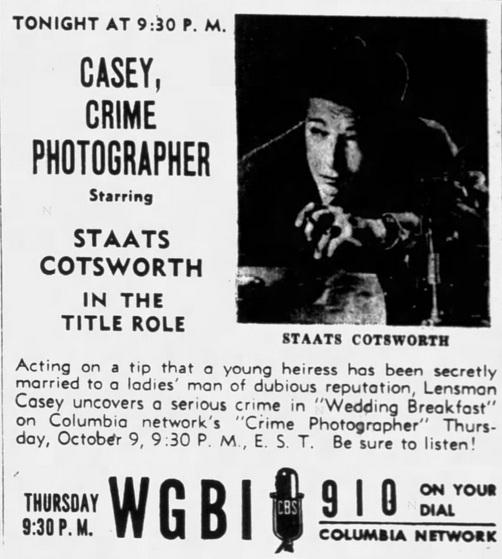 This particular wedding didn't work out as expected... but if you need a wedding gift for a happy couple, perhaps you can buy this... 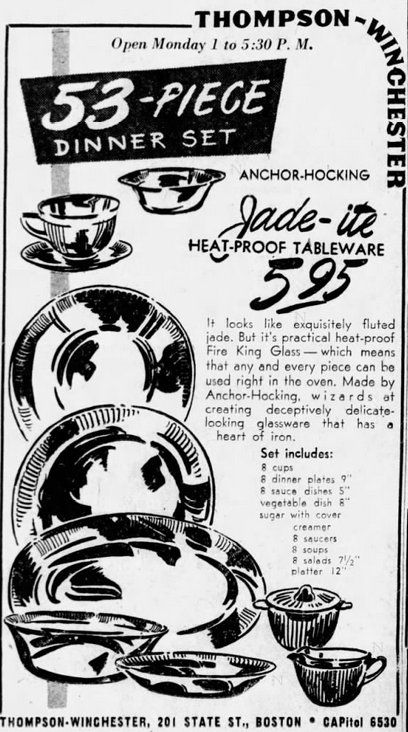