Death in Lovers Lane begins with a mention of the anniversary of Anchor-Hocking's sponsorship. Their support changed and enriched the series... but the sponsorship would not have a second anniversary. It would end less than eight months later when A-H did not realize the bump up in sales they expected for the amount of money they were paying.

There were 432 episodes, with many repeats that have yet to be detected. The A-H run is the most intact, with 54 surviving episodes, representing 62% of that part of the run. The Philip Morris run survives mainly as AFRS recordings, with 22% surviving, represented by 15 episodes. Between the Toni run and the two sustaining runs, only 11 episodes survive, meaning more than 97% of the episodes of those periods are missing. That is disappointing, but the A-H episodes are the prime cut of the series, and we are lucky to have them. (The following data are subject to revision, but are accurate based on what is known at this moment). 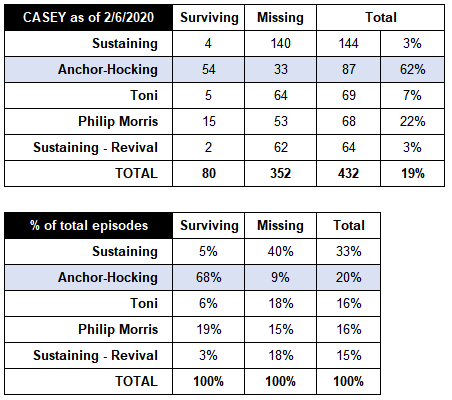 
A series of murders has been committed in Lovers Lane. They have all followed the same pattern: a man and woman, in a parked car, have been found robbed and dead,  and near them a card imprinted "I.M. Death". The police send out two detectives, a man and a woman, to pose as lovers in a parked car in lonely Lovers Lane. They are approached by a man who says he is a policeman and asks for money or be will turn them in. The real detective draws a gun, and the imposter does the same. In the ensuing exchange of shots, the real detective is wounded and the imposter escapes. The police arrive, comb the surrounding woods for the poser, believing he must be the wanted murderer, and finally find him dead. Near him is a card – "I.M. Death." Casey and Ann arrive to take part in the all-out hunt tor the murderer. They round up the people living in the vicinity of the murders. There's Old Eph, a hermit. Eph hates the world which he has renounced… A professor, Clarence Butterworth - an amateur detective and teacher of psychology -- and a Mrs. Norman Julian who has been unhappily married and might be extremely bitter about young lovers. After a series of exciting complications, Casey gets to the bottom of things and traps the real murderer.


"Eph" is pronounced "eef" in the program.

9:20 Butterworth says he teaches psychology at “Sylvester Normal.” “Normal” is barely used any more to describe schools and colleges, but the idea was to convey societal norms to those being trained to become high school teachers. The term dates back to the 1600s. Strangely, “Sylvester normal” is a concept in matrix algebra, named after 1800s mathematician James Joseph Sylvester.
https://en.wikipedia.org/wiki/Normal_school

14:22 Police believe that Eph says “I’m Death,” making him a suspect, but it sounds like he’s really saying “I’m deaf.” The problem is that he has a gun and starts shooting, which obviously increases suspicion that he is the killer.

17:35 Eph says he has nitroglycerin, which, under the right conditions, is a contact explosive. Nitro has since been replaced by more stable alternatives that are easier to handle and manage. The bottle did not explode when he threw it (it could have landed safely in some dust or plant growth, but it also could have been cold in the cave; nitro has a very high freezing point)

21:22 Casey stops in Lovers Lane with Ann. Butterworth does not realize it’s them and approaches them as the killer does. He is clearly mad, saying that you can’t understand a killer’s mind, unless you become a killer, too.

23:00 Casey threatens Butterworth with the tiny bottle of nitro and he faints. Casey doesn’t believe it’s nitro because it didn’t explode when Eph threw it.

24:30 Sirens are in the distance and it’s Logan and other cops. They’re relieved to find Casey and Ann,  and Logan tells them that the bottle was real nitroglycerin!

27:15 It turns out that Butterworth fainted because he recognized it as real nitroglycerin and not fake. Ethelbert faints and falls to the floor at the mere idea of it… and Casey calls for Walter’s help.

The theme of amateur criminology appears again, later in the series. Ethelbert studies the topic in Scene of the Crime, one of the funnier episodes of Casey.

The idea of studying criminology by living a criminal’s life was the basis of the 1937 play and successful 1938 movie The Amazing Dr. Clitterhouse, so the idea was part of the culture and easy for Cole to tap into and get the audience to accept.
https://en.wikipedia.org/wiki/The_Amazing_Dr._Clitterhouse
The movie trailer is at https://youtu.be/iQFTzPgJWjY
It was a popular radio play. There are productions of Clitterhouse in circulation from AFRS Frontline Theater, Best Plays, Studio One, and Texaco Star Theater. A Theater Guild version is missing. 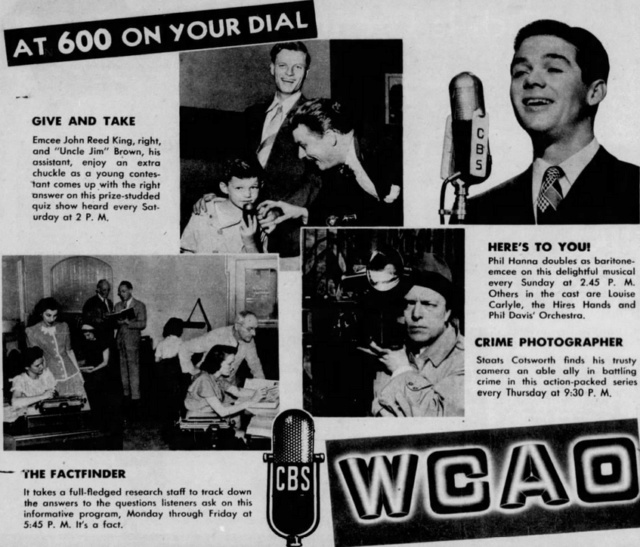