Photo of the Dead is a good-quality Casey program. Cole likes stories that have a touch of the supernatural, and this one is a little switch in that it's a scammer they're trying to catch. Psychic phenomena (and scams) were a big deal in the early 20th Century, and even captured Arthur Conan Doyle's interests as he investigated spirituality. https://en.wikipedia.org/wiki/Arthur_Conan_Doyle

Casey has known old "Dad" Phelan for years. And when -Phelan comes to Casey at his office, the lensman is completely sympathetic because he knows Phelan is still mourning for his wife,·who·died several. years ago. Phelan tells Casey that he has become interested in spiritualism, through a woman who has introduced him to a medium named Swami Theda Narsi. Narsi has produoed a "spirit photograph" of Phelan’s dead wife. The old man is happy about the photo, but wants Casey to advise him about its authenticity. Casey believes the photo has been faked, but in order not to disillusion Phelan, Casey tells him it is genuine. Casey plans to visit Narsi and denounce him for exploiting Phelan's grief. Before he can go, Casey is given an unexpected out-of-town assignment. When Casey returns to town, he finds that "Dad” Phelan has been found·dead in his gas-filled room. A bank-book shows $20 remaining from a $6,000 account. Casey is convinced that Phelan has been driven to suicide by the Swami. There is no concrete evidence·of Narsi's double-dealing, so the police are powerless·to act. But Casey, with Ann's valuable help, devises a scheme which leads to the solution of the case.


“Swami” is a term that originates with Hinduism, but the word is broadly used to describe spiritual advisors and even business experts.
https://www.merriam-webster.com/dictionary/swami

This plotline of a fleecing psychic is not new, and seems to play out the same way, no matter what series or -- ahem -- medium it is performed in. All of us have seen dramas, comedies, and other television and movie presentations that include it.

Houdini became the bane of psychics and fortune tellers. This website relates some of his more prominent exploits in this regard. https://www.thegreatharryhoudini.com/occult.html

12:55 Burke the city editor finally gets a speaking part. He supplies the background story from his family as the foundation of the scheme to catch the Swami. Ann gets to go undercover, so no one can say where she is. This seems to drive Casey a little crazy. This is a big step for the character of Ann in her career and also in terms of the character development in the series. The character is much more than window dressing.

25:00 Are we supposed to believe the fight scene? Radio fight scenes always seem so hokey, with the participants announcing their punches or pains, and justifying their actions, and claiming victory. Some are more believeable than others; this doesn't seem to be one of them.

27:25 Casey asks to go out for a walk with Ann, and seems a little nervous about doing it. Ethelbert seems befuddled, and says “so long, Ethelbert” but stops before he can finish once he realizes he’s just repeating what Casey and Ann just said. It’s not a flub. His sister Edna’s quote is “Absence makes the brain grow dumber and a walk on a nice night may be dangerous business for an unmarried bachelor.” Could something real between Casey and Ann be developing here? Or will Cole tease us so we keep listening?

This episode was supposed to be broadcast on July 17 but was replaced by Self-Made Hero. Photo of the Dead was delayed until July 24, but there were virtually no newspaper clips about the July 24 broadcast. 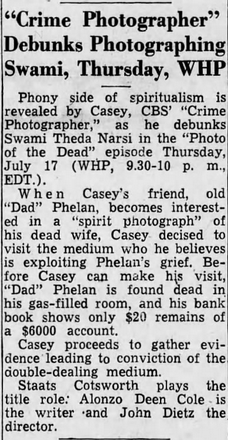 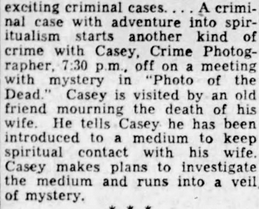 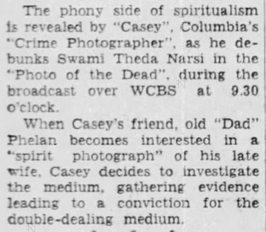