Too Many Angels is another non-Cole script, and it is an excellent effort by Albert Barker, writer for the Terry and the Pirates radio series. It is a worthwhile listen and is one of the better Casey episodes. The plot can get a little complex in terms of keeping track of the characters, but it's worth the effort to pay closer attention than for other Casey scripts.

Casey and Ann Williams are involved with a musical comedy and murder. Ethelbert, the Blue Note Cafe's number one man, tells Casey and Ann that he's the backer of a new, sure-fire musical comedy hit, "Angel Face." When Ethelbert, Ann and Casey go to attend the dress rehearsal of the show, they discover the star in her dressing room with a knife in her back. Two people are implicated: Carlos Chaplin, gangster and night club owner, and Eva Carling, understudy to the star. Chaplin has thrown off his former girlfriend and star of the show, Andrea Ballou, for Eva Carling who was promised the lead in the musical comedy by Chaplin if "anything happens to Miss Ballou." In the midst of the investigation of the murder, backstage at the theatre, a 100-lb sand bag thunders down from the catwalk high above the stage, just missing Casey. The mystery then cascades, one thrilling event after the other, until Casey finally pieces together the clues and captures the murderer.

The script is written by Albert Barker. He also wrote scripts for Don Winslow, Terry & the Pirates and other programs.
http://www.radiogoldindex.com/cgi-local/p4.cgi?ArtistName=Barker,%20Albert&ArtistNumber=00910
He did some work on Broadway http://www.playbill.com/person/albert-wineman-barker-vault-0000018064
This brief clip dates his radio scripting career as beginning in 1933. It seems he was an early proponent of "standing desks" and would be pleased to know this is very popular today with many adjustable desk products now available. 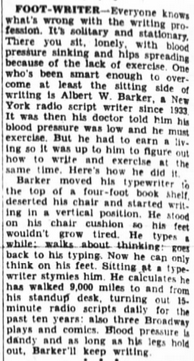 This is another case of Cole's continuity notes being entered into his document well before broadcast. A character name is changed from "Carlos Chaplin" to "Carlo Chapman" for the broadcast. It's likely because "Carlos Chaplin" was too close to "Charlie Chaplin" the legendary star of the early movie industry. Chaplin was in the news at the time because of various controversies, including personal scandals, accusations of being a Communist, and the release of Monseur Verdoux. The movie was poorly received in the US but did better in Europe. It was nominated for an Oscar for screenplay, and its reputation did improve over the years. https://en.wikipedia.org/wiki/Monsieur_Verdoux  Changing the name in the script was likely an early and easy editorial decision.

"Angels" refers to investors in Broadway plays. They usually did not make money, but often felt good about supporting the arts and getting some benefits of rubbing shoulders with the producers, actors, directors, and the production crews. The term is still used in venture funding of start-up businesses, but an "angel investor" is very early, when other investors are reluctant, and the involvement includes mentoring of the business founders and often sitting on the board of directors. In the case of this story, the angels are small investors looking for something else.

1:56 Ethelbert calls to Walter for more lemons. No answer.

2:00 Ann says she wants to go home, but her apartment was being painted, and she did not like sleeping with the odor of paint. This becomes an important part of the story's conclusion.

5:20 Ethelbert leaves the Blue Note! This is a rare occurrence... Casey, Ann, and Ethelbert arrive at the theater.

6:38 Casey tells  Ann to watch her step because of the cables and sand bags overhead -- this sets up the scene where a sand bag nearly hits Casey.

7:45 Casey makes a comment about Carling's hair-do; he refers to it later as a "cocker spaniel hair-do."

8:20 Carling calls Andrea Ballou a "double crossing microbe with a neat pad and a mink coat." (Did I hear that right?). Ethelbert asks "Don't you like her?" Writer Albert Barker seems tuned-in to the tongue-in-cheek style of the Casey series. Carling threatens to "take care of that she-devil."

13:20 Chapman identifies the murder weapon as belonging to him.

13:40 In saying what he needs in light of the blonde hair found on the body, Logan says "right now all I want is a blonde." Casey responds "that's all most men want, Logan."

14:37 The sandbag nearly falls on Casey! The cord was cut with a knife! Logan and Casey go up on the roof trying to figure out the escape route of the rope-cutter.

16:18 Casey notices the photos of dancing teams in Chapman's office. One of them is "Blue and Ballou" with Andrea Ballou and a dance partner before she became a solo performer.

16:33 Casey makes a snarky comment after Chapman says he was out for some excercise. Casey asks "up and down fire escapes?" referring to the attempt to kill him moments ago and the escape route... and suggesting it may have been Chapman who dropped the sandbag on Casey.

19:15 Carling admits to having a relationship with Chapman when she implies he has a key to the apartment in a conversation with Ann. Details are revealed later.

19:48 Casey starts to realize "Blue" is Blake, and that Blake has a limp... the scene changes but returns to his conversation at 22:22.

21:25 Blake rings Carling's bell and is finally let in. Scriptwriter Albert Barker continues in the Cole tradition of creative identification of a firearm in the scene with Blake saying "You see this don't ya? It's a lot more effective than a knife." He relates the story of how his dancing career was ended by an accident and he wanted to get revenge on Ballou.


23:10  After watching the apartment building with Logan, Casey leaves.

23:30 Blake keeps spilling his guts to Ann and Carling about the whole story. They're finally interrupted by Logan and Casey breaking down the door. Finally! A fight scene that sounds like a fight scene with no silly commentary!

24:20 An upset Ann is grateful for Casey and Logan barging in that he prevented Blake "from making two more angels out of us," which ties in with the episode title.

26:00 The Blue Note epilogue explains how Blake was crippled by Chapman seven years ago. Ballou and Blake had a contract to be dance partners, but Ballou wanted to pursue her dancing career with Chapman. An "accident" created by Chapman made Blake unable to dance, and the contract became void. When asked why Casey and Logan returned to the scene to save Ann, it turns out that Casey remembered that Ann's apartment was being painted. He thought that Ann might be staying at Carling's apartment, and that's when they realized the danger they were in... and stormed in to save them. 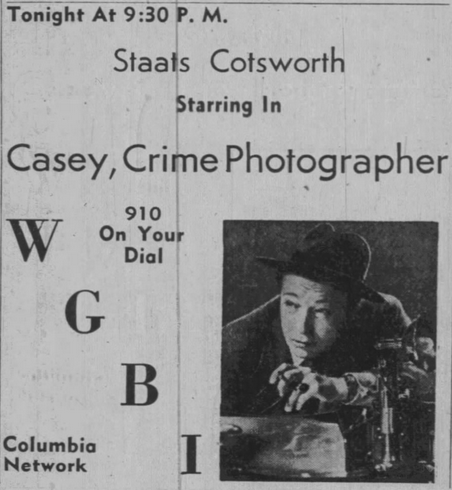