Lady in Distress is a run-of-the-mill Casey episode, enjoyable and entertaining, but nothing that makes it stand out. Parts of the script are not really believable, which makes it fitting that it was one of those selected to be adapted in the Casey comic book. It appeared in issue #3 as Damsel in Distress.

This episode has circulated as The Lady in Distress, but the ADC notes indicate there is no "the" in the title.

"Barbecue Tom" Morrissey, a Texas cowboy currently appearing in the big city' s annual rodeo has been abruptly accosted by a young and beautiful blonde Southern belle with a rich accent who tells him her life is in danger and she needs protection and - a hundred dollars. At the railroad terminal, where he takes her, she leaves him and is lost in the crowds after promising to meet him on the following day. She doesn't appear at the rendezvous and Tom, concerned only about her safety, indignantly rejects the suggestion that he has been the victim of a common and petty racket. Casey takes him to the Express "morgue" where Tom finds a picture of "Mary Belle." To Casey's great surprise, the girl of the photograph is a socially prominent Southern heiress. The mystery deepens when Casey learns that the girl has been recently appearing as a singer in a public clip joint. Casey and Tom learn that Mary Belle was kidnapped shortly after she left Tom in the terminal and that, not long before she appealed to the cowboy for protection, a fight occurred in the club where she sang, between a wealthy South American playboy and a stranger who cannot be identified. The description of his opponent, the unidentified stranger, and the memory of another similar quarrel that previously occurred in Bannister's place provides Casey with a clue that eventually leads him to a solution of the exciting mystery.

3:05 Ann relates a story at Pink Bannister's club that plays an important part of the story.

4:19 Before Morrisey relates the story of meeting "Mary Belle," Casey says "When it comes to women, I don't know from nothin'." The $100 Tom gives to "Mary Belle" is worth $1200 in today's 2020 dollars. We learn later that she asked for that much to be sure he looked for her if something bad happened to her.

9:48 We learn that Mary Belle Watson used the name "Lottie Dunbar" when she worked as the singer at Pink Bannister's club.

11:30 Pink tells one of his guys to follow Casey, Ann, and Tom and report back to him about where they go and to whom they speak about Mary Belle's disappearance. This leads to a car chase.

13:58 Casey spots Pink's bouncer getting into a car. Casey wants to be sure that he's being tailed. Casey develops a ruse to find out what Pink's man knows.

15:09 Casey purposely slams on the brakes going around a turn, Pink's bouncer misses the turn and goes into a ditch. The sound effects are not particularly good here, and the bouncer seems much too lucid after driving into a ditch in an air-bag-less and seat-belt-less vehicle where you can be thrown across the front seat or into the steering wheel. It doesn't make sense... but the story must move on...

17:42 Gallo starts spilling what he knows to Casey and Tom. He admits to killing someone at Pink Bannister's club. Casey doesn't believe Gallo's story, thinking he was framed by Bannister. Casey has a plan to make Bannister admit to the crime.

23:05 The police raid Bannister's club. Casey reveals the plot after they see the man Gallo supposedly killed is actually alive. Bannister was going to blackmail Gallo for a murder that didn't happen, like he had others. Tom and Mary Belle are re-united. 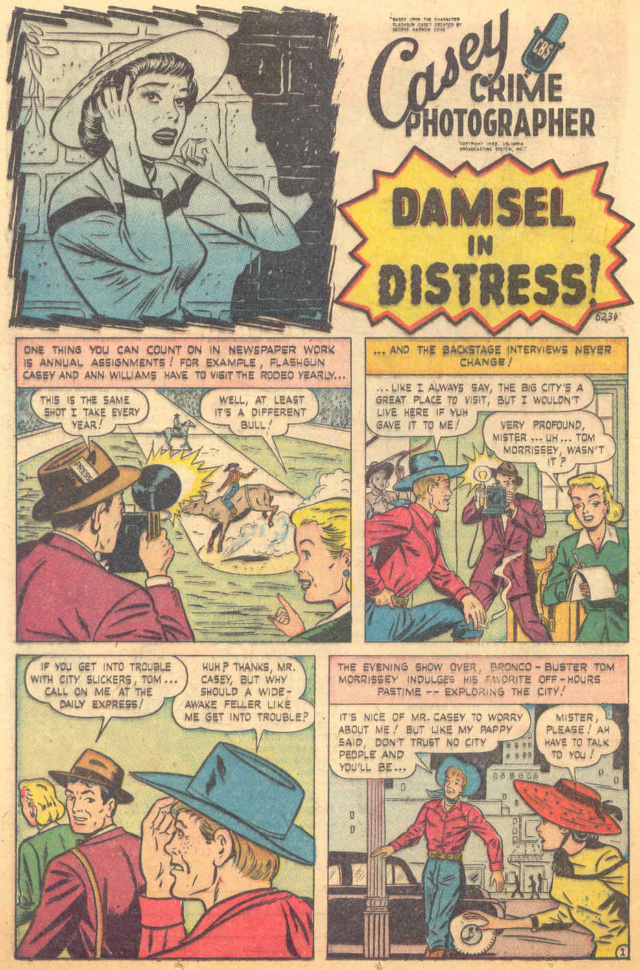